Dennis Grelk has been conducting HPV races at Hawkdown Downs Speedway in Cedar Rapids, Iowa, every year since 2006.
That also apparently is the first year he raced at the Michigan HPV Rally. He's made the long drive every year since from Donnellson, Iowa, to Waterford Hills, first with his parents and then with his wife.
For too long, I (Mike) have been saying, "One of these years I should go to Cedar Rapids," and then finding excuses not to.  This year, I ignored everything else I could have/should have done and at 6:15 on Saturday morning, Sept. 16, I was on the road.  334.5 miles later, I arrived at the speedway about noon Iowa time (1 p.m. in Michigan), in time for the start of the first race.
There were at most 20 HPVs racing, but I quickly noticed that most of them were homebuilt, though not necessarily raced by the builder, as opposed to manufactured.
Many of the homebuilts have been seen at the Michigan HPV Rally, so for this report, I'm focusing on the ones I hadn't seen.
Among those in the "previously seen" category were Dan and Amanda Zolyniak, who made the long drive from Toronto, Ontario – about 1,200km (746 miles), Amanda said.  Amanda raced the carbon fiber low-racer she and her husband built, while Dan was in the streamliner they also built.
Hawkeye Downs consists of a quarter-mile oval inside a half-mile oval, with the front strraightaway serving both tracks.  Some of the HPV events used both ovals, with vehicles making a sharp turn off the big oval onto the quarter-mile track and another sharp turn back onto the half-mile.
Wanting to get an early start back to St. Joseph, Mich., I skipped the Sunday events.
My one regret is that, instead of doing it all in a weekend, I didn't take an extra day or two to do some sightseeing along the way to or from Cedar Rapids.  Maybe next year.

Results of some events at Hawkeye Downs can be seen at midwesthpv.blogspot.com, then click on "2017 results." 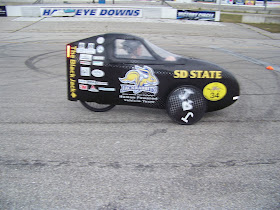 The South Dakota State University HPV racing team came from Brookings with two vehicles, faculty adviser Greg Michna, six students and one alumnus. They've competed in American Society of Mechanical Engineers competitions for three years, but this was their first time at Cedar Rapids.  Students took turns racing this streamliner – the fairing is carbon fiber – and an unfaired trike. 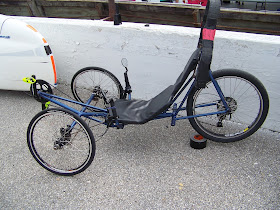 Here's the SDSU unfaired trike. With the streamliner, the Jackrabbits were the only college to compete this year in the ASME western states competition March 17-20 in Las Vegas, where they finished third overall and eastern states competition April 21-23 in Cookeville, Tenn., where they finished second. A new vehicle will be designed and built for 2018.
(To read more about the team, go to www.sdstate.edu, then under "University News" on the home page, find the article dated April 27, 2017, "Fast Wheels/SDSU engineering students pedal to victory.") 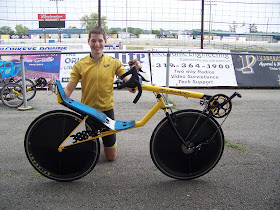 David Sommerfeld of Orange City, Iowa, designed and built his bike with inspiration from a Cruzbike. He used the same head tube angle to achieve proper handling, but designed the rest of the bike himself using CAD (computer aided design).  "It's designed to fit me," that is, neither the seat or bottom bracket position is adjustable to fit various size riders. The frame is made of 4130 aircraft grade chromoly.  David even made the rear triangle.  Wheels are 700c.  Weight is about 26 pounds. 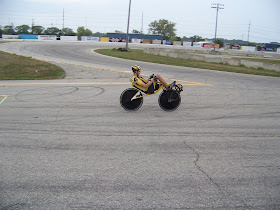 David started construction of the YellowJacket in April, rode it for the first time June 2 and as of Sept. 16, had ridden it about 1,500 miles – including RAGBRAI (402.7 miles), the annual seven-day cross Iowa ride in July. At Cedar Rapids, he finished second in the one-hour race for unfaired vehicles, at an average speed of 23.133 mph, and second in the "big horseshoe" race for unfaired vehicles.  This was the 13th HPV he's built, including ones he built and then radically altered.  (Scroll down to the bottom of this article to see another of David's creations.) 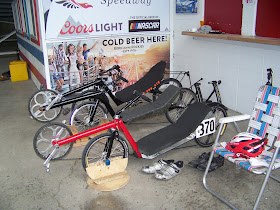 Three low-racers built by Rick Gritters of Pella, Iowa.  The red one is his latest and the one he raced.  He also raced his streamliner, with the fairing made of aircraft fabric over a tubing framework. 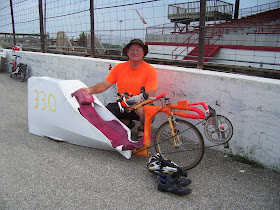 Aaron Stiles, who lives near Waterloo, Iowa, built this partially-faired/superstock bike in the early 2000s and has raced previously at Hawkeye Downs and ridden it in RAGBRAI.  The frame tubing is mostly stainless steel; the fairing is made of corrugated plastic, plus tape.  The rear wheel is 650c; front is 20-inch. 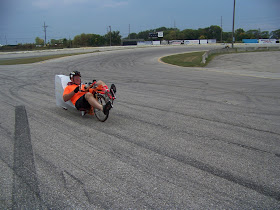 In addition to this low racer, Aaron also has built other recumbents, upright bikes for racing time trials, propellors for human-powered boats and fiberglass boats. 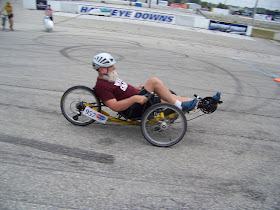 Bruce Gordon (above) of Buchanan, on his TerraTrike Zoomer, and Tedd Wheeler of Reed City, on his Rick Gritters-built low racer were the only Michiganians competing at Hawkeye Downs. 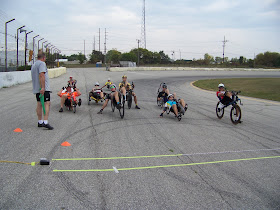 Entrants line up for the start of the 1-hour race for unfaired vehicles, on Saturday afternoon.  Event organizer Dennis Grelk of Donnellson, Iowa, on a bike he built, is on the front row, second from left.  He won, riding 58 laps at an average speed of 27.061 mph. 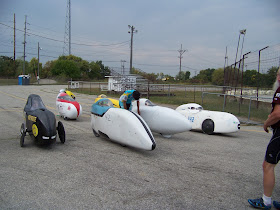 Lining up Saturday for the start of the 25-lap race on the half-mile oval for faired vehicles. Dennis Grelk, second from left in his Warren Beauchamp-built Barracuda, did the 12.5 miles in a time of 20:09.311, at an average speed of 34.979 mph. 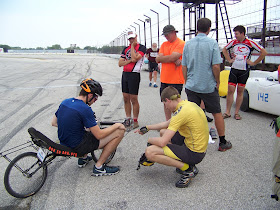 What do HPVers do when they're not racing?  Stand around or sit and talk about HPVs, of course.  The bike is one of Rick Gritters' low racers.

During our conversation at Hawkeye Downs, David mentioned that among the other bikes he has built is a low racer.  At my request, he sent me photos and a description. 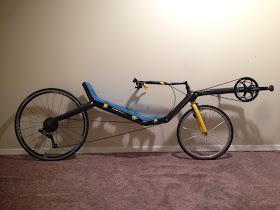 The lowracer is a fairly conventional design.The main chassis is carbon fiber tape wrapped around a pink insulation foam core. It rides on a 700c rear, and 20" front wheel. The rear wheel is driven by 13 feet of chain, which runs over four idlers (two on the drive side and two on the return side), with a 60 tooth chainring providing the gearing.
I would have raced it at Hawkeye Downs, but the lowracer has a front brake only, rather than the two brakes required by HPRA rules. The front end is still a bit flexible, too. (I suspect the YellowJacket with wheel covers would have been faster, anyway.) 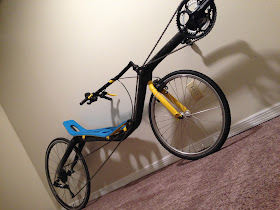 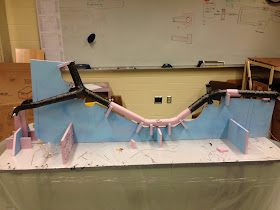 Note:  The Michigan Human Powered Vehicle Association was formed in July 1984 and officially came to an end Sept. 30, 2016, due to a lack of active members willing to run the organization. However, for the foreseeable future, the Michigan Human Powered Vehicle Rally will continue (the 2018 rally will be the 34th annual), as will this blog, website (www.mhpva.org) and Facebook page (www.facebook.com/mhpva).Articles for this blog are always welcome and needed.  E-mail me at mikethebike2325@comcast.net.             Mike Eliasohn, editor