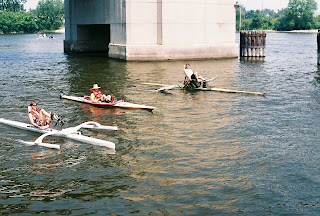 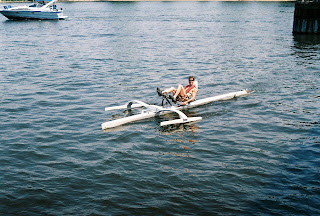 DANIEL GROW idles in the St. Joseph River on the pedal-powered, propeller-driven boat he built. It’s 20-feet long and with the outriggers, 8 feet wide. Almost everything is made of foam and covered with fiberglass or carbon fiber.

Article and photos by MICHAEL ELIASOHN

ST. JOSEPH – Amidst the pleasure boats on the St. Joseph River near Lake Michigan on a Saturday morning in June 2007 were three boats that didn’t look like any other boats.
They didn’t have motors or sails or paddles or oars. What each of the three boats had was a person pedaling in a recumbent position, with a bicycle chain driving a propeller. Each of the boaters was also the builder, at least in part.

The other two participants were Jake Free of Elkhart, Ind., who built his first pedal-powered propeller-driven boat in 1977 and manufactures parts for other human-powered boat builders, and HPV builder/racer/Webmaster Warren Beauchamp of Big Rock, Ill., who was pedaling the third boat he has built.

Grow said he decided to build his own boat after attending Beauchamp’s annual Hydrobowl Human Powered Boat Rally in 2004 in Rockford, Ill. Grow competed then on a surf ski, which is paddled like a kayak, but has a foot- controlled rudder.

He discovered the pedal-powered boats were faster, so decided to design and build his own.
The boat is Grow’s own design. “I wanted to test an idea for the hull shape,” he said.
The hull is 20 feet long, 12 inches wide and at the most, 8 inches deep. It sinks into the water about 4 inches.

He made the hull by tracing the cross sections onto 2-inch thick pieces of foam. He then cut out each section using a hot wire, glued each section to the next with epoxy – that’s a total of 120 sections – then sanded the foam hull to the final shape. Grow then covered the foam hull with from one to four layers of fiberglass and/or carbon fiber.

The outrigger floats are 5 feet long and 8 feet apart. Construction of the outrigger assembly, which easily detaches for transporting the boat, was similar to that for the hull.
Grow also made the seat and propeller. His first driveline incorporated a propeller shaft, but had too much friction, so he replaced it with part of a bicycle frame upside down, so the pedals would be high enough. The chain twists as it runs to a sprocket driving the propeller. 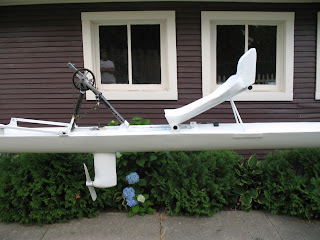 THE DRIVETRAIN OF DANIEL GROW'S BOAT. The propeller is on the front of the strut and "pulls" the boat forward, that is, Grow moves through the water going forward, not backwards.

The boat weighs 50 pounds maximum, much less than similar boats, he said.
Grow sits on top of the hull, not in it. At speed on a calm surface, only the trailing edges of the floats are in the water.
Grow first lauched his boat in 2005 and usually only gets it in the water three times a year, for his event and the races organized by Free in Elkhart and by Beauchamp.
At those other events, Grow has won sprint and drag races, which don’t require turning . “It’s basically like a 20-foot long rudder in the water and it doesn’t want to turn,” he said about his boat, which for that reason works best in a straight line.
During Grow’s gathering on June 16, he, Beauchamp and Free pedaled their boats about 1.5 miles up the St. Joseph River from the launch site near where it enters into Lake Michigan.
Free’s “Liza” is a monohull, 24 feet long and 10 inches wide. The patented pedal drive is laminated into the hull and has been pedaled hundreds of miles so far, he said in an e-mail.
The boat is stabilized by two outrigger floats that are out of the water when the boat is steady and skim the surface when needed to stabilize it.
In contrast to Grow’s and Free’s homebuilts, Beauchamp started by buying a manufactured Necky sea kayak, 19 feet long and made of Kevlar.
He then made an opening in the hull, called a dry well, to accomodate a drop-in drive unit made by Seawind Boat Corp., which has the propeller at one end and the pedals at the other end. The drive unit can be removed easily to transport the boat or to unclog the propeller.
Pedal powered, propeller-driven boats have several advantages over using oars or paddles, according to Grow:
+ Power is continuous, rather than the in-and-out of the water propulsion provided by oars or paddles. In rough water, it may be difficult to keep oars or paddles in the water, but a propeller under the boat is always providing power.
+ The most efficient rowboats use sliding seats so that the rower is using his leg muscles as well as his arm, shoulder and back muscles. But with the rower moving back and forth as he rows and the seat slides, the bow and stern rise and fall.
In contrast, pedal powered boats go through the water smoothly since the rider isn’t moving back and forth.
+ Rowing at maximum efficiency requires learned skills. Riding a pedal-powered boat is no more difficult than riding a bicycle.

On the Web:
www.humanpoweredboats.com, which has a link to Free’s Web site.
Beauchamp is Webmaster of the www.recumbents.com site. To read about his boat projects there, click here.
Grow can be contacted at grow.daniel@gmailcom

This article originally appeared in The Herald-Palladium newspaper, St. Joseph, Mich., on July 27, 2007. Some minor changes have been made.
Posted by mike at 10:10 PM 1 comment: