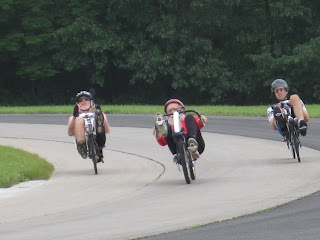 In the Saturday morning one-hour time trial at the Michigan HPV Rally are, from left, Jeff Hunn on his titanium TiCuda, Bruce Gordon on his front-wheel-drive Zox and Mike Mowett on his Challenge Baron. (Dan Lonowski photo. All other photos by Mike Eliasohn.) 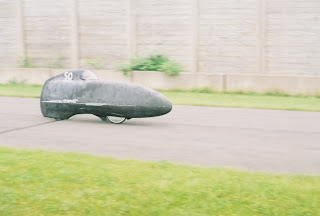 TODD REICHERT powered the University of Toronto's streamliner to the fastest speed ever in the 200-foot flying start sprints, 47.02 mph. A graduate engineering student, he was one of six members of the university's HPV team to make top-speed runs in the streamliner.


To see the charts showing complete results, go to www.recumbents.com/wisil/racing2010/waterford2010_results.htm 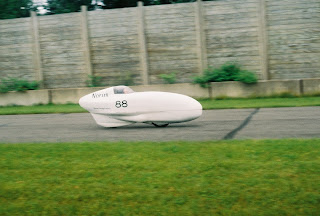 MHPVA PRESIDENT Mike Mowett bought the used Norus streamliner in April 2007, then endured three years of ribbing from fellow HPVers for owning it, but not riding it. Finally, at this year's rally, he rode some practice laps on Saturday evening and then on Sunday morning, shown here, pedaled it to 41.45 mph in the 200-foot sprints. (Mike Eliasohn photo) 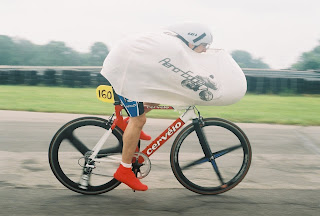 IN ADDITION to his Baron low racer and Norus streamliner, "Upright Mike" Mowett raced his carbon fiber Cervelo. He bought the frame off Craigslist for $700 from a fellow in New Orleans, mounted all the components the same week as the Michigan rally, then on the Tuesday before the rally raced it in a time trial at Waterford Hills. He's shown here during the one-hour time trial. In the hill climb, Mike finished first in the superstreet class and second overall with a time of 21.37 seconds. 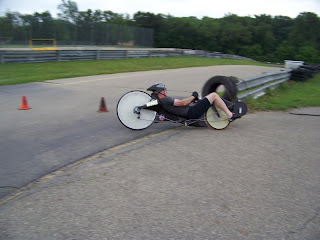 SEAN COSTIN on his NoCom low racer won the stock class, which had the most entries (16). He also set the fastest time ever for the stock class (no streamlining added except for wheel covers) in the 200-foot sprints, 42.75 mph. Notice the lonnnnnnng chain. 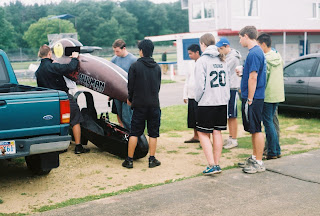 ON SUNDAY MORNING, before the racing started, members of the Rose-Hulman Institute of Technology and University of Toronto human powered vehicle teams were talking HPV technology, of course. This is the Rose-Hulman streamliner that's being dissected. 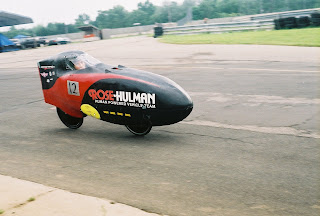 HERE'S THE Rose-Hulman streamliner. I (Mike E.) think the photo was taken during the one-hour time trial, which would mean the rider is Daniel Sing. He was one of four team members to race the streamliner during various events. 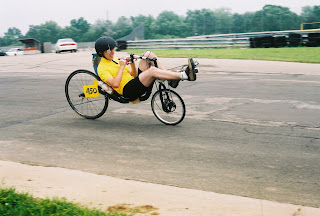 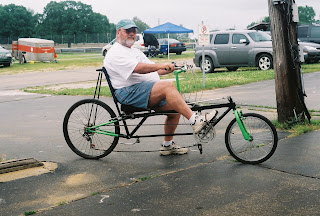 TERRY GERWECK intended his new recumbent as an around-town errand runner. He's shown here at the Michigan HPV Rally. He is a co-founder of the MHPVA.

Terry Gerweck of Monroe built his first recumbent about 30 years ago and several since then, but hadn't built anything in recent years, but has now made up for the deficit. He had his latest recumbent in unfinished form at the MHPVA winter meeting in February. Except for a few refinements, it's now done. He had it at the Michigan HPV Rally June 12-13, where these photos were taken.
Here's Terry's description:
The bike was designed (I dislike that term) as a 'round town errand runner with a reasonably upright seating position and as short a wheelbase as possible on a long wheelbase recumbent with a 20-inch front and 26-inch rear wheel. 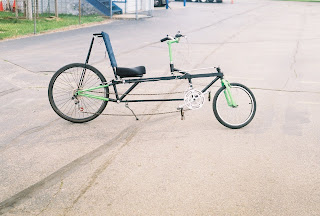 I wanted to get away from tiller steering to simplify mounting of a small fairing eventually. Besides, I like the way remote steering feels.
The bike should accommodate inseams from 28 to 32 inches. Seat height is 23 inches and wheelbase is 64 inches.
It is truly a recycled bike, with frame parts from five or six bikes, home furniture, and commercial store fixtures. Seat parts include used seat parts and assorted wheelchair parts. (Editor: The seat bottom is from a used Sun EZ-1 recumbent. Terry made the seat back.) Drive and other components are from the assorted collection of accumulated parts in my garage.
The crankset, a Campagnolo Record triple, is worth more than the rest of bike. Pedals also are Campagnolo.
Paintings was done using rattle/spray cans. The color scheme just happened. The stem I used was already green, so I picked out a can of matching gloss engine enamel from AutoZone for the accents. The rest of the frame was covered with satin black Rustoleum. Satin covers a whole host of "less than perfect" preparations and still has a serviceable finish that a flat paint lacks. 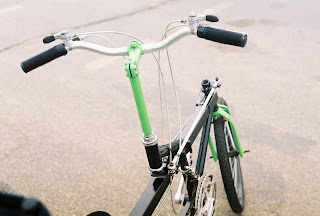 TERRY PREFERS this remote steering, using universal joints, over a conventional handlebars/stem arrangement, which can result in a "tiller" effect.
Posted by mike at 11:26 PM No comments: 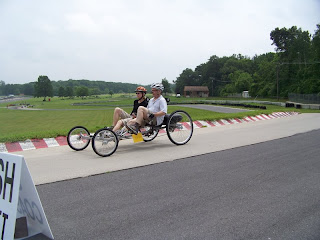 DAN AND BRENDA LONOWSKI on their Quadster top the hill during the hill climb-coast down portion of the Urban Transportation Contest on June 12. (Mike Eliasohn photos)

Dan and Brenda Lonowski of Novi participated in the Urban Transportation Contest on their Quadster HPV, which Dan designed and built. Construction started in July 2009 and he finished in December. "I've had the idea for probably 10 years," he said.
There are two separate 21-speed (3x7) drivetrains, one for each rider. The rider on the left does the steering and braking. Both pedal independently at their own cadence. 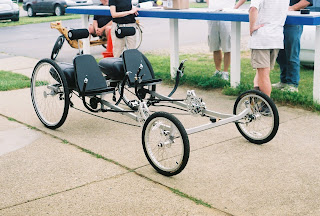 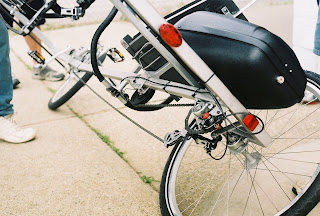 Dan welded the frame from 1- by 1-1/2 inch 16 gauge mild steel tubing. With its long wheelbase, the frame flexes slightly to provide passive suspension. Front wheels are 20x1-3/4; rears are 700c. There's an Avid disk brake for each rear wheel.
Dan also made the rear wheel hubs. Each short rear axle is supported by two pillow bearings.
He plans to replace the seats shown with mesh seats. Position of each seat is adjustable to accomodate various sized riders.
Some dimensions: Weight, 73 lbs. (33.2kg) ; wheelbase, 68 in. (1725mm); width, 47.2 in. (1200mm); length, 92 in. (2330mm).
Dan and Brenda have undertaken 10- to 20-mile rides on the Quadster, including some on unpaved trails.
Dan says the Quadster is another aspect of human-powered vehicles -- for utility and recreation, rather than speed. He said some day there might be a market for such vehicles, starting with bicycle rentals in tourism areas and pedestrian communities.
Posted by mike at 10:51 PM 3 comments: 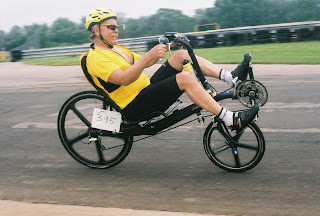 This year, six vehicles were entered in the urban transportation contest at the Michigan Human Powered Vehicle Rally. Despite this small sample, there was great variety among the vehicles and competitors, including veterans and first-time participants. All seemed to have fun with the event, taking on the various tasks with the proper attitude.
Contestants, vehicle numbers, their vehicles, and their final scores were:

It was a close finish between Dennis and Wally, both veterans of past UTC events. Wally won with a score close to what he earned in previous years riding a different Lightning bike, while the powerful Grelk improved considerably over his score in 2008, using a similar upright bike.
Wally's carbon fiber R-84 scored much better on weight (27 lbs vs. the Surly's 57) and aerodynamics, of course, while vision, visibility, and a small passenger bonus allowed the cargo bike to make up most of the difference. These two competitors also had the best times in the simulated grocery run, which helped separate them from the rest of the field. The top two finishers each received a modest cash prize.
Grocery abuse was unfortunately widespread this year, which caused three of the four other competitors to fall off the lead. Multiple items were actually ejected from one vehicle during its exit from the slalom part of the course.
It was very unusual to have two leaning tricycles in the contest. These vehicles demonstrated the two shortest braking distances, but in each case their relatively low rider position decreased their scores. A high ratio of vehicle to operator weight and rather large turn radius hurt the Rose-Hulman entry, while Jensen's trike was not well adapted for carrying groceries. The long time required to repack the grocery items (only a single bag’s worth) caused his entry to post the lowest score in the grocery run.
The Lonowski side-by-side quadricycle was competitive, despite its large size and weight. It performed very poorly on the coast down test, which might have been due to a correctible mechanical problem. Its braking was excellent, stopping only a foot and a half farther than the best vehicle this year, at the end of a pretty fast grocery run.
The velomobile entered by Jim Iwaskow could have ranked higher if it had lights, but its turning radius was huge. While it may be a nice feature, I do not award points specifically for the fact that a cigarette stays lit within the WAW fairing while underway, and the small bonus for carrying a pencil was not enough to overtake fourth place.
I want to thank all of the contestants for their enthusiastic participation, the MHPVA for its support, and especially Rick Wianecki for helping to run the grocery errand part of the event. Even with a late start we were able to run all six contestants and finish before the start of the kilometer runs. 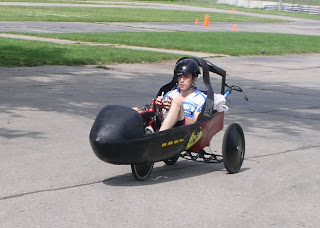 DANIEL SING rode the Rose-Hulman Institute of Technology entry to third place. The rear axle assembly, which enables the machine to lean when cornering, can easily be replaced with a single rear wheel. Cargo capability was built in behind the seat. (Paul Pancella photo)
Posted by mike at 9:36 PM No comments: