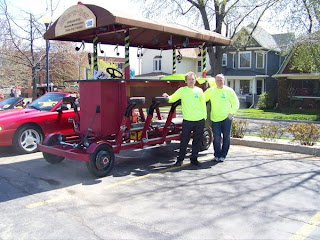 KEITH BROWN (left), with his father, Kelvin, and his Bike-N-Bar, powered by four riders on each side. There's five seats on each side, but there wasn't space to install a crank for the rearmost passengers.

Some cyclists like to have a beer after their ride.
Keith Brown's Bike-N-Bar enables cyclists to have a beer (or non-alcoholic beverage) while they're pedaling. And they don't even have to worry about steering straight.
The Holland resident's creation has 10 seats, eight of which include pedals.
The chains from the eight cranksets run to a driveshaft that runs to a differential/rear axle from a Ford pickup.
The driver is “behind the bar,” so to speak, so doesn't pedal. There's usually also a bartender there.
“I built it in my parents' garage,” Brown said prior to the Bike-N-Bar, powered by family members and relatives, taking part in the Blossomtime Grand Floral Parade in St. Joseph and Benton Harbor on May 2. Construction took about a year, finishing in April 2008. His father, Kelvin Brown, helped.
Keith's sole “blueprint” was a photo off the Internet of a similar creation in Amsterdam in the Netherlands (as opposed to Holland in Michigan.). After that, “I started guessing.”
The only bicycle parts are the one-piece steel cranks, chains and freewheels, all purchased new. There's a freewheel on the driveshaft for each crank, so each pedaler can stop pedaling. The chains on the left side are twisted into a figure-8 so people on the left side of bar can still pedal in a forward motion.
Brown made all of the front end components except the rack and pinion steering, which is from a Ford Mustang II.
There's an adjustable tensioner for each chain and the position is adjustable for each seat. Brown made chainguards from plywood for each chain. The upholstered seats are shaped like bicycle saddles, but were custom made for the Nike-N-Bar. 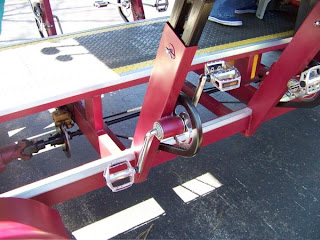 EACH OF the eight cranks run to this driveshaft, which connects via a universal joint to the rear axle/differential from a Ford pickup truck. The only brake is this disk brake is from a Honda motorcycle.

The frame is made from 1-1/2 by 4-inch rectangular steel tubing. The wheels and tires are automobile “emergency spares.”
The sole brake consists of a disk brake from a Honda motorcycle mounted on the driveshaft. Crossing the St. Joseph River from St. Joseph into Benton Harbor means going downhill, then up over the bridge, then downhill again. Despite that and 12 people on board, Brown said, “the brake held great” and they got up the hills okay.
A marine deep cycle battery powers headlights, taillights and lights under the canopy.
Brown guesses his creation weighs at least 600 pounds.
In addition to parades, the Bike-N-Bar is available for rent and Brown has had it at weddings, parties, 50th birthday parties and other events. If interested, e-mail Bikenbar@yahoo.com or call 616-405-6779.
Brown, 24, does engineering work and maintenance at Agritek Industries in Holland, which is letting him use its facilities for his new project. He's building a motorcycle three-wheeler, with the two wheels in front and power from a 900cc Honda motorcycle engine. 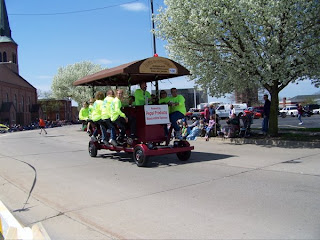 THE BIKE-N-BAR, with 12 people on board, in the May 2 Blossomtime Grand Floral Parade in downtown St. Joseph (shown) and Benton Harbor.
Posted by mike at 10:59 PM 4 comments: