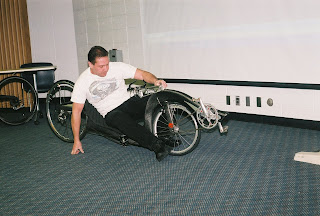 JOHN MORCIGLIO of Waterford brought two carbon fiber low racers he built. He's climbing on (or laying down on) a bike he built for Illinois HPV racer Alan Arial. He built the bike he is holding for his wife, still missing some key parts, but as of the meeting, it was for sale. It's not as low as Arial's bike. John built his first bike in February 2008. "Hopefully I can keep on building bikes for a living," he said. John also makes disk wheel covers, forks and handlebars. If interested, go to www.thundervoltman.com or call 248-499-9915. 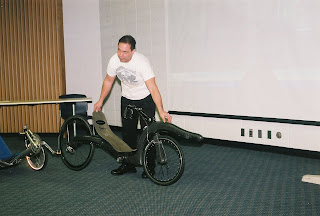 Despite terrible driving conditions, 15 people were brave enough (or foolish enough) to come to the Michigan Human Powered Vehicle Association annual meeting Feb. 21 in Erickson Kiva on the Michigan State University campus in East Lansing.
Prior to the start of the meeting, Tim Potter, coordinator of the MSU Bikes program, gave a tour of the program's shop in nearby Bessey Hall. (www.bikes.msu.edu) Our thanks to Tim for arranging use of the meeting room.
There was extensive discussion of the Ford Human Powered Speed Challenge, to be conducted by the MHPVA July 17-19 on the 5-mile oval at the Ford Motor Co. proving grounds near Romeo, instead of our usual Michigan HPV Rally at the Waterford Hills sports car racing track. Recumbents.com Webmaster Warren Beauchamp has created a special Web site for the event, so all information about the event is/will be posted there: www.recumbents.com/home.asp?URL=wisil/fordchallenge2009
All officers were reelected: President: Mike Mowett, St. Clair Shores; vice-president, Mike Eliasohn, St. Joseph; secretary, Paul Pancella, Kalamazoo; treasurer, Bill Frey, Grosse Pointe Farms; and directors-at-large, Paul Bruneau, Portage; and Don Smith, Sterling Heights. 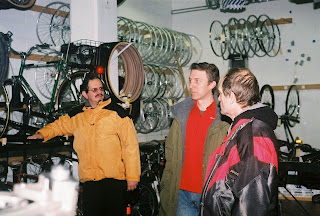 PRIOR to the start of the annual meeting, MSU Bikes coordinator Tim Potter (center), gave a tour of the program's shop. Reconditioned bikes are available for sale or rent, parts are for sale and repairs made. Donation of bikes and parts is welcomed. (www.bikes.msu.edu) 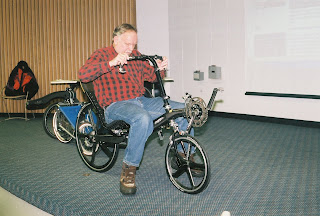 WALLY KIEHLER of Grosse Pointe Woods brought his new carbon fiber Lightning R84. Weight, once the the chain and cables were installed, is under 25 pounds. As of the meeting, Wally was debating whether to transfer the full fairing from his Lightning F40 to the R84. Catrike Speed in the background belongs to Chris Evans.
Posted by mike at 10:51 PM No comments: