Saturday, Jan. 20, was the fifth annual gathering at the home of Bruce and Linda Gordon in Buchanan in southwest Michigan for the HPV community.
The "official" reason for the gathering is to review  the upcoming Human Powered Race America schedule and discuss possible rule changes and insurance matters.
Here's the possible schedule, of which only the Michigan and Nashville, Tenn., events are "for certain" as to being held and the dates.

In addition to HPRA matters, there also was lots of conversation, some of it about human powered vehicles, some "show and tell" and lots of food.  Thank you, Bruce and Linda. 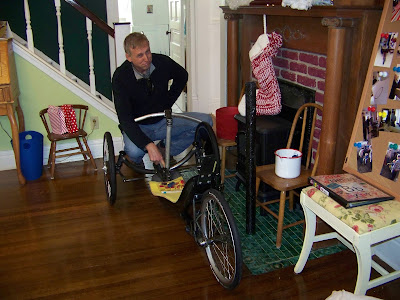 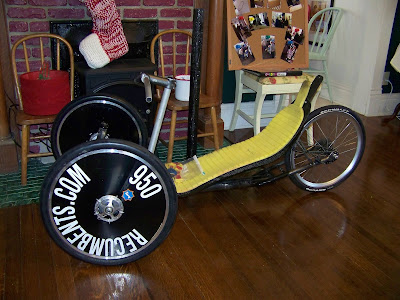 Another view of Warren's project. It will be rear-wheel-drive.  All three wheels are 20-inches.
The steering setup is temporary and will be replaced by levers on each side of the rider. 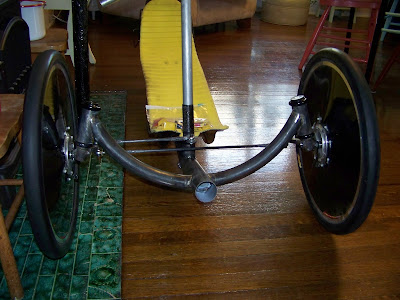 A front view shows Warren's beautifully smoothed brazed joints.  The carbon fiber boom tube holding the bottom bracket will fit over the stub in the center of the axle. 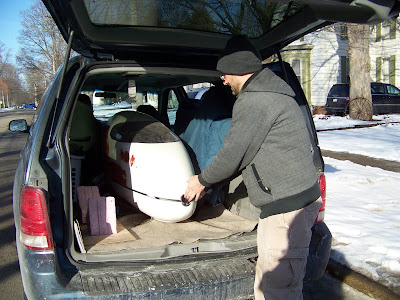 Mike Mowett drove from Detroit in his empty van and went home with the Velox XS streamliner he's buying from Garrie Hill, who brought it from his home in Granville, Ohio. 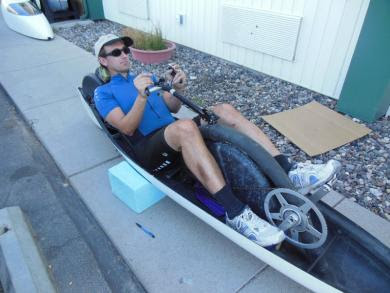 Mike first saw – and sat in – the Velox XS at the World Human Powered Speed Challenge at Battle Mountain, Nevada, in 2012.  Notice the carbon fiber frame. The chain drives the rear wheel.  The streamliner was built by Hans van Vugt of the Netherlands and ridden in 2012 by his wife, Ellen, to 70.27 mph/113.08 kph. In 2016, when Garrie Hill was the owner, Florian Kowalik of Deerfield, Ill., pedaled 65.93 mph/106.10 kph at Battle Mountain to set the International HPV Association junior class record (ages 15-17). 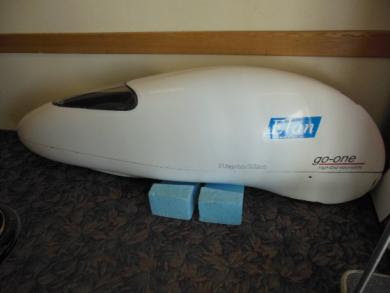 Mike took this photo of the Velox XS in 2012.  Hans then built another streamliner for his wife, so sold this one to Garrie Hill in 2013 and Mike transported it from Battle Mountain to Garrie's home.  Some work is needed before it's ready for Mike to race.  "This is a much more aerodynamic bike that the Norus (Mike's old streamliner, which he still owns)," he said. Mike's top speed on the Norus at Battle Mountain was 59 mph, so his goal in the Velox is to "definitely" go faster.
Posted by Michigan Human Powered Vehicle Association at 2:58 PM No comments:

The 34th annual Michigan Human Powered Vehicle Rally will be May 19-20 at at the Waterford Hills sports car racing track on the Oakland County Sportsmen's Club grounds in Clarkston, near Pontiac – the location since 1986.
This is the oldest such event in North America and is open to riders of all human powered vehicles — recumbents, streamliners, regular bicycles, tandems and hand cycles.
For those who remember the frost-on-car-windshields temperatures at the 2014 rally – the last time it was held in May – and wonder why we couldn't do it again in June, the answer, according to rally organizers Tedd and Donna Wheeler, is the only dates available at the track that month were June 1-2.  They thought that weekend might present a conflict with graduation-related activities for too many potential competitors.
The schedule of events and other information for May 18-19 will be posted here once it's all determined.
Posted by Michigan Human Powered Vehicle Association at 3:17 PM No comments: