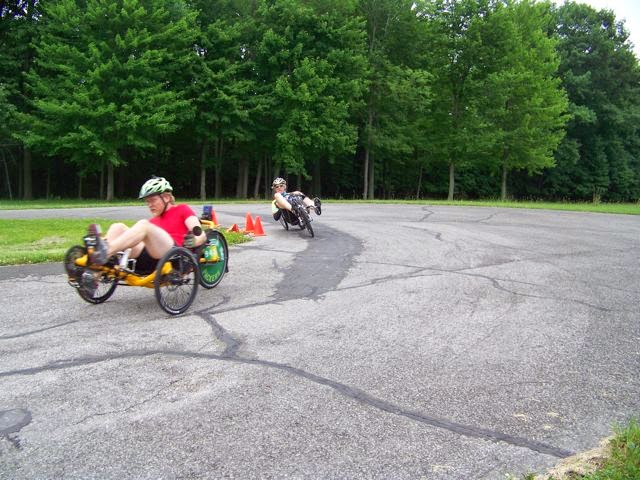 Daryl Hanger on his Catrike Trail leads Warren Beauchamp in one of the races. Daryl was the overall winner. Warren had the only leaning-trike at the rally – a front-wheel-drive low racer he built, fitted with a Dennis Grelk-built two-wheel attachment that bolts to the rear dropouts.

Words and photos (except one) by Mike Eliasohn; results by Bruce Gordon

The first Berrien Tricycle Rally took place Saturday, June 21, 2014, at Rolling Green Raceway, a quarter-mile kart racing track near Buchanan in Berrien County in the southwest corner of Michigan.
The rally was organized by, and was the idea of long-time HPV racer Bruce Gordon of Buchanan, with help with help from his wife, Linda. (Thank you, Linda, for the homemade muffins and sandwiches.) 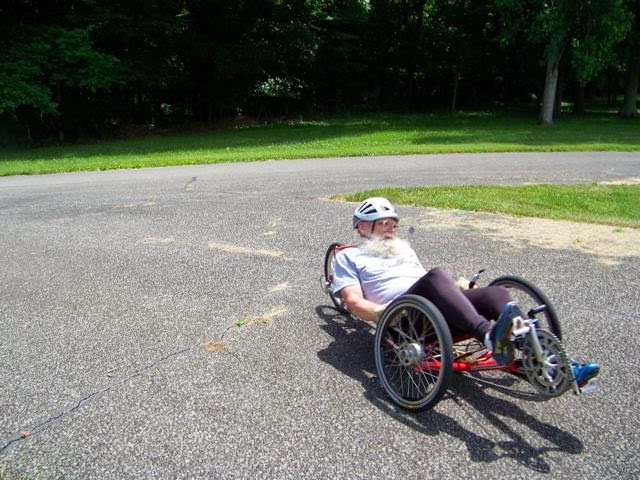 Bruce Gordon, shown here on his Greenspeed SLR during the time trial – three laps of a short triangular section of the track – organized the first Berrien County Tricycle Rally.

Separate races by fours, based on hot lap times, were won by Daryl Hanger, Chris Cortez and Dora Cortez. A race for non-prize winners was won by Jim Iwaskow. Daryl Hanger's team won the relay race, and Daryl was the quickest in the short track time trial. 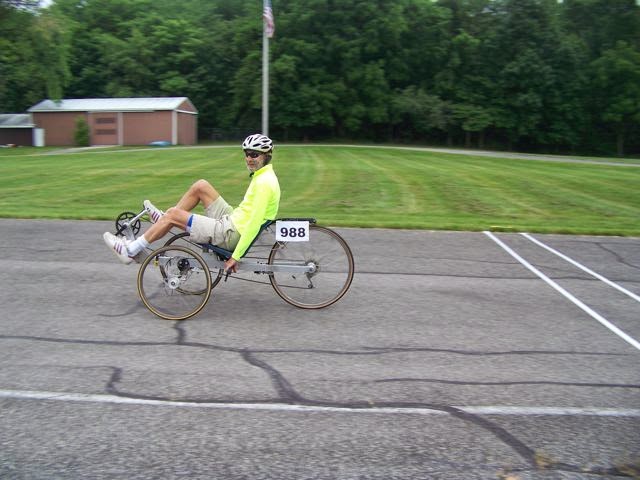 Jim Iwaskow on the Mike Sova-built trike, which Mike gave to him. It may look crude – notice the "stadium seating" – but it has rear suspension. (The pivot is the small circle behind the handlebars.) Jim also rode the trike the following day in the Berrien County Cancer Service Bike Ride. 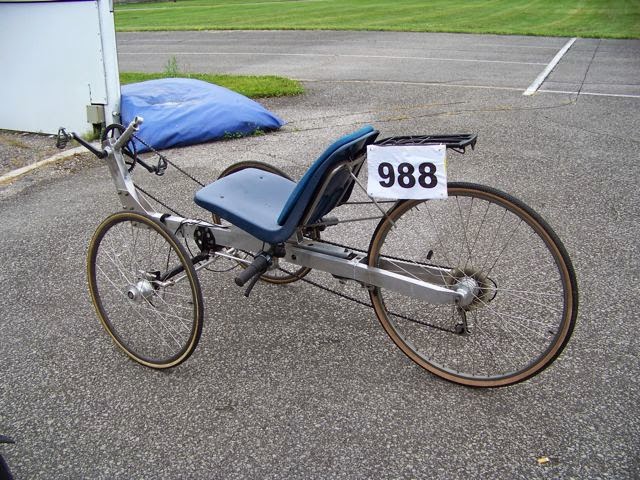 Jim, from Richmond Hill, is listed twice because he competed on two vehicles, an ICE Vortex (7th place) loaned to him by Garrie Hill, and an aluminum (welded and bolted) trike (11th place) built by Mike Sova of Toronto "some time ago," Jim said, possibly a couple of decades or more. Sova, who gave the trike to Jim, has gone on to building streamliners raced at Battle Mountain. Garrie, from Granville, Ohio, raced his Greenspeed SLR.
Daryl Hanger, from Greenwood, Ind., finished first on a Catrike Trail, which isn't built for racing. (In other words, if he had a racing trike, he would be even faster.) 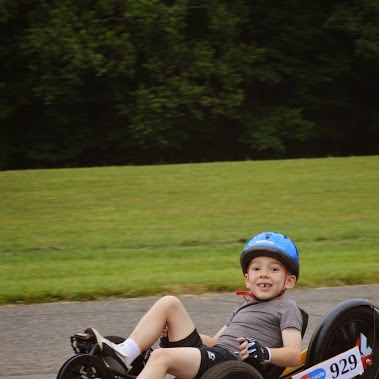 Clifford Lofgren finished last, but he has a good excuse – he's only 5-1/2 years old. He's Bruce and Linda's grandson and the son of Eric and Charlotte Lofgren, who also live in Buchanan. He raced a kid-sized KMX trike and likely is the youngest-ever competitor in Human Powered Race America sanctioned competition. (Bruce Gordon photo) 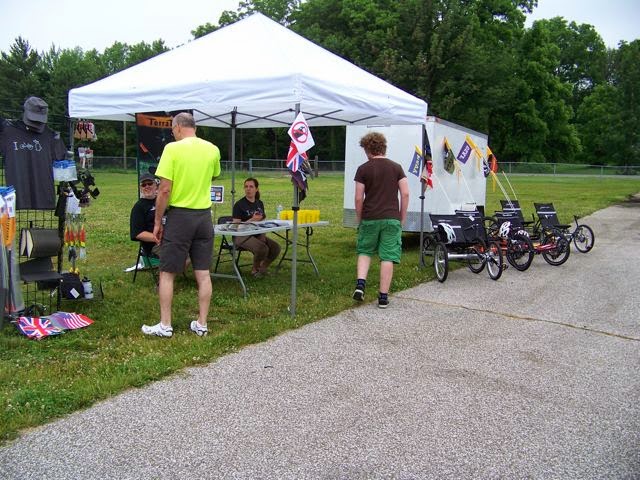 Special thanks to Grand Rapids-based manufacturer TerraTrike (www.terratrike.com). Director of marketing Jeff Yonker, his son, Gabe, and marketing assistant Michelle Oswald brought several TerraTrikes for test rides, plus a display of accessories. Likely the most popular for test rides was the Rover Tandem.

Also present for a couple of hours to spectate was Jerome Hediger, Greenspeed USA distributor, who rode his BMW motorcycle (only two wheels) from Highland in southern Illinois. For the unknowing, Greenspeed is an Australia-based recumbent trike manufacturer (www.greenspeed.com.au) 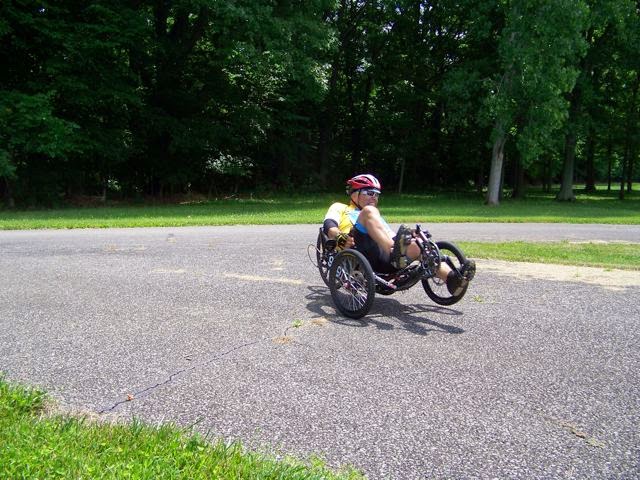 Chris Cortez lifts a wheel during the time trial on a short triangular section of the Rolling Green Raceway. The kart racing track is twisty and isn't level. 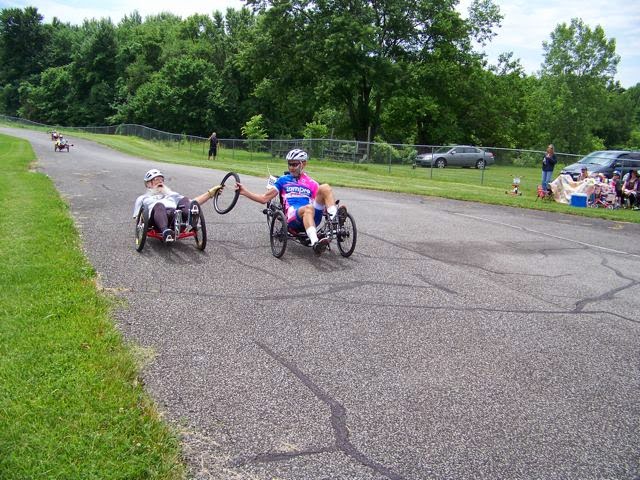 In addition to the pure racing events, there were some "fun" events, including a relay race, with competitors passing a tire, instead of a baton. Here, Bruce Gordon passes the tire to Jim Iwaskow, who was riding Garrie Hill's ICE Vortex. 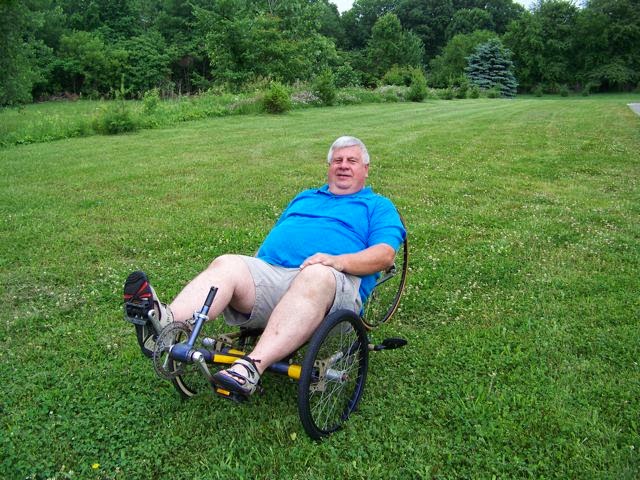 Mark Bannan of Owosso came to the rally to spectate, with this trike that he built in the 1980s. Back then, he also built several other two- and three-wheel HPVs, all from aluminum tubing.In addition, from 1990-98, he organized the Delta College Challenge HPV races on the Sunday following the Michigan HPV Rally, which back then was on Saturday only.rail 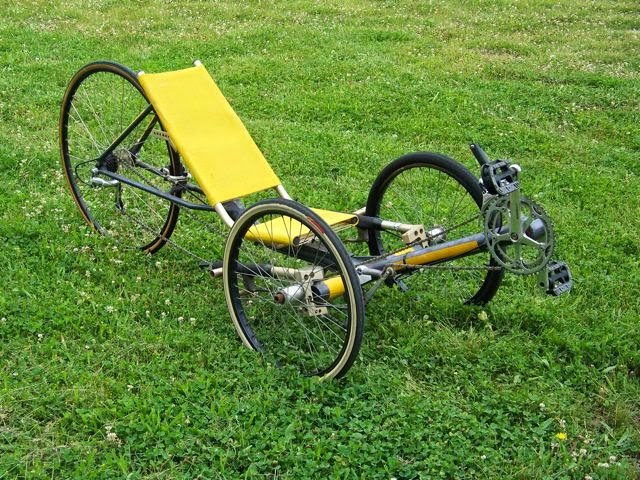 leads Warren Beauchamp in one of
Words and photos (except one) by Mike Eliasohn; results by Bruce Gordon