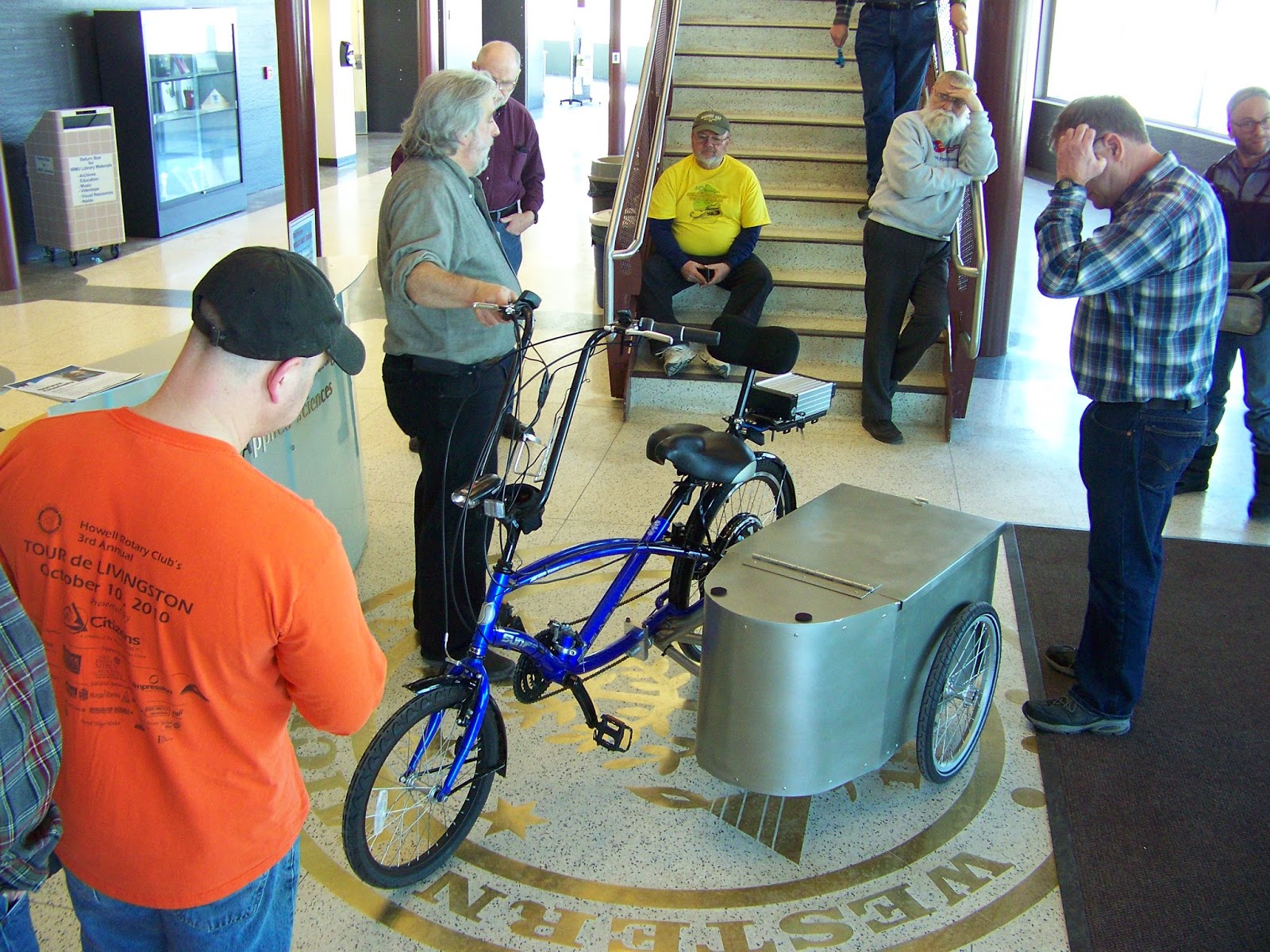 David Middleton, WMU adjunct assistant professor of product design, talks about the Velo-Electric Sidecar, a project by three senior product design students. It's attached to a no-longer-produced Sun Sunray bike. There's an electric motor in the rear hub, a battery on the rear rack and inside the sidecar, a larger battery and space for groceries or other cargo.  Bottom photo: What makes the V-ES "trick" is that the upper strut can be unbolted, thus allowing the rider/bike to lean when cornering. But if roads are slippery, the strut can be attached to the bike to create a "solid" three-wheeler for extra stability.  (Photos by Mike Eliasohn unless indicated.) 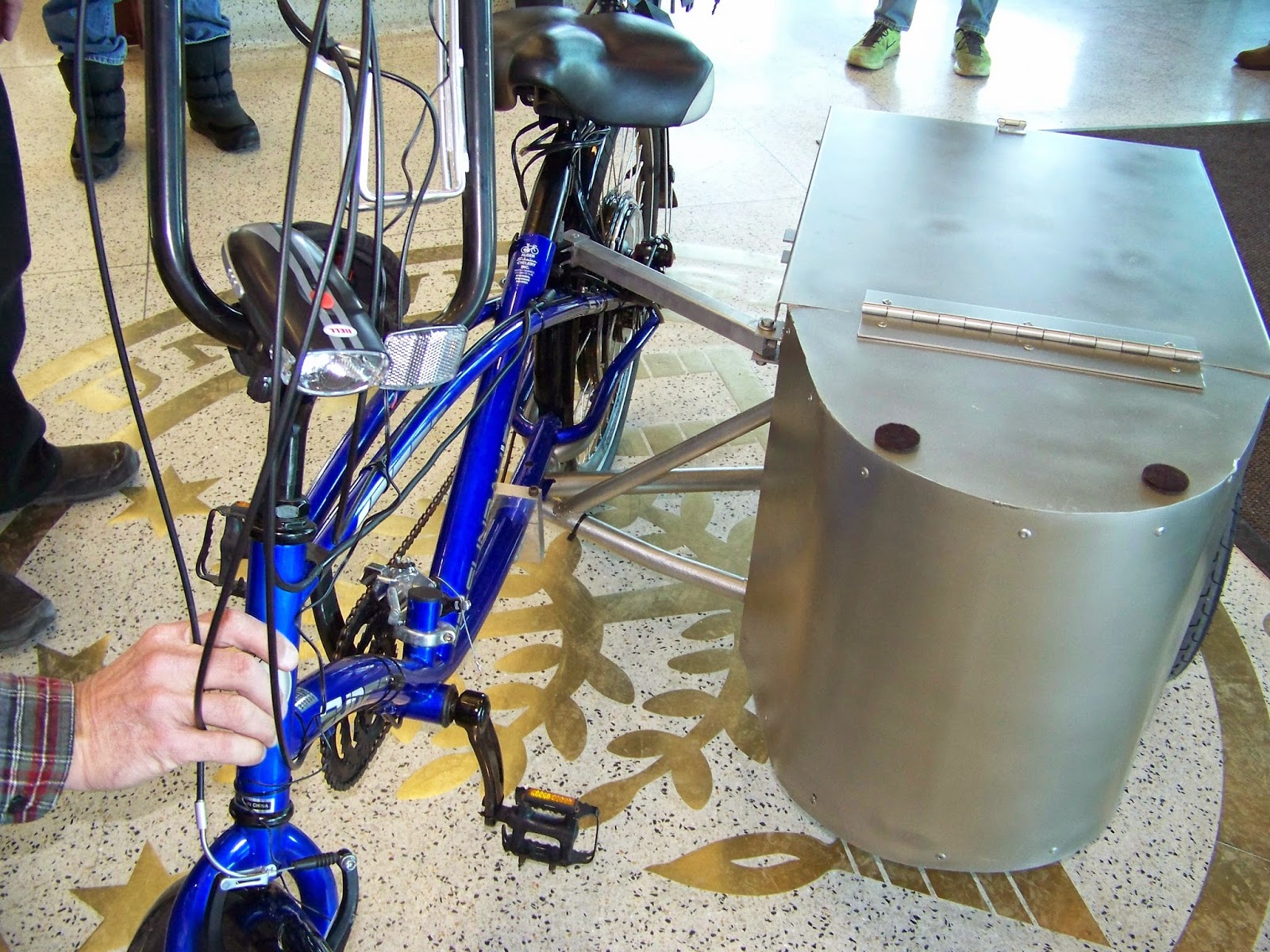 The annual meeting of the Michigan Human Powered Vehicle Association took place Saturday, Feb. 28, in the College of Engineering and Applied Sciences building on the Western Michigan University Parkview Campus in Kalamazoo. Twelve people attended.
President Mike Mowett had to be at work, so was unable to attend. Vice President Mike Eliasohn presided in his absence. Following are the minutes from Secretary Paul Pancella, with editing and some other changes made by Mike E.
Michigan HPV Rally
The first item discussed was planning for the 31st annual rally June 13-14 at the Waterford Hills sports car racing track in Clarkston.
Paul Pancella volunteered to run the urban transportation contest again on Saturday afternoon.
There was strong sentiment against running the standing start 1-kilometer timed race and no one present advocated for it.  It was decided to replace it with a fun event that would potentially be easier to run and score (who finished first, second, etc., rather than having to time each competitor). It would be a fairly short race with a Le Mans-style start (riders running across the track and then climbing on or into their vehicles), with possibly some cargo carrying requirement and a mid-course mandatory pit stop.  Further details are to be determined and the finishing order may be incorporated into points for the UTC.  The rest of the event schedule will remain the same as in previous years.
We then discussed  Charles Brown's idea for creating a "sport" sub-class within the Human Powered Race America (HPRA) “stock” class that would favor vehicles which are more “streetable” than the low racers which now dominate the category.
Charles' argument, expressed in a letter to Mike E., is the stock or unfaired class was created to encourage development of practical vehicles for use on the road, but, "This group is now being dominated by the lowracers, which enjoy an aerodynamic advantage over bicycles with a higher seating position." The higher seating position makes such "sport" bikes more visible to motorists, hence are safer.
Accordingly, Charles suggested to qualify for the sport class, riders eyes must be a minimum of 42 inches above the ground.
The consensus was not to formally define and score such a subclass at Waterford this year, but to measure the height of a rider’s eyes above the ground on stock class entries during tech inspection.  Then we can see if there is a logical place to make a cutoff, how the potential qualifiers perform (if there are any) and gauge the level of interest among competitors  and use the information to decide whether to include a "sport" subclass in future years. (Note: After everyone got home, some got their tape measures and climbed on their bikes. Their eye height measurements were: Tour Easy, 49 in.; Lightning P-38, 48 in.; Ryan Vanguard, 53 in.; and a lowracer, 27 in.) Jake Meyers, who graduated from WMU in December, shows the Handi-Bike, a combination wheelchair/bicycle, he helped design as a student in product design engineer. Rather than conventional handrims attached to the wheels for propulsion, the Handi-Bike uses an elliptical drive system, with the user moving levers back and forth, one for each wheel, which also enables him or her to steer. The rear wheel is suspended. It's mounted to a beam, which can be slid inward to make it the Handi-Bike shorter when used inside.  Bottom photo:  Terry Gerweck holds the levers, which slide back and forth to drive the red sprockets, which are linked by chains to the hubs. There's individual drive for each wheel, so the system also can be used to steer, that is, propelling only the left wheel makes the Handi-Bike turn right and vice-versa.  (Paul Pancella photo) 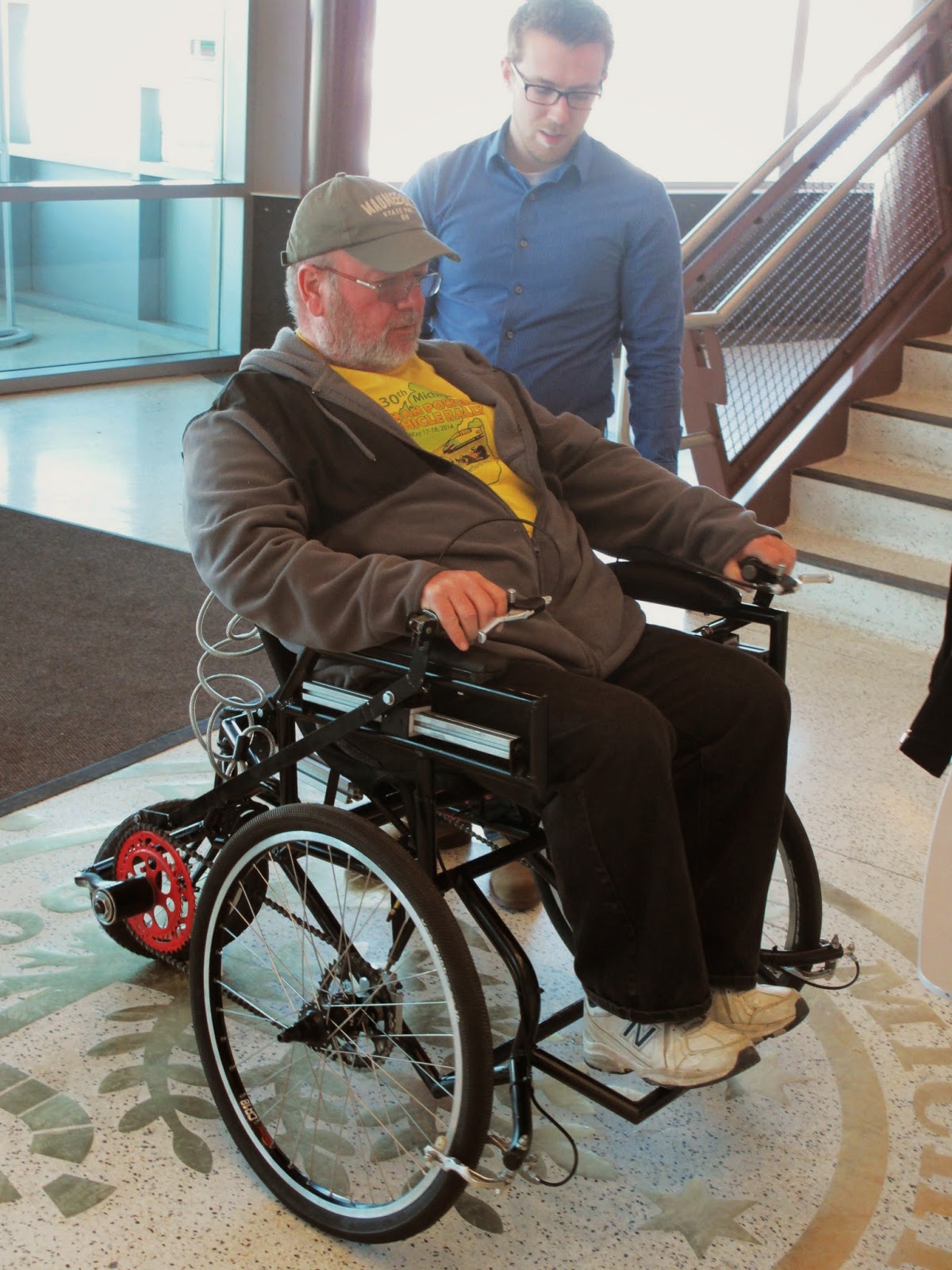 Then we moved to a discussion of the rally’s fee structure and the problem of multi-rider/vehicle teams and riders sometimes "jumping in" just before the start of a race.
Bruce Gordon said the 2014 rally broke even financially, but we should nevertheless consider raising entry fees.  The related issue of “team” entries occupied the bulk of the discussion time.  We resolved the following:
1)  For the normal competitor, every vehicle must be registered and pay the same fee as last year – $30 to compete on one day, $40 to compete on both days.  An individual racer may compete in multiple vehicles when the schedule and class structure allow (at the discretion of the race director), but each vehicle must have a paid registration and its own number, per HPRA requirements.
2) For the past few years, college and other teams were paying $100, regardless of the number of riders and vehicles. The change: For teams, defined as any group in which multiple riders may compete in the same vehicle over the course of the rally, every unique combination of rider and vehicle must register separately in order to participate in any event.  Every such combination will be charged $15 for the weekend and have its own unique number, consisting of the vehicle number (appropriate to the competition class) and a letter suffix.  Registrations must be complete and paid for by Saturday  morning for all participating combinations, to prevent a rider deciding just before the start of a race to participate.  It will be the team’s responsibility to prominently display the correct number on the vehicle for every event.
For example, the same vehicle would display the number 305-A when raced by Joe Smith, then 305-B when raced by Celia Jones, even if it is in the same event (such as the sprints).   Then observers don’t have to record names at the starting grid.  All such numbers must be traceable to a registration sheet that has the proper rider name on it.  At the discretion of the treasurer or race director,  additional team registrations may be accepted on Sunday morning for that day's events.  Since this will be a change from recent practice, we need to publicize this widely ahead of time. 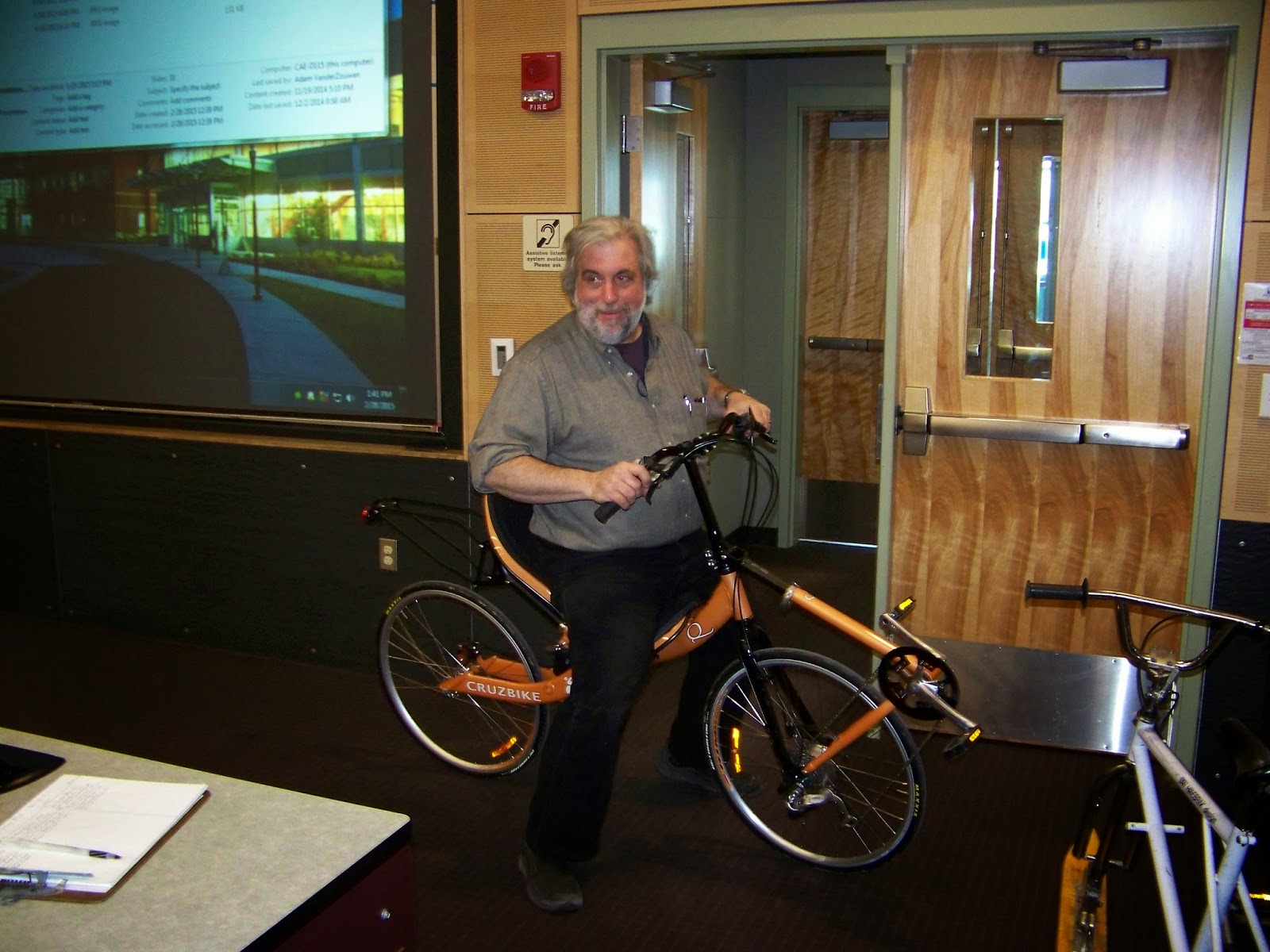 David Middleton of Kalamazoo also brought his Cruzbike Quest, which he bought last year. Wheels are 26 in/559mm and gearing is a SRAM Dual Drive, which combines a 3-speed hub with nine deraileur sprockets. It folds. Dave previously rode a mountain bike converted with a Cruzbike conversion kit into a front-wheel-drive recumbent.

Since Bruce Gordon volunteered to do the work, members agreed to have advance registration available online, along with the option to pay ahead of time via PayPal.  The fees mentioned above apply only if the registration takes place in advance.  Any registration that takes place at Waterford will cost $10 more (regardless of whether it is for one or both days).  Advance payment is not required to avoid this extra $10 fee, only advance registration.  We did not discuss a specific deadline for advance registration; Bruce will have to determine what is reasonable and publicize it appropriately.  I (Paul) think we meant this extra $10 to apply to team entries as well, so that if a team anticipates all of its rider/vehicle combos, they only cost $15 each, but adding another one on Saturday morning would cost $25.  (Note: Although Bruce is no longer MHPVA treasurer, he did agree to being treasurer of the rally.)
Future of the MHPVA
We had extensive discussion about matters relating to leadership, finances, insurance, and the legal status of the Michigan HPVA now and in the future.  Being a chapter of the International Human Powered Vehicle Association, as specified in our articles of incorporation, seems to have lost any relevance it may have had, but we as an association still feel like more than just an event organizer for the HPRA series.
The bylaws and articles of incorporation were written in 1989, before there was e-mail, so one needed update is that they currently require that notification of the annual meeting be mailed to members.
After a bit of communal soul-searching, we determined that there is no immediate crisis, and that we should continue more or less as we are.  Bob Krzewinski volunteered to study needed changes to the bylaws and articles of incorporation to modernize the requirements for communication or other things, and then pass them around to the other officers. Any changes will have to be approved by the board and/or the members. 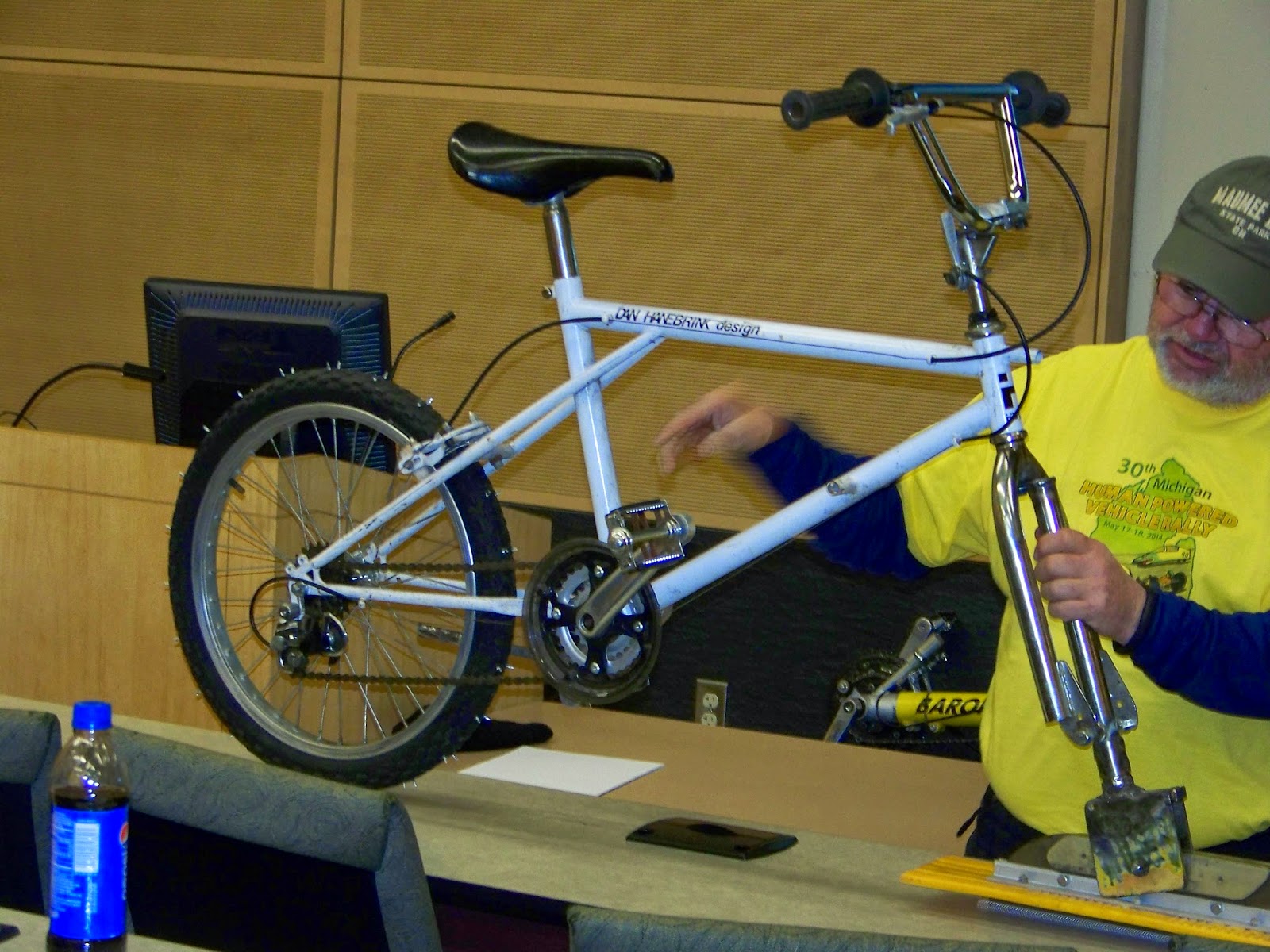 MHPVA co-founder Terry Gerweck of Monroe showed his latest creation, an ice bike using an old Dan Hanebrink Design bike.  Self-taping screws were screwed into the tire to provide traction. Rather than attaching the ice boat blade directly to the fork, Terry attached it to a ski so that the front end will slide over any holes in the ice, rather than "wiping out."

Prior to the meeting, Mike Mowett, who was president since 2008, said he didn't want to be president any more and Bruce Gordon didn't want to continue as treasurer. So elected or re-elected were:
President, Mike Eliasohn, St. Joseph; vice president, Mike Mowett,  St. Clair Shores;secretary, Paul Pancella, Kalamazoo, treasurer, Bill Frey, Grosse Pointe Farms; and members at-large, Wally Kiehler, Grosse Pointe Woods, and Bob Krzewinski, Ypsilanti.
Note from Mike E.: I am a co-founder of the MHPVA and long-time president or vice-president and Bill Frey was treasurer for 12 years before Bruce became treasurer at the 2014 meeting. Both of us are in our 70s and, I think it's correct to say, both of us view our new positions as temporary. 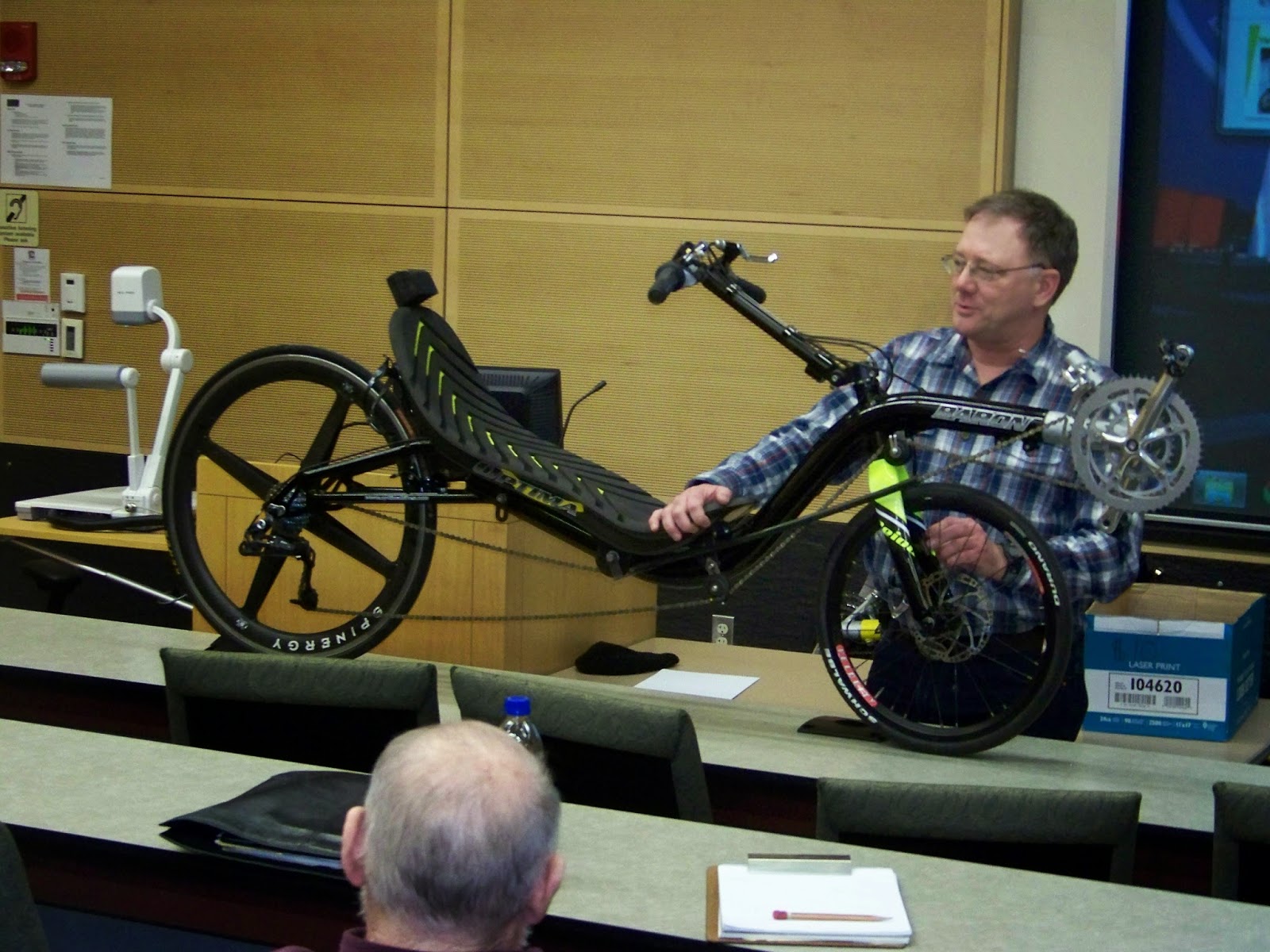 John Foltz of Haslett brought his Baron, to show his latest modifications, a carbon fiber fork and a front disk brake caliper where both brake pads move, rather than one pad moving and the other being in a fixed position. 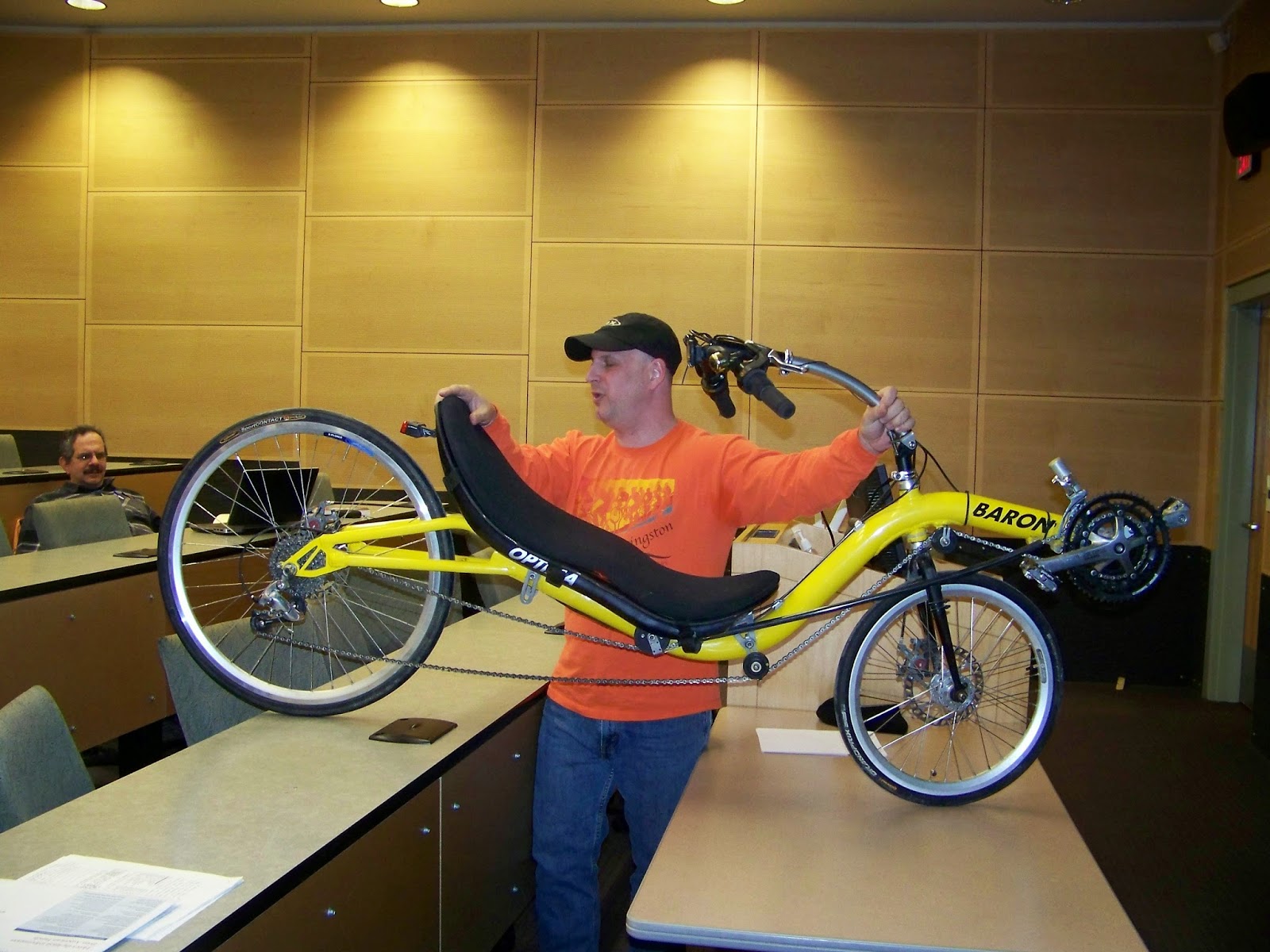 Tim Bazzinett of Brighton was riding his upright road bike when he got passed by someone on a low racer and he decided he had to own one. He bought his used Baron last fall and, "I've been riding it ever since." On a downhill, he reached 46.7 mph. "It was a thrill."