NOTE: MICHIGAN HPV RALLY INFORMATION IS THE NEXT ENTRY DOWN. 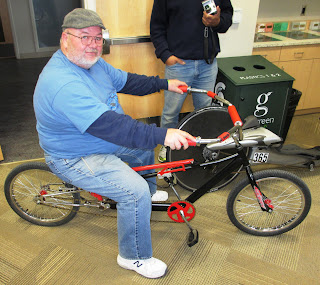 TERRY GERWECK of Monroe shows his recently completed 20-inch wheel stretch cruiser at the MHPVA annual meeting. Terry is a co-founder of the organization.

The recording secretary (me) did not arrive in time for the tour of the MSU Bikes shop, which was given by our host, Tim Potter, starting around 12:30.  I caught up with the group in a small conference room in the MSU Surplus Store and Recycling Center on the south part of campus around 1 p.m..
Tim Potter was finishing his description of what services are available at the  Surplus Store and Recycling Center.  This was followed by everyone present introducing themselves, at the invitation of our president, Mike Mowett.
Dave Johnson of Olivet has made a good recovery from hip replacement surgery.  He filled us in on the continued success of his family business, Too Cool T-shirt Quilts, which has even allowed him to do some traveling for business (bringing bikes along, of course).  Rick Wianecki brought pictures of a cedar-stripped fairing project he helped design, which was very impressive.
At 1:25  Rich Moeller, League of Michigan Bicyclists executive director, arrived.  His main theme was that LMB is slowly having success increasing the clout of the bicycling community with the state government in Lansing.  There has been some progress on legislation to allow a right turn to be signaled with the right arm, to protect cyclists as vulnerable road users similar to the way highway workers are protected, and to proceed through intersections legally when they are controlled by sensors which fail to register the presence of a cycle.  LMB is constantly working with law enforcement organizations to make sure officers on the street are aware of the rights of cyclists.  A new ‘Share the Road’ campaign is about to kick off.
The LMB annual meeting will take place on May 22 in Lansing and will again be combined with Advocacy Day, when members will be able to lobby their own representatives at the capitol.
Rich stayed for about 15 minutes of questions and discussion with the members present, much of which focused on “rumble strips”.  He can always be reached by email at Rich@LMB.org.  Anyone who does not already get the monthly e-mail alerts can request them by contacting Jenny@LMB.org.
BUSINESS MEETING
Treasurer Bill Frey distributed his report of financial activity for the 2012 calendar year.  Once again, his stewardship has kept our association financially sound.  The small negative net change in our general fund can be traced to an advanced payment in support of the transponder system, and our reserve is sufficient to survive more than a year of operations with no income.
Copies of the report on last year’s winter meeting were distributed and approved as the minutes.
RALLY PLANNING
In general discussion of the scheduling for the 29th annual Michigan HPV Rally, May 18-19,  members present expressed preference for a weekend in May rather than June, acknowledging, of course, the constraints  due to other users of the tracky.
A proposal to add a separate event for arm-powered vehicles got a lot of discussion.  There was some uncertainty about whether enough competitors would actually show up for such an event.  The general recommendation was that race directors could be flexible on this point, offering competitors the choice to participate in our regular events and/or stage a separate event around lunch time on Saturday.
We did take a vote on replacing the kilometer time trial of recent years with a 1/8th mile drag race in the afternoon, which was approved.  The proposal was not for pairwise elimination heats for the whole field, but that everyone get a single run for  time, then if time permits, pair  the top four in two elimination rounds at the end.
President Mowett will look into having a steak fry at the lodge on Saturday evening.  Members were also supportive of having the concession facility open during the weekend.
Saturday May 18, 2013 Events (9 a.m. to 4 p.m.)
One-hour time trial  (two runs)
Hill climb / coast down
Urban transportation contest,  if there is sufficient interest
HAND CYCLE  RACE (new event, depending on participation
1/8 MILE DRAG RACE (new event)  on back straightaway going opposite direction
Dinner at lodge or at local restaurant to be determined
Sunday
200-Foot Speed Sprints (start on top the hill)
25-Lap Road Races (use last year’s new course: no passing through the wall as in previous years, no hill, a lap is about .43 mile, so 10.7 mile race, have two races)
Tricycle race (also depending on the number of competitors)

In addition, members expressed appreciation and encouragement for two important volunteer positions, Blog editor Mike Eliasohn and webmaster Bob Krzewinski, hoping both will continue their good work for the Association.
We then heard a brief report about the recent HPRA event in Florida.  Mike Mowett won.  That was followed by discussion on the aging transponder system, but no action was taken.  President Mowett presented an overview of recumbent cycling events in the Great Lakes area, which was distributed with the agenda.  A brief, informal show-and-tell session started at about 3:40, with Terry Gerweck showing his homebuilt stretch cruiser and Mike Mowett showing his John Morciglio-built low racer. 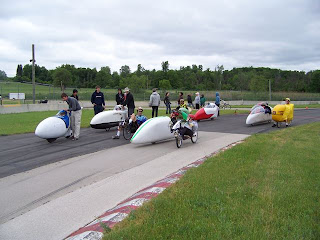 The 29th annual Michigan Human Powered Vehicle Rally will be Saturday and Sunday, May 18-19, 2013, at the Waterford Hills sports car racing track on the Oakland County Sportsmen's Club grounds in Clarkston, near Pontiac.
The oldest such event in North America is open to riders of all human powered vehicles — recumbents, regular bicycles, tandems and handcycles. There are classes for streamlined, unstreamlined cycles, tandems, women, youth and tricycles. The rally is conducted using Human Powered Race America rules (www.recumbents.com/hpra/rulesand.htm). Note: HPRA rules require all vehicles to have a mirror or mirrors enabling rear vision to both sides.
The track is 1.4 miles around, with nine turns and one hill.

ENTRY FEES: One day only, $30; both days, $40 (includes $10 MHPVA membership. $1 of each entry fee goes to support the League of Michigan Bicyclists. Test ride pass, $10, which includes MHPVA membership. Spectators free.
Even if you have no interest in racing, come and see some unusual and some very fast bicycles and tricycles. Prize money will be awarded to top finishers in each class.

Concession stand will be open for lunch both days and possibly Sunday breakfast.
Location: Oakland County Sportsmen's Club: 4770 Waterford Road, Clarkston, MI 48346. For a map of the track, visit http://www.waterfordhills.com/downloads/facilitymap.pdf.

Clarkston - Olde Mill Inn of Clarkston, 5835 Dixie Hwy., 248-623-0300. Across Dixie Highway from Waterford Road leading to track. This is the closest motel to the track.