In March 2008, Mike Eliasohn was gracious enough to allow me to write an article for this blog about my adventures in bike building. (Mike: Actually, as editor of this blog, I asked Dave to write an article and he was gracious enough to write it.)
Recently, during some e-mail exchanges he asked if I would be interested in writing a follow-up of what I have been doing since. Because my ego is as large as I am, 6'5, 300 lbs, - here goes. For your edification and amusement, I am about to chronicle how I got here in just three years. If I were a younger man, you wouldn't be seeing these pictures because of my fear of losing macho points.
After 16 years with the Michigan Department of Corrections, I retired in December 2003, when I turned 62. We moved to Linden, south of Flint, and I built a 16-by-24-foot woodworking shop that had been a lifelong dream. I made walking sticks, chess sets, furniture, stools, pens, toy chests, sideboards, etc., etc. and was having a ball. My wife resumed quilting and I bought a longarm quilting machine and we make more than 20 quilts a year together.
Suddenly I realized that we had all the furniture we needed and I needed something else to make. Why not a wood bicycle? More on that later. I started to spend every night on the Internet. In the meantime, I had begun to ride my Fuji town bike which is now about 30 years old. I hadn't ridden in so long I was afraid to make a pedaled U-turn on my street. 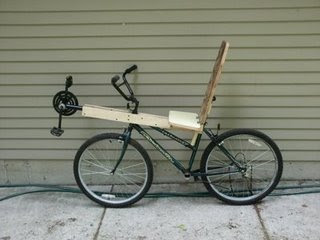 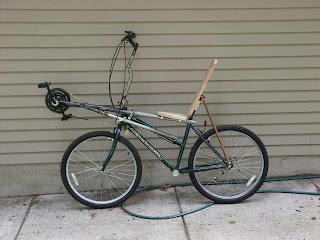 Photos 1 and 2: Bike 1, June 2005. Ya gotta start somewhere. I found a standard size dirt bike and tried a wood extension for the pedals and then went to some pieces of EMT conduit and brazed with TWO Maap gas torches. That takes about 40 minutes per joint! I rode it up the street about a hundred yards and back and cut it up. A young man would have liked it, but this old fat man wasn't gonna ride this one. If you chuckled at this one, you're gonna fall down gasping for air when you see the next two. 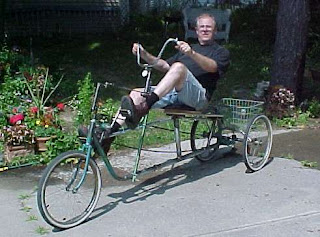 Photo 3: Trike 1, August 2005. Took the rear end off a worn out granny trike (that is, an adult tricycle). Brazed a new sprocket to a collar and hooked this wobble wheel to the rear axle. This thing just oozes with engineering expertise, doesn't it! Still brazing. I didn't know why the chain kept falling off. Even the neighborhood cats were laughing at this one. 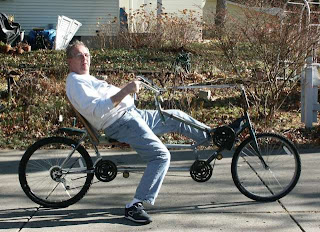 Photo 4 - Long wheelbase bike 1, Nov 2005. Actually, this one is not bad. I was getting there now. I laid it out acurately and took it to a 72-year-old professional welder and we lined it up right. My first remote steering, loose and wobbly, but it worked. Heavy and clumsy, but so was the rider. It worked. I took off the front parts and converted it into an exercise bike that is still being used in my basement.

That pretty well brings me up to the Flowroller mentioned in the previous MHPVA blog article. While still doing online research, I saw my first wood frame bike and was ready to build when I saw the Flowroller by Robert Horn. Bought my own welder, bought the steel. Game on!
In September 2007, I converted the yellow DeltaWolf into a front-wheel-drive trike, bringing my trike count to 3. I couldn't resolve chain issues on the Wolf while trying to incorporate a 7-speed hub "transmission." The concept is OK, including dual rear disc brakes. It's just about as low as they can be too, That was my all-winter project. but I just don't like it. Movin' on. 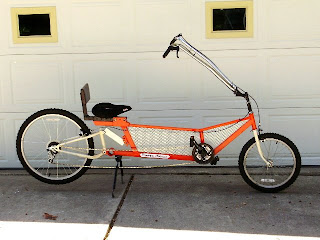 Photo 5: In May 2008, I finished the OrangeAppeal. Single speed at this stage, but I can add shifters if I want. It was inspired by my first ride with the Michigan Freak Bike Militia. Built for fun and as a parade vehicle.

In July 2008, I bought, yah dats right, a Sun EZ-3 USX trike. (Editor: It's a manufactured two-wheels-in-the-rear recumbent tricycle with under-seat steering and a form of suspension with a pivot and shock absorber mid-frame.) Don't care what the pundits say! I love it. It's the comfort trike that gets me around town on errands and gives that exercise I need. July, 38 miles; August and September, over 100 miles; October, 82 miles (wife was in then hospital). November, she was still recovering and the weather went bad, but I still got in 37 miles, including two 10-mile runs. The last run was with the Michigan Freakbike Militia, my second ride with them, but that's another story. What a great group. 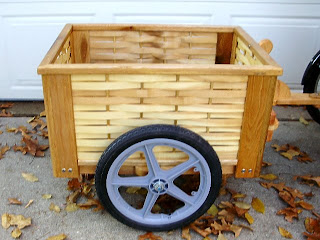 Photo 6: I built the grocery cart for the trike in November out of red oak and ash.

In October, I did a 8.5-mile ride with my son-in-law and his dad. We rode Indian Trails Park, northwest of Detroit. Flat and woodsy, with a 30 mph downhill at the start, which translates to a 5 mph uphill at the end. Son-in-law was on a high end trail bike and his dad was on a LeMond. I tried to keep up and did OK, but ran out of gears on the EZ-3. I may be 67 years old and overweight, but the little boy in me still wants to compete. I know I can't beat them, but I want something that will make them grunt a little. 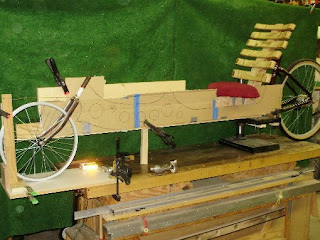 Photo 7: Remember that wood bike reference earlier? Somewhere between all the other builds I tried a couple of wood-framed ideas, but they just didn't work out and never got on the ground. Take a look at the last photo. This is the Dragonwood. Wood frame, long and low, 21 speeds, incorporating the 7-speed hub from the delta trike and the seat from a previous wood bike attempt. More later. Stay tuned, this is a serial.
Posted by mike at 4:14 PM No comments: