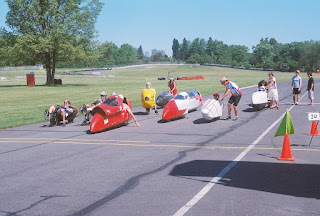 THE START of the 25-lap race for the faster vehicles on Sunday morning was won by Rick Gritters (white vehicle, second from right) at an average speed of 25.62 mph for the 10.8 miles. (Mike Eliasohn photo) 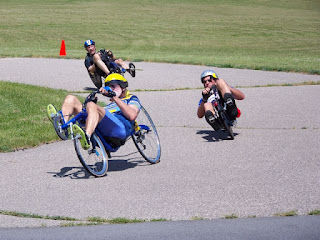 IN THE SECOND road race Sunday morning, for slower vehicles, Bill Lozowski on his M5 lowracer is ahead of Tedd Wheeler on his Gritters lowracer and Brian Stevens on his Morciglio ViperBlue in the rear. (Mike Eliasohn photo)

The 28th annual Michigan Human Powered Vehicle Rally – the 25th at the Waterford Hills sports car racing track in Clarkston – on May 19-20 drew about 40 competitors and vehicles.
That was about 10 more competitors than attended the 2011 rally. It would be interesting to know if the increase was due to the change from the normal June rally dates to May, which we had to do because the track was booked every weekend in June for automotive events. 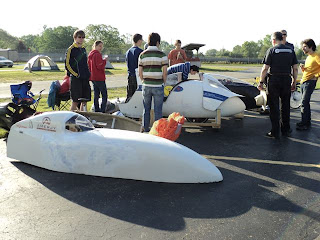 
For the third straight year, turnout was boosted by the team from the University of Toronto, which this year came with four vehicles – three of them streamliners – and 11 team members.
As usual, the stock class drew the most entries, 19, with MHPVA President Mike Mowett of St. Clair Shores, riding a John Morciglio-built M1 lowracer, coming out on top with 330 points. Second was Warren Beauchamp of Elgin, Ill., on a Velokraft NoCom low racer, 275 points; 3) Thom Ollinger, West Milton, Ohio, homebuilt Nirvana lowracer, 252; 4) Brian Stevens, Grand Rapids, Morciglio ViperBlue M2, 248; and 5) Bill Lozowski, Springfield, Ind.; M5 lowracer, 227. 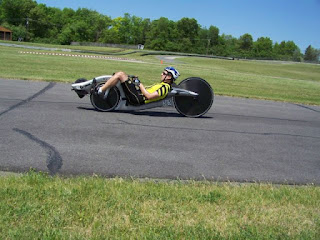 The top three in the rest of the classes were:
Streamliner (6 entries): Rick Gritters, who was absent the last two years, returned from Pella, Iowa, with his homebuilt streamliner with a fairing made of aircraft fabric over a tubing framework and won the class with 355 points. 2) Dave Johnson, Olivet, Rick Wianecki-built Great White, 315; 3) Rich Myers, Xenia, Ohio, Terry Hreno built Mini Moby, 300. 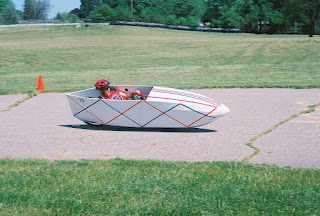 RICK GRITTERS, winner of the streamliner class, ran in the Sunday morning road race without the canopy. He rebuilt his fairing so that it now comes apart in two pieces – the vertical seam is just behind the front edge of the opening – so that both parts and the canopy now fit inside his very compact Honda Fit. He then transports the bare bike plus his stock class entry on a rear rack. Rick's trip from his home in Pella, Iowa, to Clarkston and return totaled about 1,300 miles. (Mike Eliasohn photo)

College: With some University of Toronto students riding more than one vehicle, and with each vehicle being ridden by more than one rider, they were given their own class. Trefor Evans in the Ace streamliner scored the most points, 175, and Cameron Robertson in the Vortex streamliner had 160. But Trefor also scored 115 points in the Vortex and Cameron had 100 in the Ace.
Super street (3 entries): 1) Wally Kiehler, Grosse Point Woods, Lightning F40, 345 points; 2) Tedd Wheeler, Reed City, Alleweder velomobile, 180; 3) Garrie Hill, Granville, Ohio, WOW velomobile, 55. 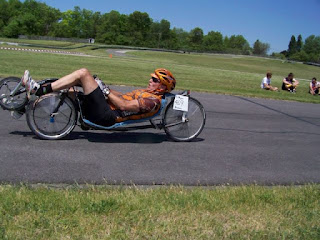 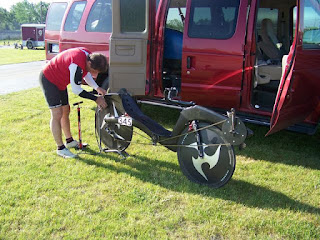 JOHN MORCIGLIO of nearby Waterford inflates the tires on his Arrowhead mid-racer prior to the start of the Sunday morning events. Below, he rides it in the 200-foot sprints to a speed of 32.9 mph – fifth place. John has built numerous carbon fiber pedal-powered vehicles, mostly recumbents, for customers. His website is www.thundervoltman.com. (Mike Eliasohn photos) 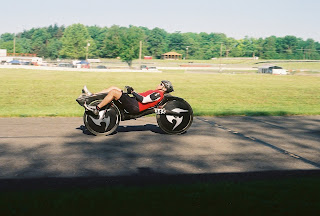 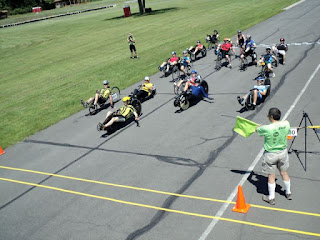 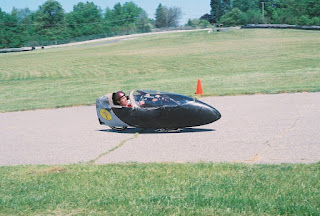 TREFOR EVANS (I think) IN THE UNIVERSITY OF TORONTO Bluenose competes in a Sunday morning road race. The newest U-T streamliner is made of carbon fiber and has dual 20-inch (406mm) wheels and front wheel drive. The goal is to be competitive at the World Human Powered Speed Challenge at Battle Mountain, Nev., in September, but early teething problems include instability, especially at slow speeds (Mike Eliasohn photo).

This year there were five entries in the Urban Transportation Contest on Saturday, most of whom were new participants. Here are the entrants in order of finish:
1) Bill Lozowski, Springfield, Ind., 68.0 points, entered his wife’s folding upright bike, a Dahon Mu-24 model, which uses 24-inch wheels.
2) Longtime racer Dave Johnson of Olivet, 67.0 points, entered his 1985 Specialized StumpJumper mountain bike, well equipped for commuting. His lighting systems were especially impressive
3) Tim Potter of Lansing, 65.1 points, brought the 1983 Nishiki upright that he uses for daily commuting.
4) UTC veteran Wally Kiehler, 64.1 points, again campaigned with his Lightning P-38. Wally’s was the only recumbent bike entered in the UTC this year.
5) Brian Beard, Franklin, 62.7 points, entered one of his unusual StrideCore bicycles, a vehicle with no seat and no traditional pedaling mechanism. These bikes are propelled by stepping up and down on platforms, in a motion similar to climbing stairs. They have just been brought to market by a Michigan company, StrideSports. Unfortunately, Brian did not bring any of his lights or carrying accessories, and so was unable to score points in some areas.
Points were awarded in the following categories: Aerodynamics (measured by results in the coast-down that was part of the regular rally competition); weight; rider vision; daytime and night time visibility; vehicle size (smaller is better); maneuverability (turning radius); grocery run; braking; weather protection; rider comfort; tools/lock/spares; uphill hauling (low gear); and
passenger bonus. The simulated grocery run tests several relevant aspects of an urban transportation vehicle, which is why its score carries a relatively large weight.
As you can see, there was not much spread in the scores this year, with some similar bikes in a fairly small field. Despite a very poor coast-down distance, the Dahon folding bike took the $20 first prize by edging out Dave Johnson with a faster grocery run.
Thanks to all the folks who entered, and to Jun Nogami who helped with the setup and running of the event. 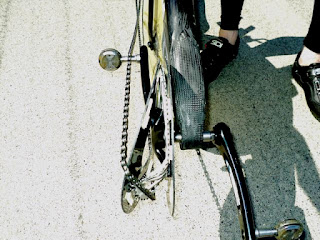 SEAN COSTIN PUSHED SO HARD IN THE HILLCLIMB that he twisted the chainring on his Velokraft NoCom, so lost points in that event and the coast-down. He borrowed Mike Mowett's Morciglio lowracer for the kilometer sprint, and riding it for the first time, went nearly the same speed as Mike. Sean got the chainwheel straightened in time to resume competition Sunday on his NoCom. (Terry Gerweck photo
Posted by mike at 11:33 PM No comments: