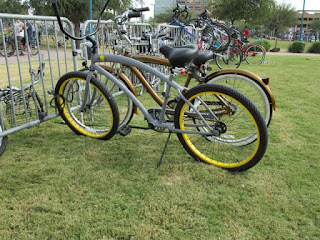 I had already purchased my airline tickets to (and from) Phoenix, Ariz., when I discovered that the Tour de Fat was taking place in Tempe, Ariz., on Saturday, Oct. 6, my day of arrival. The site, a park on the edge of downtown Tempe, was only a couple of miles off my usual route from the airport to my hotel and then my ultimate destination in Mesa, to see family, so how could I not go?
In 2012, there were 15 Tour de Fat events around the country, sponsored by employee-owned New Belgium Brewing (www.newbelgium.com) in Fort Collins, Colo., as part of its marketing efforts. The first was June 2 and the last will be/was Oct. 20. The only TdFs in the Midwest are in Chicago, Milwaukee and Minneapolis.

The "Fat" in Tour de Fat refers to fat-tired cruisers – one is pictured in New Belgium's logo – but presumably any type of bike is welcome. Though other than various types of cruisers, the only bikes I noticed were some skinny-tired "fixies" (fixed gear single speed road bikes). 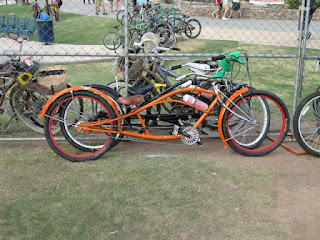 The day's events in Tempe started with a morning parade – with wearing of costumes by riders encouraged – followed by music and other entertainment, bicycle contests and, of course, New Belgium beer, in the park.
In a preview article in the local College Times newspaper, Matt Kowal of New Belgium said, "We are a bike festival  first and beer festival second. We really want to make sure that people have the chance to taste our beers, but also come in lucid and be able to get inspired about bikes."
But I did observe a young lady, who may have had a few too many brews, pushing off on her bike with difficulty, to put it politely. A man sitting on a stretch cruiser also saw her and joked she was guilty of BUI (bicycling under the influence.) 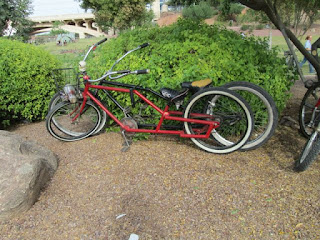 It should be noted that Tempe is a college town (Arizona State University), and with temperatures ranging from warm to hot and flat terrain in the Phoenix area, is ideal for cruisers, which typically have only one or three speeds.
Unfortunately, by the time I got to the TdF in mid-afternoon, it was winding down. There were still plenty of bikes, but as I approached in my rental car, cyclists were leaving in droves, so I saw plenty of interesting bikes before I got there.
And by the time I got there, time was getting tight and I didn't want to be too late to my final destination. I found an empty parking space on the street, paid for 20 minutes of time on the meter, and made a quick tour. I took as many photos as I could, but didn't have time to talk to anyone, sit on any bikes or go on any test rides. 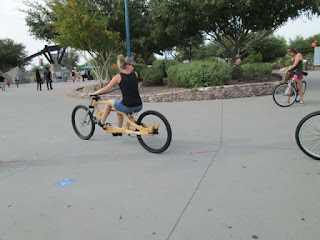 This rider is on a Driftwood Cruiser, with, as the name suggests, a wood frame. Driftwood Cruisers are made in nearby Mesa, Ariz., by Preston Brown and his helpers. If you want to buy one, and even if you don't, but want to see more, go to www.driftwoodcruisers.com. 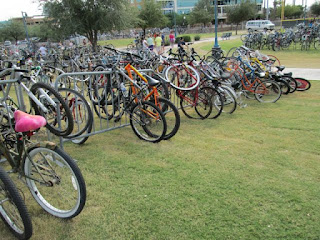 How many bikes were at the Tour de Fat in Tempe? A safe guess is more than a thousand, and maybe thousands.

According to the College Times article, the TdF event in Temple is the second largest, behind only the one in New Belgium's home base in Fort Collins, Colo.
"We're just there to share in the celebration of the greatest invention of all time," Kowal said in the article. "It's not just a festival about beer and bicycles, but about people-powered transportation and people-powered fun." 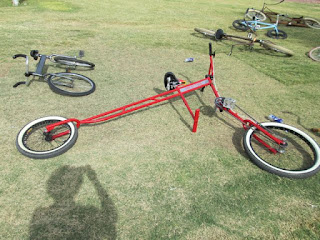 Many low-racers seen at Human Powered Race - America events have front-wheel drive and front-wheel steering.  This bike also has FWD and FWS, but it's obviously not for racing. Presumably the pegs hanging below the seat are for the riders' feet, so he can coast. (Fixed gear, maybe?)  (Update: I later learned this bike, the swing bike below and some other interesting two-wheelers are made by Jon's Big Bikes in Peoria, Ariz., www.jonsbigbikes.com.) 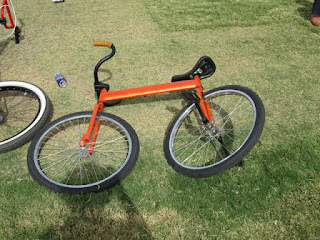 This is what's known as a swing bike; both the front and rear wheels steer. The axle for the cranks runs through the rear wheel. Very nicely built, be it homemade or by a professional. 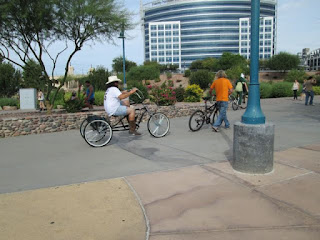 Tricycles were also seen at the Tour de Fat, but not of the recumbent variety. 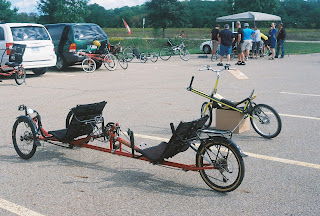 THE MICHIGAN RECUMBENT RALLY - WEST, organized by Paul Pancella, took place Sept. 8 in the parking lot of the College of Engineering building on the Western Michigan University Parkview Campus in Kalamazoo. That's a WizWheelz (now TerraTrike) tandem in the foreground, which was for sale. There's been a recumbent rally in west Michigan every year since 1997, always on the day before the Vineyard Classic Bicycle Tour in the Paw Paw area. Photos and captions by Mike Eliasohn 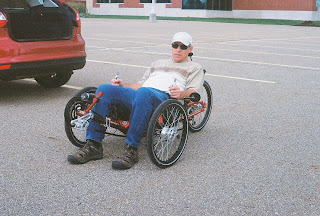 JOHN MISHLER of Richland brought his ICE Sprint FS, which he bought in September 2011 from SPIN bicycle shop in Lansing. Custom-ordered from the factory in England, the rear wheel folds forward and the seat is easily removable, resulting in a compact package that fits in the rear of John's Ford Focus hatchback. There's suspension on all three wheels. According to the SPIN blog, it also sells Catrike recumbent tricycles and Rans recumbents and crank-forwards, as well as upright bikes. It's at 206 E. Grand River Ave.; phone 517-372-3000. 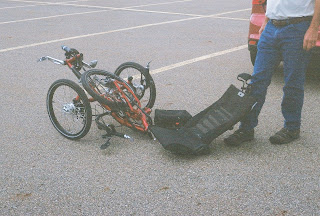 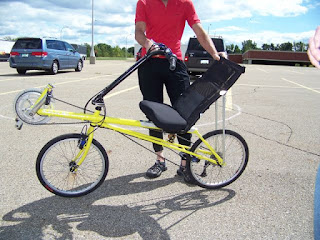 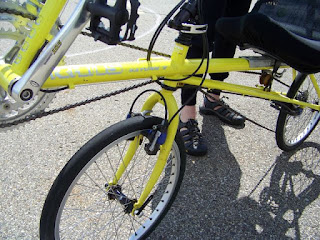 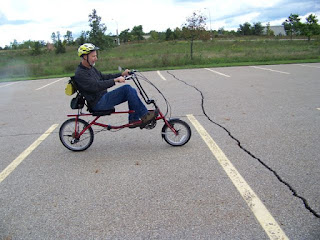 DAN WILSON of Bridgman tries Mike Eliasohn's Sun EZ Classic compact long wheelbase recumbent. This is the current version of what was the EZ-1. John Mathieson of Breakaway Bicycles and Fitness in Portage came to the rally with two recumbents and the news that in addition to Bacchetta and Sun, it will be selling TerraTrike recumbent tricycles. Breakaway, which also sells upright bikes, also has shops in Muskegon and Grand Haven (www.breakawaybicycles.com). The Portage store is at 185 Romence Road, phone 269-324-5555. 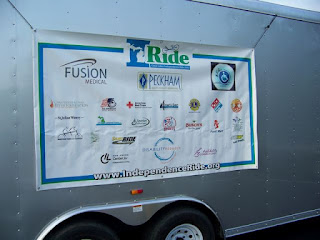 The sixth annual Great Lakes Independence Ride, otherwise known as IRIDE (www.independenceride.org), started Aug. 2 in St. Joseph and ended four days and 240 miles later in Ann Arbor.
The ride is a project of the Center for Independent Living in Ann Arbor,  "a nonprofit organization dedicated to the success of children, youth and adults with disabilities at home, at school, at work and in the community," to quote from its website (www.annarborcil.org).

Glen Ashlock, the center's director of sports and recreation and a ride participant, said 52 riders pedaled  the entire distance, while another 10 to 12 rode at least one day. About eight riders were on hand cycles and two or three with visual impairments rode on the back of tandems.  The longest single day stretch was 63 miles.
The ride also was a fund raiser for the Disability Network/Michigan and the Centers for Independent Living in the state. 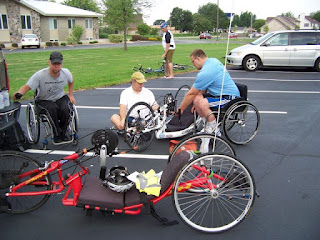 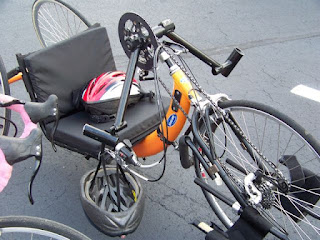 A closeup of the Invacare Top End Excelerator XLT Pro ridden by Tom Hoatlin of South Lyon. It has 27 speeds. Notice the upside down deraileurs for the triple chainrings and 9-speed cassette and two brakes on the front wheel. 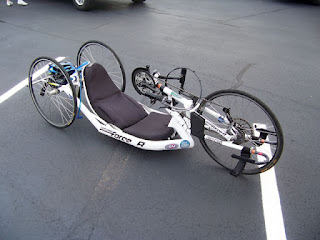 This Invacare Force R, ridden by Bryan Wilkinson, also has 27 speeds, and a disk brake on the front wheel. No rear brakes. 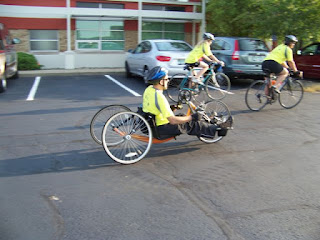 Departing from the offices of the Area Agency on Aging and Disability Network/Southwest Michigan, these two handcycle riders show very different riding positions.  Above is Tom Hoatlin and below is Brad Baumann. Glen Ashlock said the riding position is determined partially by rider preference and partially by disability. For instance, the upright position enables the rider to use his or her trunk muscles more. 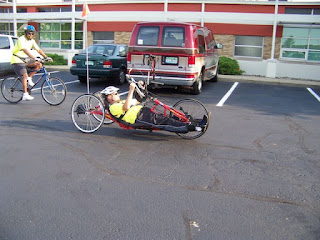