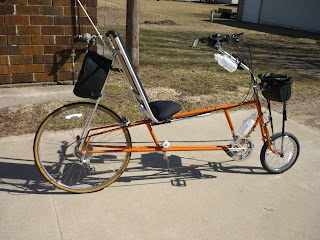 JERRY MEYAARD'S first EZ Clone, which is his personal bike. He also made the seat.

When Jerry Meyaard showed up at work riding his homebuilt recumbent bicycle, two of his co-workers wanted one.
So he recently completed building bike No. 3, with plans for No. 4.
The Zeeland resident said he first got interested in recumbents about 11 to 12 years ago when a neighbor won a Linear in a raffle. (Linears were/are manufactured aluminum frame long wheelbase recumbents, most with under-seat steering.) Meyaard bought the bike from the neighbor, but, “I just wasn't comfortable.”
After that, he said, he thought about building a recumbent with above-seat steering and looked for plans. In the summer of 2008 he finally found what he wanted on the Internet, www.recycledrecumbent.com, which has two designs similar to the manufactured Tour Easy. The plans are free.
The first three bikes are EZ Clones, which are made (mostly) from two cut-up steel frame road bikes. Jerry said plans to make No. 4 using the more complex Mach 2 design, which uses one cut-up frame.
The EZ Clone design gives a choice of using a 16- or 20-inch front wheel. Meyaard has used 16-inchers. The Mach 2 requires a 20-inch front wheel. Both designs use a 26-inch or 27-inch/700c back wheel.
His next recumbent may have a disk brake in the rear. “I do think it could use a better brake (than a caliper),” he said.
Jerry's first EZ Clone was welded by his nephew, Keith Brown, builder of the Bike-N-Bar (see story below) and son of Kelvin Brown, who now owns the previously mentioned Linear. Jerry's brother-in-law, Ken Breuker, has welded the bikes built since then.
Meyaard, 60, said he weighs 270 pounds, so his Clone obviously is strong.
When he pedaled his creation to his job at Zeeland Wood Turning Works Inc., two co-workers wanted copies. So bike No. 2 and 3 went to the co-workers. Jerry said after he builds bike No. 4, he plans to sell his first bike. 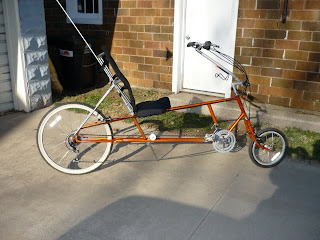 THE SECOND EZ-CLONE, built for a co-worker, who bought a seat used on Sun EZ recumbents. The seats can be purchased without having to buy a whole bike.

He said he used a grinder at work to grind some metal pieces to fit. Last Christmas, he got a Sawzall reciprocating electric saw and a hand held grinder, both handy for recumbent building.
Incidentally, don't look for Meyaard to eventually try building a wood recumbent. “When I get home, I don't want anything to do with sawdust,” he said.
In addition to riding his creation 1 mile to work, Jerry said he also likes to go on early Sunday morning rides.
One attraction of building recumbents: “People ask you if you made that,” he said. “It gives you a good feeling.” 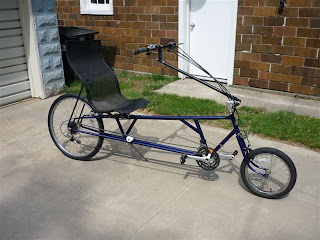 THE THIRD EZ-CLONE, also built for a co-worker, and with a different homemade seat.
Posted by mike at 10:13 AM No comments: