The annual winter meeting of the MHPVA and Wolver-Bents was held March 1 at Washtenaw County Community College near Ann Arbor and Ypsilanti. About 20 members and guests were in attendance.
At 12:40, Bob Krzewinski of the Wolver-Bents gave his “Buying your first recumbent” talk to some interested neophytes.
“Show and tell” began at 1 p.m. Bob K. opened by showing his (partially) new Lightning F-40. Insurance paid for the new frameset and body sock after Bob was struck by a motorist a couple of years ago, while riding his old F-40.
Dave Moeller showed a front-wheel drive tricycle he built. (See separate article below.)
Perennial speedster Chris Evans showed two vehicles, his new VeloKraft NoCom carbon fiber low-racer, then his Catrike Speed tricycle with homemade fairing. The fairing was made with pink foam insulating panels, and is not extremely aerodynamic. The purpose of the fairing is mainly weather protection, allowing Chris to ride more outdoor training miles. 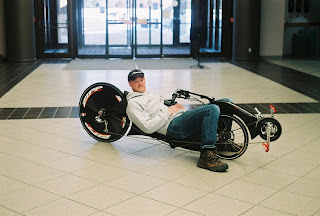 CHRIS EVANS OF FLINT ON HIS VeloKraft NoCom. (Photos were taken in the foyer of the Washtenaw County Community College building following the meeting.) 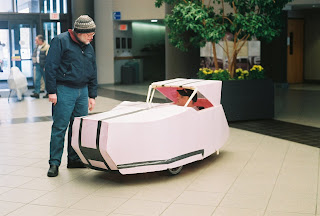 CHRIS EVANS TALKS TO BILL FREY AFTER THE MEETING. CHRIS MADE THE FAIRING IN THREE EVENINGS FROM FOAM INSULATING PANELS MOUNTED TO A FRAMEWORK OF PVC TUBING, WHICH IN TURN IS MOUNTED TO THE FRAME OF THE Catrike Speed. THE WINDSHIELD CAN BE FOLDED DOWN FOR MORE VENTILATION. IT MAY LOOK CRUDE, BUT IT ENABLES CHRIS TO KEEP RIDING IN COLD WEATHER. HE SAID IF THE TEMPERATURE IS MORE THAN 25 DEGREES, HE GETS TOO WARM. "ANYTHING MORE THAN THAT AND YOU'RE JUST COOKING."

John Foltz showed his Optima Baron and Mike Mowett his Norus Streamliner, which he bought from Rob Wood of Ohio, who acquired it from the designer and builder, Gilles Poirier of Canada. (Ask Mike about the “butt bubbles.”) 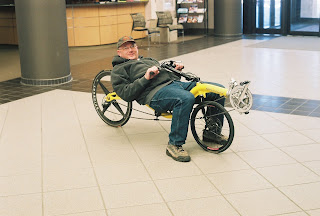 JOHN FOLTZ OF HASLETT ON HIS BARON LOW-RACER.

Bob K. made some Wolver-Bents announcements before the MHPVA business meeting started at 1:55.
Treasurer Bill Frey presented his report covering 2007. It showed expenses of $1,226 and income of $1,412, for a net gain of $186. We maintain about $1,700 cash in reserve, so even with the added $50 expense to rent the WCCC meeting room, we are in sound financial shape. The treasurer's report was accepted unanimously.
Rick Wianecki, our Human Powered Racing - America representative, attended the recent HPR-A race directors meeting, but could not attend today’s meeting. He forwarded the minutes to the MHPVA officers. Not much startling news to report. A separate tricycle class is now available for scoring if enough vehicles show at a given event. The lap timing system is aging, and it may be necessary to purchase some new transponders this year. There was some discussion (and a little confusion) about who will pay, and when it might become more economical to replace the whole system. 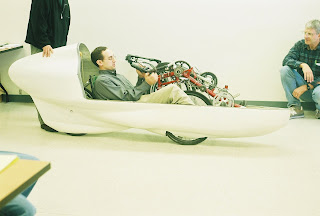 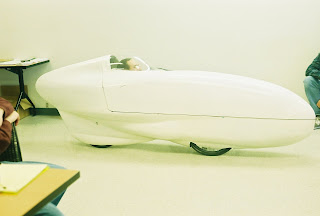 MIKE MOWETT AND HIS NORUS STREAMLINER, WHICH HE HAS YET TO RACE. HE BOUGHT IT IN APRIL 2007 FROM ROB WOOD OF OHIO, WHO PEDALED IT TO 58 MPH AT BATTLE MOUNTAIN, NEV., AND 39 MILES IN A ONE-HOUR TIME TRIAL IN OHIO. WOOD BOUGHT IT FROM GILLES POIRIER OF CANADA, WHO BUILT IT IN ABOUT 1999. THE NORUS HAS 451mm (large size 20-inch) WHEELS WITH PANTOUR SUSPENSION HUBS AND FRONT-WHEEL-DRIVE. IT HAS RETRACTABLE LANDING GEAR FOR STARTING/STOPPING.

Paul Bruneau gave a brief report on our new blog, http://mhpva.blogspot.com/. Although items are open to comments, primary postings should still go through our newsletter editor, Mike Eliasohn. This arrangement will allow us to post news in a more timely fashion, so be sure to check it out, if you haven’t already.
This year’s Michigan HPV Rally will be our 25th, and will take place June 21-22 at the Waterford Hills raceway. Much of the weekend will be the same as we are used to, with the usual lineup of events, free camping available on site, and cash awards on about the same prize budget. The entry fee will be $30 per vehicle to compete one day or $40 for both days, which will include an MHPVA membership.
We will sell commemorative T-shirts and have a special cookout on Saturday evening. The MHPVA will provide ice and charcoal, and maybe some other stuff. Anyone who wants to join in can bring whatever they want to cook and/or share with others.
A motion to add a “UCI-legal” class for regular upright bicycles to the Waterford competition was raised but failed on the vote. A motion to donate $100 for HPRa timing system upgrades passed.
The final item of business was elections. The following members were nominated and elected to serve as officers:
President: Mike Mowett, St. Clair Shores
Vice-President: Mike Eliasohn, St. Joseph
Secretary: Paul Pancella, Kalamazoo
Treasurer: Bill Frey, Grosse Pointe Farms
The members expressed their great appreciation for Wally Kiehler’s many years of outstanding service as our president. Four nominations were made for two directors-at-large: Paul Bruneau, Terry Gerweck, Wally Kiehler, and Don Smith. Gerweck and Kiehler declined the nominations, so Bruneau of Portage and Smith of Sterling Heights were elected.
The meeting adjourned at about 3:30 pm.
Posted by mike at 10:11 PM 1 comment: