The annual human powered vehicle races at the velodromes in Northbrook, Ill., and Kenosha, Wis., on July 19 and 20 respectively drew the usual good turnout and lots of streamliners.
For the results, go to www.recumbents.com, then click on "forums," then "HPV racing." Results are listed separately for the two days. 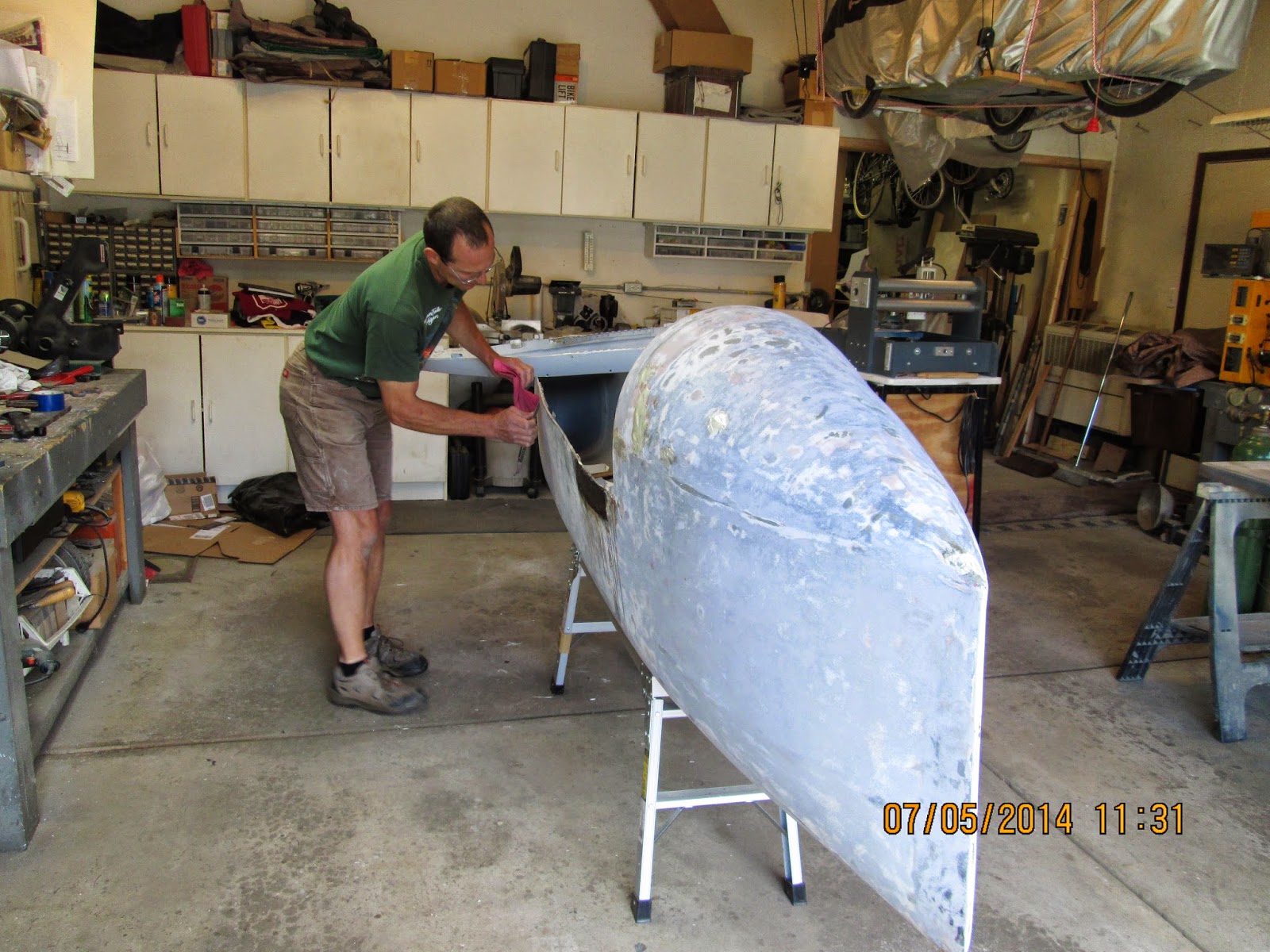 On July 5, Dave Johnson was in Rick Wianecki's garage in Okemos, doing some patching with resin to Great White's fairing before a new paint job. On July 19 at Northbrook, Dave was racing the streamliner, which had been toothless in recent years, with its new paint job, which he did.  Dave, from Olivet, owns Great White, built by Rick in the late 1990s. At Northbrook, Dave finished second overall in the 200m flying start at 36.76 mph. In the 100-lap race, he finished sixth, 18 laps behind, at an average speed of 29.1 mph. At Kenosha, he was third overall in the standing start kilometer and in the 70-lap race, he finished fourth overall, 12 laps behind, at 27.71 mph. 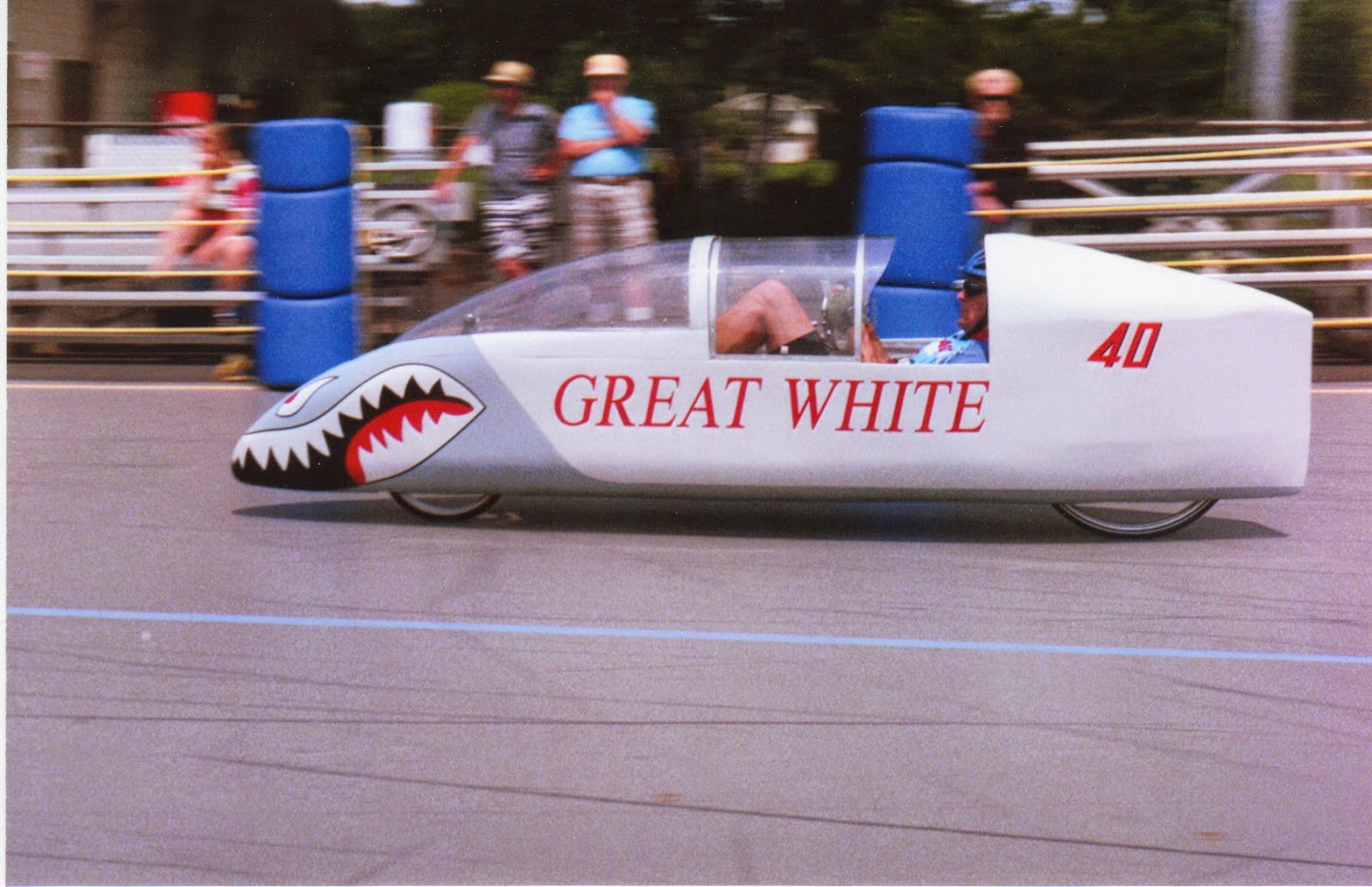 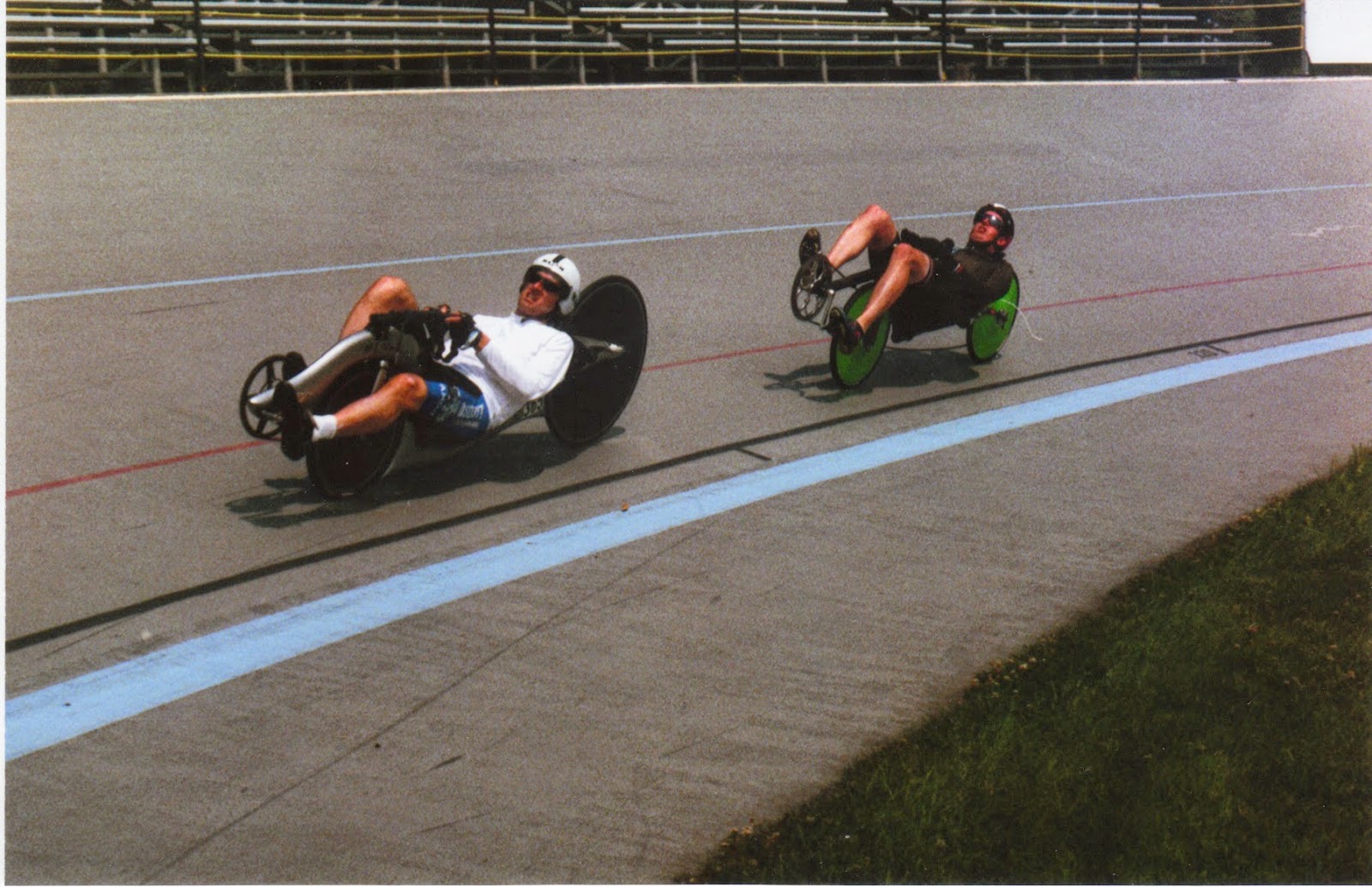 MHPVA President Mike Mowett of St. Clair Shores on his Morciglio M1 leads Dennis Grelk of Donnellson, Iowa, at Northbrook. Mike won the 50-lap race for unfaired vehicles at an average speed of 27.94 mph, with Dennis second. Mike also was fastest of stock class vehicles in the 200 meter flying start at 36.57 mph. At Kenosha, Mike was first in the standing start kilometer at 31.14 mph and also won the 30-lap race for unfaired vehicles. Speed was unavailable. 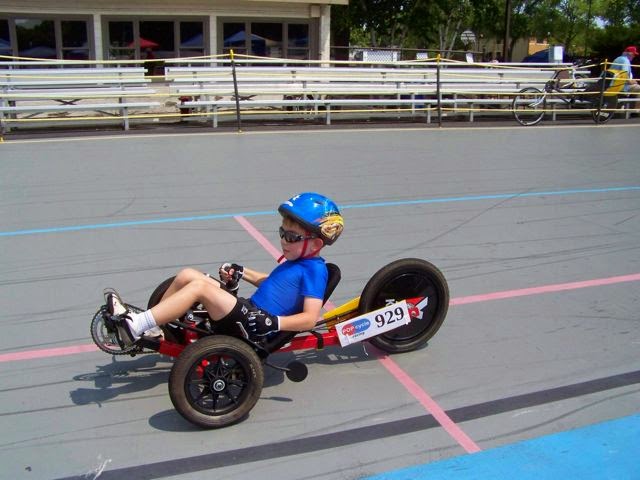 Clifford Lofgren, age approximately 5-3/4, of Buchanan, raced his KMX trike at Northbrook. In the 200-meter flying start, he averaged 15.22 mph and he completed 11 of the 25 laps in the junior/multi-rider race, at and average speed of 8.74 mph. 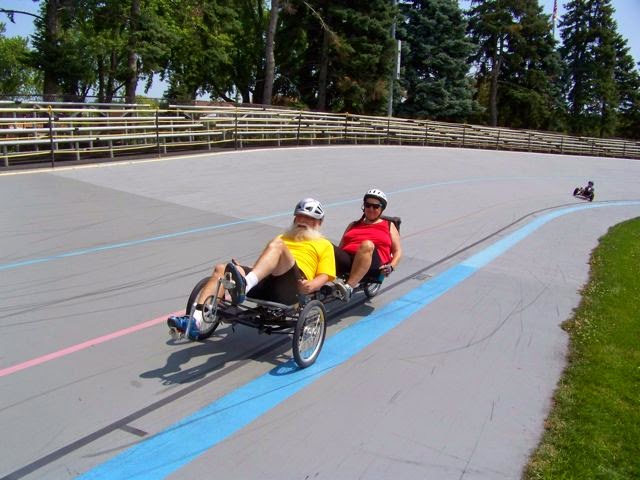 Also in the junior/multi-rider race at Northbrook were Clifford's grandparents, Bruce and Linda Gordon of Buchanan on their Organic Engines Troika. Clifford can be seen in the distance behind them – or maybe he was almost a lap ahead of them, since he finished ahead of them in the race. In the 200-meter flying start, Bruce and Linda averaged 21.98 mph.

At the Michigan HPV Rally May 17-18, Genevieve Kowalik, 9, of Deerfield, Ill., raced an upright bike But at the Northbrook-Kenosha weekend, she was racing her new low-racer that her father, Fran, had Rick Gritters build for her. The seat can be moved back as she grows. At Kenosha, shown here, she averaged 20.27 mph in the standing start kilometer. In the 10-lap race for juniors, she finished second at 19.75 mph. Rick, from Pella, Iowa, has built several low-racers for HPRA competitors and also races his own creations. 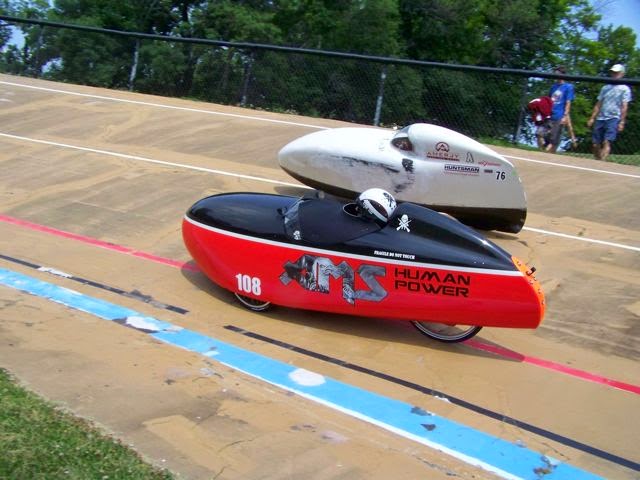 In the 70-lap race at Kenosha, Arne Toman in his Blue Velo Quest duels with Marc Jutras in the University of Toronto Ace. Arne, from West Chicago, Ill., has pedaled the carbon fiber Quest as much as 225 miles in a day, to Indianapolis, and to Green Bay, Wis., which took him 12-1/2 hours. He finished fifth in this race, completing 56 laps at an average speed of 26.79 mph. Arne's Quest, which has lights front, rear and underneath, had the only streetliner, so was competing against streamliners intended only for racing. In the standing start kilometer, he was 10th overall, at an average speed of 26.5 mph. Marc finished third in the 70-lap race, completing 64 laps at an average speed of 30.67 mph.
Posted by mike at 10:11 PM No comments: