Note: Results from the 27th annual Michigan Human Powered Vehicle Rally, held June 11-12, 2011, are available on the MHPVA website, www.mhpva.org. A written report on the rally will appear soon. Meanwhile, here's some interesting cycles seen at the rally, which were not raced. 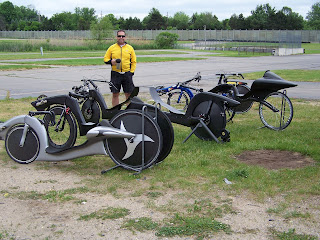 JOHN MORCIGLIO of nearby Waterford came on Sunday morning with five of his carbon fiber creations, and also competed in the second road race (10 laps of the 0.624 mile circuit), finishing fourth in the stock class on the silver bike in front. He built his first carbon fiber recumbent in February 2008 and now builds them for a living. He can be contacted at 248-499-9915 or go to www.thundervoltman.com. 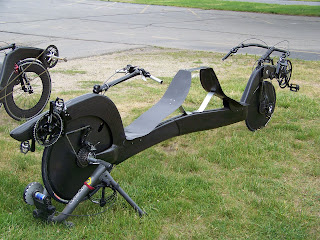 JOHN built this tandem for a customer in Texas. If it's not obvious, the rear of the bike is at left. The "passenger" will face the rear when pedaling. 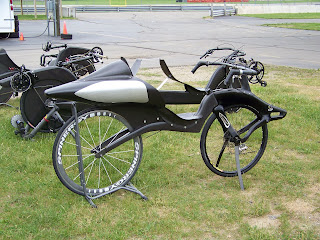 THIS MORCIGLIO CREATION has front-wheel-drive and front-wheel-steering. Look close and you can see where the head tube is. 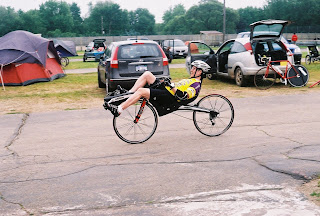 DAVE SHAW, 66, of Clarkston, bought this John Morciglio-built Apache in October 2010. It's the first recumbent he has owned, and bought it, he said, after getting saddle sores while riding his upright bike. But he hasn't given up on "wedgee" bikes completely. "I still alternate." He and the Apache were at the rally Saturday, but did not compete. 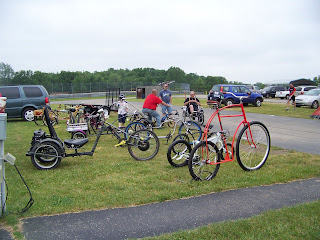 JIM AND DORA JOHNSON, otherwise known as "Chainsaw" and "Giggles," the royal couple of the Great Lakes chapter of the Freakbike Militia brought some of their own creations to the rally on Saturday, as well as encouraging other freak bikers to bring their own bikes. Among those bringing freak bikes/trikes were MHPVA members Terry Gerweck and Dave Moeller. 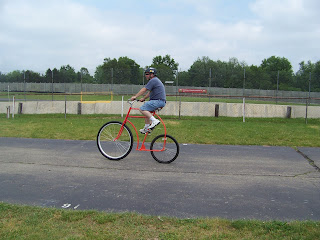 TOM ADAMS of Canton built "High Horse," which emulates the style of high wheelers from the late 1800s. The front tire is a Coker 36-inch; the rear is a standard 26-inch. Tom made the frame from two cut-up bicycle frames and some new tubing. He also made the front fork. The seat is about 50 inches above the ground. (Coker Tire, best known for making tires for antique and collectible cars, also makes a cruiser, unicycle and high-wheeler that use its 36-inch tires. www.cokertire.com) 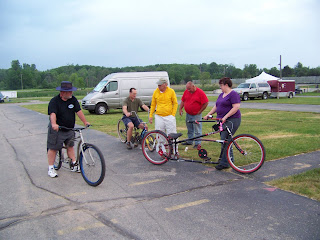 ON SATURDAY EVENING, after the day's competition events and dinner were over, there was an opportunity for HPVers and freak bikers to compare bikes. From left are Terry Gerweck, rally competitors Dave Johnson (on one of Jim Johnson's bikes) and Rich Myers, and Jim and Dora Johnson. Dora is holding "Split Personality," which she built. The side of the bike away from the camera is red. Terry, from Monroe and co-founder of the MHPVA, is on his latest freakbike creation, not quite completed.
Posted by mike at 11:29 PM No comments: