High and low at the HPV Rally 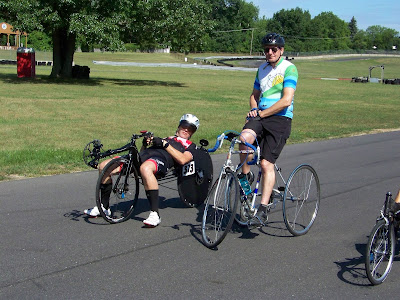 Robert Lloyd of Whitmore Lake on his homebuilt mid-racer and David Hull of Pepper Pike, Ohio, on his Holdsworth tricycle, prior to the start of Sunday morning's 9-mile road race.

There's always some especially interesting vehicles at the Michigan Human Powered Vehicle Rally. Here's a look at two of them at the 2019 rally, Rob Lloyd's homebuilt mid-racer and David Hull's upright Holdsworth tricycle. 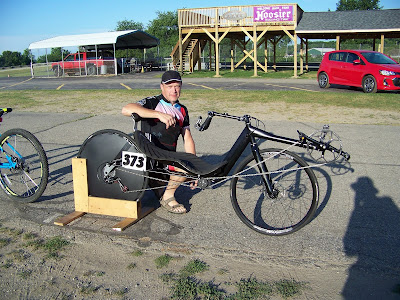 Here's Rob Lloyd with his homebuilt mid-racer on Sunday morning.  The frame may look like carbon fiber, but it's steel, painted flat black.

Rob first appeared at the Michigan HPV Rally in 2017 with his then-new homebuilt long wheelbase bike, which he later modified with a larger front wheel.  (See blog entries July 16, 2017, and Aug. 15, 2018.)
He first raced his new short wheelbase creation at the Northbrook/Kenosha weekend July 27-28, but had problems with the chain jumping off the idler wheel. But he had that problem resolved in time for the Michigan rally.
Rob said on a 12-mile loop in a state park that he often rides, he averages 2 mph faster on his new bike than he did on his old homebuilt and on a Rans he also rode.
The mid-racer weighs about 30 pounds; wheels are 700c rear/650c front.
Rob maintained a build diary with lots of in-progress photos on www.bentrideronline.com. Go to "specialty discussions," then "homebuilders" and finally "midracer."
What's next, he said, is building a similar bike for son Cameron, 12, who finished second in the junior class on his modified Rans Endure. And if Rob gets that done in time, "I do want to put  on some bodywork for next year."  (As of early September, Rob started a build diary for his son's bike on bentrider.com, under the heading, "mid racer -- for a shorter rider.") 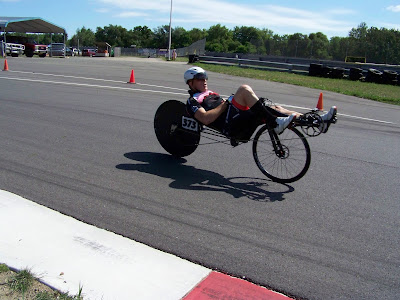 In the 35 years of the Michigan HPV Rally, two other upright English tricycles have made an appearance, but neither was raced. David Hull was the first to compete.
David is from the U.K., but has lived in the U.S. for about 30 years. He said he put the trike together about three years ago.
He later told me (Mike) in an email that he has a photo of his grandfather riding a trike in the 1950s, so "wanted to try one for myself. I quickly realized they are hard to come by over here, but found a guy in the U.K. who was willing to ship me the axle."
He then found the 1972 Holdsworth two-wheeler at Ohio City Bicycle Co-op in Cleveland, where he volunteers.  David did all the work himself to mate the axle with the frame, including building the rear wheels.
(Holdsworth started in 1922, selling cycling clothing by mail order, and began making bicycles apparently in 1933. It made conversion axles from 1935-75. Holdsworth bicycles are still being made – holdsworth-bikes.co.uk – but no tricycles.)
He mentioned that in the old days in the U.K., before indoor trainers and rollers were common, many cyclists fitted a conversion axle so they could ride safely on three wheels through the winter months, then when spring returned, remove the axle and reinstalled the single rear wheel.
Some background:  Quality two-wheels-in-the rear tricycles currently are made in the U.K. by Longstaff Cycles and Trykit Conversions/Geoff Booker. They make them rom scratch as three-wheelers, which results in proper geometry and lighter weight.  For instance, there's two rear stays, which extend outward from the top of the seat tube to the outer ends of the rear axle. (Trykit also makes a conversion axle.) 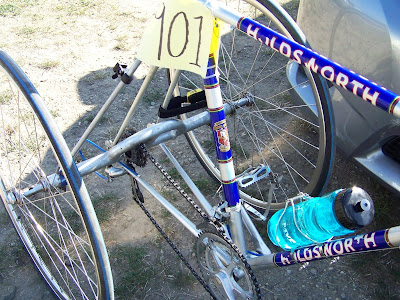 In contrast, David's conversion keeps the rear stays of the original frame, plus two bolted-on stays extend from the seat tube to the outer ends of the axle. 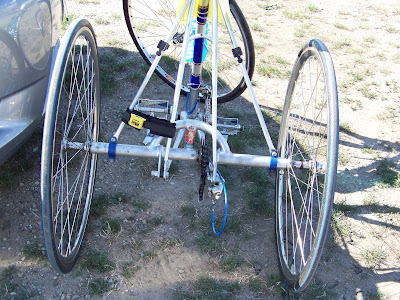 Traditional British trikes, such as David's, only drive the left wheel and there's two brakes on the front wheel, but none in the rear.  The conversion axle fits within the rear stays in order to lower the bottom bracket, hence the center of gravity, plus it moves the rider's weight rearward, which increased stability. 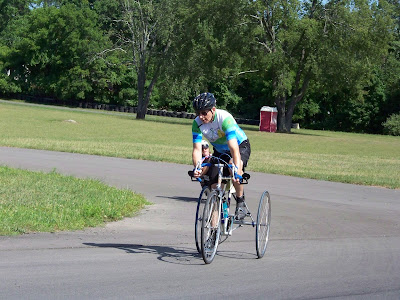 To stay upright on corners, trike riders have to do a lot of leaning, often more than shown here, during the Sunday morning road race.

David did win the tricycle class, but there was only one other competitor, Eric Penn, on a recumbent Catrike Pocket and he only competed on Saturday. Sunday's scheduled tricycles-only race was cancelled.
But still, his performance was impressive.  In the one-hour time trial Saturday morning, he rode ten 1.4-mile laps at an average speed of 17.462 mph.  He had the second fastest time overall in the hill climb, 23.10 seconds (but was 20th in the coast down).  He averaged 18.127 mph in Sunday morning's 9-mile road race. And in the 200-foot flying start sprint, he did 26.61 mph.

To read more about upright British tricycles, go to www.tricycleassociation.org.uk and the March 9, 2017, entry on this blog. Roman Road Cycles, which built two-wheels-in-front upright trikes, one of which is shown in the blog article, is no longer in business.

This game does offer some challenges, but these challenges are often designed to make you laugh. Get more interesting details about car racing check it out.