In 2014, long-time Michigan HPVer Wally Kiehler of Grosse Pointe Woods pedaled 4,244 miles from Everett, Wash., to Gloucester, Mass.
He's about to do it again, only he and "a couple buddies," will be riding from San Diego, Calif., to St. Augustine, Fla. It will be an "unsupported" tour, with the trio eating in restaurants and sleeping in motels.
They're planning to start March 5 and be on the road about seven weeks. Once underway, Wally hopes to write daily updates, which can be read on www.crazyguyonabike.com/wkiehler.  Some preliminary information is already posted there.
In 2014, Wally was one of 30 riders in a supported tour conducted by Cycle America. His account of that ride can be read on this blog.  Scroll down to 2014, then look for "Wally Kiehler's coast to coast adventure." (It's the third article from the top.)
On that ride, Wally started on his Lightning P-38. Then when the ride crossed through Michigan, he switched to his lighter, faster carbon fiber M5.
This time, he will be on the P-38, which is more comfortable than the M5 – the seat on the P-38 is wider and "very comfortable" – and "is set up perfectly for carrying cargo," he wrote  in an email.
AN EARLY END:  The journey of Wally and his two companions came to a premature end in Las Cruces, N.M., on March 16 after 614 miles, as the coronavirus crisis made it increasingly hard for them to stay in motels and eat in restaurants.  You can read about what happened in Wally's  crazyguy report.

After Wally returned home, he wrote this summary (slightly edited) for the blog:

This adventure was a disappointment for me, as I wrote in my daily ride journal, except getting to visit with my two children and riding with two coast-to-coast buddies (from the 2014 tour).  It only lasted around 10 riding days.
So there isn’t much to add to what I wrote every day.  I have already mentioned about my lack of preparedness, the unexpected incredible hills, the unusual large amount of rain and, of course, the coronavirus.
Some might ask if I plan to return to complete this adventure.  At the end of our last riding day, plus three days of driving home, I was tired and very disappointed in attempting this adventure.  At least for this year.  So I don’t know the answer right now.
But one thing that I did learn is that I will never attempt another “hilly and loaded tour” again.  Especially on a 60-pound loaded recumbent.  It was way more work than fun for me. 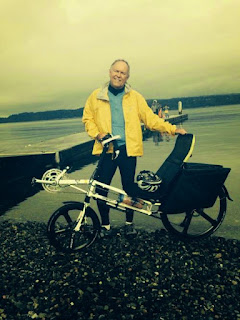 It's June 15, 2014, and Wally Kiehler dips the rear wheel of his Lightning P-38 in the Pacific Ocean at Everett, Wash., at the start of his cross-country trip.  He will be riding the same P-38 on his new cross country trip from San Diego to St. Augustine, scheduled to start March 5.