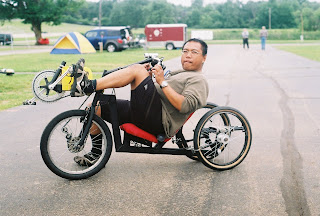 M. Jensen Didulo of London, Ontario, had his not-quite-finished tilting tricycle, the Magic V2.0, at the Michigan Human Powered Speed Challenge in July 2009, then had it at the Michigan HPV Rally June 12-13, 2010, in finished form. At home, he uses it as his around-town commuter. 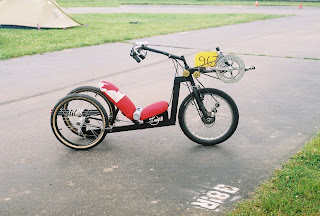 Here's what Jensen wrote following the rally in an online discussion about tilting tricycles in the "homebuilders" section on the
bentrideroneline.com site. (Some editing was done by the blog editor.)
In it's current form, the Magic V2.0 has one advantage vs. a bicycle -- its cornering capability. For practical reasons, rather than theoretical), two rear wheels have a little better grip than one and that little extra is enough for the trike to out-corner everything except other tilting trikes.
That said, many tilting trike designers add some kind of zero-speed stability, either with some kind of self-righting mechanism or a tilt lock. I plan to do this also, but have been working on a much lighter mechanism than the typical disk-brake types, or one that engages in more positions than the locking pin type. (Editor: That is, the rider has to
balance as if he was riding a two-wheeler; there's no mechanism to keep it erect when moving, or when stopped. Jensen informed me later that rather than add such a mechanism to his existing trike, he may build a new trike.)
With a tilt lock, a tilting trike has all the static advantages of other three-wheelers, while keeping their cornering advantage over two-wheelers.
The main reason for the development of many more delta tilters (two wheels in the rear) vs. tadpole types (two wheels in the front) has to do with aerodynamics. No matter how sophisticated the design, a tadpole tilter will still have a larger frontal area, whereas a delta tilter can be designed to hide the rear wheels within the wind shadow of the rider.
The reason for all the parallelogram tilters is that they can be any rear track width. No matter the lean angle, the center of mass remains within the footprint area of the three tires and no rollover condition exists. In the case of a simple tilter like the Magic, the pivot height cannot exceed half the rear track width or you can have a rollover condition with high lateral G force. The only reason my tilter has such a narrow track is that the pivot is about 5 inches from the ground. Most single-pivot designs have the pivot at axle height, forcing a track width at least 20 inches. 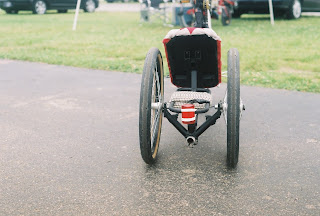 THE LOW PIVOT POINT, only about 5 inches from the ground, enables the wheels to be only about 14 inches apart. The result, as Jensen demonstrates, is that he can lean to an extreme degree when cornering. 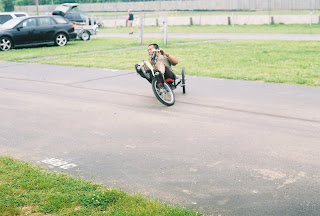 Jensen can be contacted at purplepeopledesign@gmail.com.