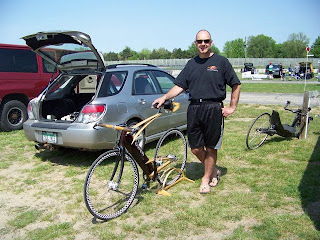 Ken Stolpmann of Charlevoix and his wood fixie Owen Bike.  My photos didn't do it justice, so the photo below comes from the www.cyclelicio.us site, which in turn got it from Ken. Do an internet search of his name and you'll find more photos, most taken before he added the wood handlebars and bottle cages. 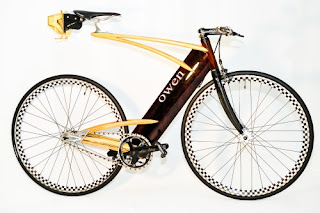 Ken Stolpmann of Charlevoix came for the first time to the Michigan HPV Rally in 2013 with two bikes he built himself – one a work of art and the other a work-in-progress.
The work of art was an upright wood bike; the work-in-progress was a carbon fiber low racer, which he raced at Waterford.
By profession, Stolpmann is a builder of wood boats, a trade he learned in his native New Zealand as an apprentice to Owen Woolley, hence the name Owen Bikes. (Ken's now former wife is from Michigan, which is how he ended up living here.)
“At the moment, it's a hobby I enjoy,” he said at the rally, though he exhibited this bike at the the North American Handmade Bicycle Show in Denver last February with the goal of creating and selling more bikes. He also showed it at the Detroit Bike City show at Cobo Hall in March.
The main beam of the bike (the dark wood) is mahogany around a honeycomb core; the seat beams and stays are hickory. The dropouts, head tube and seat post were machined from aluminum. The dropouts are glued and bolted to the frame.
He used mostly WEST SYSTEM expoxy (manufactured by Gougeon Brothers Inc. of Bay City) to glue the wood pieces together. The frame was finished with three coats of clear epoxy and then three coats of a clear automotive finish.
This was the second wood bike Stolpmann has built. “It was a fun bike to build,” he said. Despite it's “for show only” appearance, as of the rally, he had ridden it about 2,000 miles, using mostly the fixed gear side of the flip-flop hub. (Pull the wheel, turn it around and remount it and it's a single-speed freewheel.)
In addition to the wood frame, Stolpmann made the handlebars from Douglas fir and two water bottle cages from wood, which he is thinking of making and selling separately. They would make nice additions to some classic steel frame bikes.
He's also planning to make wood deep aero rims, which would lace to the hubs with conventional steel spokes, and four-spoke all wood wheels.
An article on the www.cyclelicio.us site quotes Stolpmann that having him build a similar wood bike ffor a customer would cost “around the $6,500 mark.” 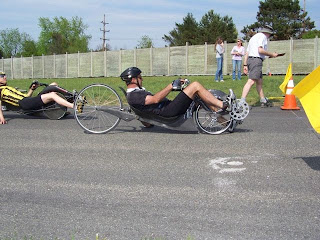 Ken Stolpmann on his homebuilt carbon fiber low racer, waiting to begin the standing-start half-mile at the Michigan HPV Rally.

As for the carbon fiber low racer, he said, “I always wanted a recumbent. I built it to see if I could do it.”
He first started building a recumbent from wood, but it wasn't light enough, so he built the carbon fiber bike last winter.
Unfortunately, with its moving bottom bracket front-wheel-drive, handling was not what Stolpmann desired. Here's what he wrote in an e-mail to me (Mike E.) following the rally:
“The latest on the low racer. I had a lot of fun at the Waterford race and met a lot of interesting people with valuable input.
“I really went in the deep end learning to ride the bike during the one-hour time trial and crashed on the finish line. After talking to (recumbent builder) John Morciglio, I persevered with riding the bike, but had another good crash and lost a lot of skin and decided for a few reasons to not pursue the moving bottom bracket design.
“I want to be able to ride with just one hand if I so desire and be a bit more relaxed than what the current design allows. I talked to John Morciglio again and decided to sell the front subframe and build a more conventional low racer.
“At this stage I haven't touched the bike since Waterford as I have been working almost without a break since the start of summer. The plan is to cut the frame off behind the steering head and build a boom much like John's M1.”
Stolpmann can be contacted at woodenfixie@gmail.com or probike17@gmail.com. 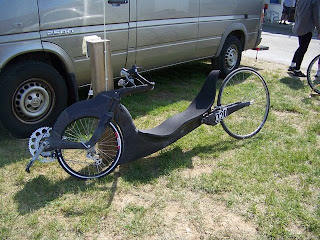 Due to his experiences at the Michigan HPV Rally with the moving bottom bracket, Ken has given up on the design. He's planning to rebuild the bike by cutting off the frame behind the steering head and replacing it with a boom and stationary bottom bracket.
Posted by mike at 11:49 PM

I have enjoyed reading your post. It is well written. It looks like you spend a large amount of time and effort on your blog. I appreciate your effort. Please check out my site.
TLR Carbon wheels