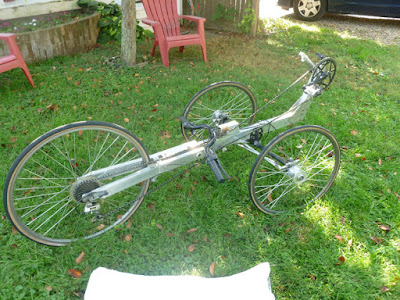 BRUCE'S TRICYCLE HAS A NEW OWNER, BUT SINCE IT'S A RATHER INTERESTING DESIGN, I'LL LEAVE THIS ENTRY HERE (minus the contact information). It's one example of how a recumbent cycle (two or three wheels) can be constructed from aluminum tubing, bolted, glued and/or riveted together, with little or no welding needed.  Mike E.
Bruce and Linda Gordon, long a part of the Midwest HPV community, will be moving around June 1 from Buchanan, Mich., to Newark, N.Y. , Their daughter, a pediatrician, now in Niles, Mich., has accepted a job in that part of New York state, between Rochester and Syracuse, so Bruce and Linda are moving to stay close with her and her family.
Newark sits along the historic Erie Canal and a lengthy bicycle trail runs alongside the canal. So Bruce is taking most of his fleet of recumbent tricycles (plus one 4-wheeler).
But he’s looking for a good home for this recumbent tricycle, which he’s willing to give away for free. 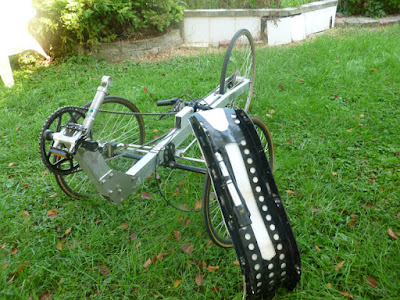 The back side of the seat that comes with the trike is shown in this view. The seat will have to be adapted to fit on the frame. Because of the rear suspension, support stays can't run from the seatback to the rear wheel stays.

It was built by Mike Sova of Toronto, who gave it to Jim Iwaskow of Richmond Hill, Ont. Jim raced the trike at the Berrien Tricycle Rally organized by Bruce in June 2014 at a kart racing track near Buchanan. Jim said at that time that Mike had built the tricycle “some time ago,” possibly a couple of decades earlier or more.
Bruce became the next owner.
The tricycle is built of rectangular aluminum tubing, welded and bolted together.
It has rear suspension – the pivot is the small circle behind the handlebars – which in turn means the seatback must be self-supporting. That is, it isn’t possible to run support stays from the seatback to the frame stays.
Bruce has a seat (not the one used in 2014) that can be adapted to the trike.
Tires update: The front wheels use 24x1/520c tires; rear is 700x28c.  The only tire for the front that I (Mike Eliasohn) could find is the Panaracer Pasela. J&B (www.jbi.bike), probably the country's largest wholesale supplier to bicycle shops, as of April 2 had the Pasela in stock at all of its warehouses nationwide, so any bicycle shop that gets  parts from J&B can order 520c size Paselas. J&B does not sell direct to consumers. 700x28c is a common size, so easily available. 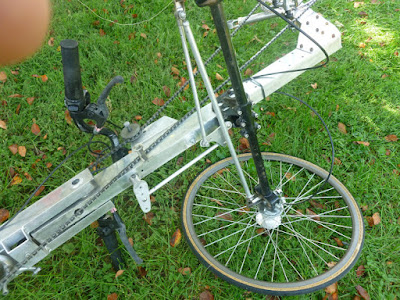 Notice the suspension pivot behind the handlebars and how the axle is attached to the  rectangular aluminum frame. Possibly the axle could be removed and the tricycle could be converted into a two-wheeler.

Remember, the seat needs mounting, And I (Mike Eliasohn) think lowering the bottom bracket would be worthwhile, which would require drilling out the rivets and then doing some fabrication.
In other words, Bruce’s trike is a project, not ready to go.. 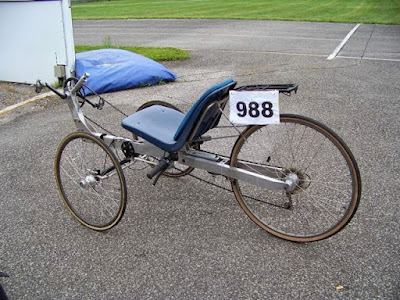 These two photos were taken at the Berrien Tricycle Rally organized by Bruce Gordon in June 2014.  Racing the tricycle was Jim Iwaskow, who was then the owner. 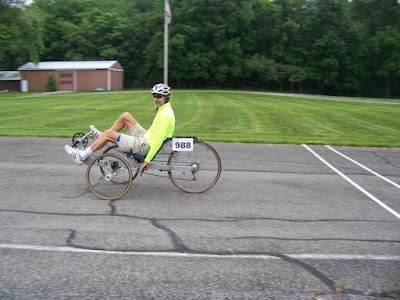 Posted by Michigan Human Powered Vehicle Association at 11:50 AM