Nothing has changed yet since I posted, "Will there be a Michigan HPV Rally in 2020?," on March 22.
Gov. Gretchen Whitmer's current stay-at-home order expires April 13. It seems very likely it will be extended. Once she updates her order, Mike Mowett and I will decide on the fate of the rally, though the decision may be made for us.
Should her extended order end May 15, we have to decide do we want to meet the day after that.
If we do not or cannot conduct the rally May 16-17, there are some choices:  1) Cancellation, that is, no rally this year; 2) reschedule the rally, if there's an open date in July or August at Waterford Hills; 3) if not, conduct the rally elsewhere, for instance, could we rent a paved oval race track somewhere; or, 4) my admitted favorite, conduct an informal gathering   on a Saturday in August. The gathering could be at a large parking lot and/or on roads that have little traffic on Saturdays – for instance, at a college, factory or church.(Access to a restroom at the site would be necessary. No, "McDonald's is 2 miles down the road.")
The gathering would be free, unless the area is big enough to conduct a time trial, for which we might have to charge a small amount to pay for insurance.
And if worse-comes-to-worse, it would be easy to cancel. (In other words, no track rental fee to get refunded, no advance registration, etc.)
So if you have a preference for one of the four alternatives, or other suggestions, PLEASE post something under "comments" or send an email to me at mikethebike2325@comcast.com. And if you know of an alternative site to Waterford Hills, presumably an oval race track or large parking lot, please let me know (especially if you have connections).

New vehicles: At the 2019 Michigan HPV Rally, Rob Lloyd of Whitmore Lake said the next recumbent he was going to build would be for his son, Cameron, who was then 12.
(See blog article dated Aug. 20, 2019)
Cameron's new ride is now done. Here it is: 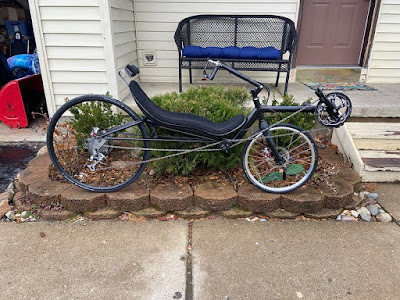 Rob documented the entire build process on bentrideronline.com.  Go to "specialty discussions," then "homebuilders," then "Mid-racer --- for a shorter rider."
Meanwhile, Charles Brown is still building his newest wood recumbent at home in Southfield. (Now that he's a homeowner, hurry Charles and get it done before lawn mowing season starts.)
Here's two photos, which he sent me March 30. 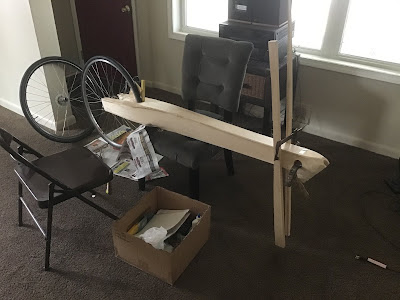 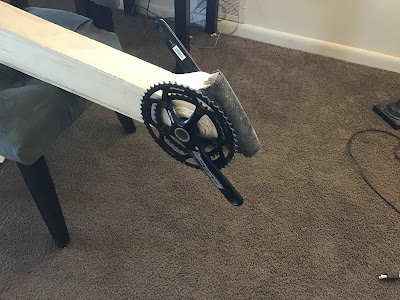 And here's the latest project of Terry Gerweck of Monroe, pieced/welded together from three or so frames, and obviously not for racing. Wheelbase is about 46 inches. Next, Terry has to work out the seat. 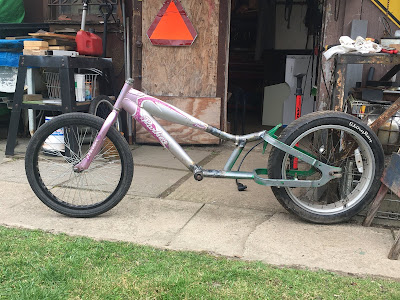 Updates: As originally posted on March 27, "Unique Recumbent tricycle needs new home," Bruce Gordon said because of the odd-size front wheels, he suggested the new owner should build new front wheels using a more common size tire.  But after that, I (Mike E.) did some research.  J&B, a wholesale supplier to most bicycle shops, stocks the tires needed for the current front wheels, 24x1/520c, so the article has now been updated to report that.
So if you read the article and was interested in Bruce's trike, but was repelled by the thought and expense of building new wheels, that no longer is a deterrent.
And the article, "Wally's next adventure," originally posted Feb. 24, has now been updated to include some comments from Wally Kiehler after he got home, after his planned coast-to-coast ride was cut short because of the COVID-19 epidemic.

And lastly, hopefully a bit of humor during these grim times.  The idea was mine; the drawing is by Charles. 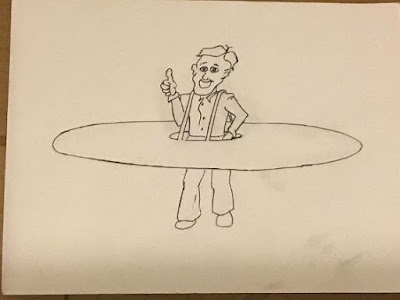 Wherever you go, keep everyone
at least 6 feet away