Some Thoughts from Charles Brown

Charles wrote the following to Mike Eliasohn in September 2006 in response to his query whether we should continue the "best homebuilt" prize at the Michigan HPV Rally:

Now, originally the International HPV Association was concerned strictly with speed, which resulted in streamliners that were good only for racing. Trying to come up with more practical vehicles, they came up with partially-faired and unfaired classes. These ultimately resulted in low racers, which are about as high as the hubcaps on a SUV, so again, maybe not so practical.
Why not just give that (best homebuilt) award to the best "street racer," the one that best combines speed with real-world practicality?

There are a LOT of MHPVA people who are into developing such a bike, probably more than any other HPV group...

Our Michigan group probably has the highest proportion of its members interested in fast bikes you can still use on the road, and we really don't have a contest for it.

The stock/semistock/etc. classes didn't work, the urban transportation contest depends on a questionable set of criteria. This (a new contest) could really give practical vehicles a boost.
I know I would sink my teeth into it. Ideally there would be a first, second and third place, and several people judging to eliminate (single) judges' biases.
I would belately nominate Wally's Lightning F-40 for the '06 season.

And in response to my comment that it would be nice to have more racers of conventional upright bikes competing at Waterford, Charles wrote:

I was thinking about this for a while and think the solution is to come out with a new "UCI legal" class...This would be a division of the stock class. Roadie-types would have some of their own kind to race against, and it would keep us (recumbent riders) on our toes, as well as to stay ahead of them.
Posted by Ethical Paul at 12:57 PM 2 comments:

Jeff Potter of Out Your Backdoor Press in Williamston has come out with a third edition of Gunnar Fehlau's "The Recumbent Bicycle." Better paper, better photo quality and photos of some HPVs you will recognize. There's even a photo of and lengthy paragraph about Charles Brown's wood recumbents. Some other photos include John Simon in his red Moby. the lineup for the start of one of the races at the Michigan HPV Rally and the Black Bear race.
Even if you have the first two editions (like me, Mike E.), buying the third is worth the money -- $24 including postage.

Jeff also has numerous other books available, some on bicycle topics. Go to www.OutYourBackdoor.com
Posted by Ethical Paul at 12:52 PM No comments: 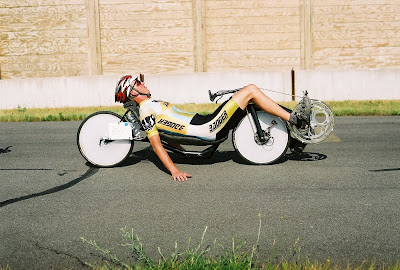 Dennis Grelk of Donnellson, Iowa, gets ready for the start of an event.  He won the stock class for the weekend on his homebuilt low racer.

The 24th annual Michigan Human Powered Vehicle Rally June 23-24 attracted 38 riders and at least that many vehicles. There were two tandems and at least four riders competing with two or more vehicles.

It was Dennis Grelk’s weekend in more ways than one. He won the stock class on his homebuilt low racer. That class had the most entries, 16. Riding the Barracuda streamliner built by Warren Beauchamp, which Dennis now owns, he finished second in the streamliner class behind John Simon in his Moby. And riding a Bachetta Corsa, Dennis also competed in the urban transportation contest.

The 38 riders was an improvement over the 29 we had last year, Many of the regulars were missing, but we had several newcomers, including a contingent of low racers from Ohio recruited by MHPVA President Wally Kiehler at the Calvin’s Challenge ride in Ohio.
Also encouraging were the 34 vehicles and 32 riders competing in the Sunday events. (Three riders competed with two vehicles and there was one tandem.)

This was the first year we gave cash prizes instead of merchandise. Nobody kept track of who got how much, but the total, coming from entry fees, was $335. 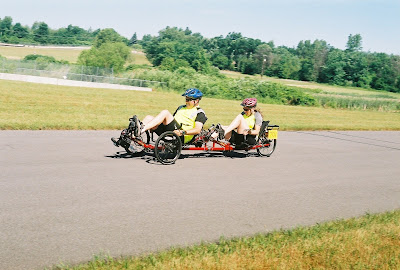 Dan Thorne and his daughter, Julie Pitko, of Sault Ste. Marie on their way to 29.9 mph in the 200-foot sprint event.  Riding a WizWheelz tandem, they were first in the tandem class for the weekend and also won the urban transportation contest. (What was WizWheelz is now TerraTrike, based in Grand Rapids.)

The first event was the one hour. In the streamliner class, Dennis edged out John Simon of Portland, 31.5 miles to 31.2 miles. In the second one-hour, Dennis won first place in the stock class on his homebuilt front-wheel-drive low racer, 26.7 miles. 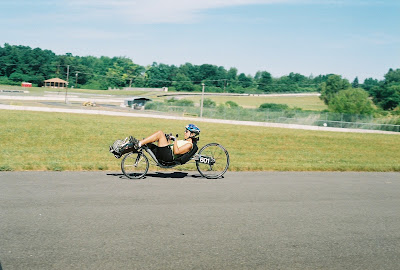 Dora Cortez of Chicago finished first in the women's class for the weekend on her Optima Baron.  Her speed in the 200-foot sprint, shown here, was 28.5 mph.

Garrie Hill generously posted some cash prizes for the 200-foot sprints. Here's his description of the prizes: “The GeeBee Cup cash awards for the 200-foot sprints this year were for the top speed in streamliner, stock (male), stock (female). I'd originally said that the winners would receive their speed in cash, i.e. 29.33 mph would win $29.33. There would be an additional cash bonus for speeds "above and beyond" certain numbers (which I don't remember) I listed (somewhere!). I do remember the streamliner mark was 45 mph. Frank Geyer posted a top speed of 43.56 mph. I presented him with $75 because he managed to turn in that speed after crashing the new Frank-n-Liner about 15 times in launching! Dora Cortez got $75 for her effort of 28.52 mph because I was feeling generous, and still laughing from Frank's escapades. Thom Ollinger received $75 for his 36.65 mph run because he proved that putting an old guy (Thom) on a fast machine (my NoCom) does make the old guy fast!”

The final events were the two road races using the .624 mile short course, which does not include the hill. 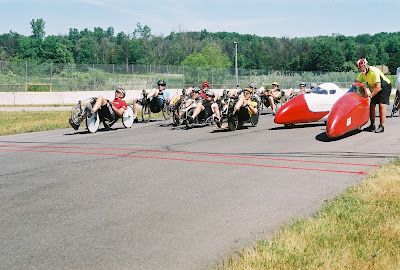 Entrants line up for the start of the 20-lap road race on Sunday morning.  John Simon of Portland in the red Moby at far right won the race and the streamliner class for the weekend.

John Simon won the 20-lap race in his Moby streamliner at an average speed of 27.8 mph, followed by Dennis Grelk on his stock class lowracer, with Warren Beauchamp on his Velocraft NoCom in third.

Wally Kiehler on his superstreet class Lightning F40 won the 15-lap road race at an average speed of 21.7 mph, followed by Scott Forthofer on his stock class Softride upright bike second and David “Doc” Pearson third in in his superstreet Infinity.

As the sole judge for the “best homebuilt prize, I (Mike E.) couldn't make up my mind, so $10 was given to Warren Beauchamp of Big Rock, Ill., builder of the Cuda-W streamliner, and Jim Iwaskow of Richmond Hill, Ontario, builder of the Figure 8 carbon fiber short wheelbase.
Niether bike is new. Jim built his short wheelbase bike in 2002, but has made improvement since. He shaped the frame out of foam, then covered it with carbon fiber. He also make the fork, seat and handlebar mast from carbon fiber. (the mast and, I think, the fork have since been replaced.) New this year was the tailbox. He first made a plug, then a mold, then a single layer of carbon fiber (or fiberglass – I neglected to write it down) inside the mold. The tailbox weighs 5.5 pounds. The bike, 24 pounds. The rear wheel is 700c; the front, 20 in.

Reg Rodaro of Niagara-on-the-Lake, Ontario, built the plug, female mold and fairing to Warren's design. Warren did the rest, including the front subframe that bolts to the monocoque. It's a front-wheel-drive, with gearing provided by a 14-speed Rohloff Speedhub driving a 406mm (20-inch) wheel. The rear wheel is a 700c that bolts to dropouts that bolt to the monocoque.

In 2005, Warren pedaled the Cuda W to 64.4 mph at Battle Mountain, Nevada. As of the rally, he still have front and rear wheel fairings to make and was still fiddling with the subframe.
If you want to see the entire building process for the Cuda W, go to www.recumbents.com (of which Warren is the Webmaster), then click on “recumbent building,” then “human powered vehicle research and development,” then on “Reg Rodaro builds the Cuda-W.”

Other homebuilts of note at the rally – there aren't many of them these days – included Dennis Grelk's stock class entry, previously mentioned, and the Rick Wianecki/Frank Geyer Frank-n-Speed streamliner that was still experiencing teething problems. 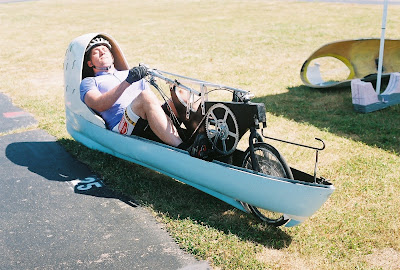 Frank Geyer of Brighton and Rick Wianecki of Okemos experienced a lot of problems with the new Frank-n-Liner built by Rick.  But Frank did have one good event – first place in the streamliner class in the 200-foot sprints and top speed of the rally at 43.6 mph. 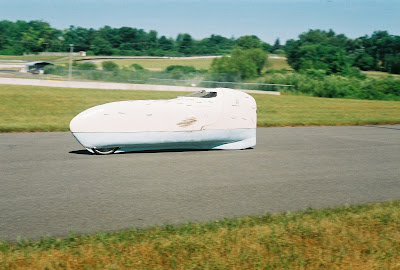 Posted by Ethical Paul at 11:21 AM No comments: 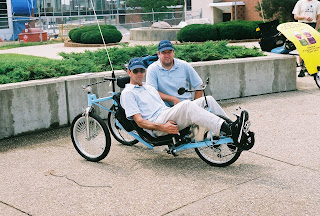 Timothy Heist and his son, Louis Jasinski, came all the way from Reading, Pa., – 627 miles each way – with their two homebuilt trikes to participate in the Michigan Recumbent Rally - West Sept. 9, 2006, on the Western Michigan University campus in Kalamazoo.

The following day, they rode them in the Vineyard Classic Bicycle Tour that starts and ends in Paw Paw. As of then, Tim said they had built five recumbent trikes. “It’s just a hobby,” said Heist, who does steel fabrication for a living. Although a hobby, their creations have a name, Scorpion Trikes.

He said he first got interested in building recumbent trikes after his 86-year-old father saw a photo of one in the Philadelphia Inquirer newspaper. “My dad showed it to me and said, ‘Maybe you can build one of these.”

He started building his first a couple of years ago. Before then, he said, he used to drag race motorcycles and built his own drag bike (”drag bike” as in “motorcycle.”) “I enjoy the fabricating and design process, learning what works and what doesn’t.”
Trike No. 5 has been a real learning experience – propulsion is via the single front wheel, which Tim straddles, and the rear wheels do the steering.

That’s not a new concept, and some lean while cornering. The Heist/Jasinki rear-steerer doesn’t lean, but apparently does solve a problem many of them don’t – instability at higher speeds.

The other Scorpion trike at the rally is more conventional in that it’s rear wheel drive, and the two front wheels do the steering. But instead of using hubs that require building special wheels for the front, the frame supports two head tubes and two regular front forks, so regular front wheels can be used.

Each trike at the rally weighed about 70 pounds. The frames are made from regular 1-1/4-inch square tubing (not thinwall chromoly) and 1-1/2-inch wide steel channel. The wheels and components come from bikes bought at Wal-Mart.

Tim and Louis are now working on tricycle number 6 and hope to bring it to the Michigan HPV Rally in June. The two front wheels will be in a fixed position. The single rear wheel will do the driving and steering!

Thanks also to Breakaway Bicycles in Portage for bringing several recumbents to the rally on Sept. 9 for people to test ride – and hopefully buy. 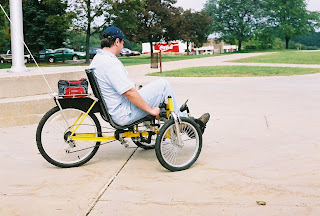 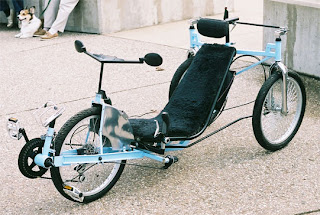 THE FRONT-WHEEL-DRIVE TRIKE. Shifters are at the sides of the seat. What looks like handlebars above the front wheel is the mount for the rearview mirrors.

Posted by Ethical Paul at 10:30 AM No comments: