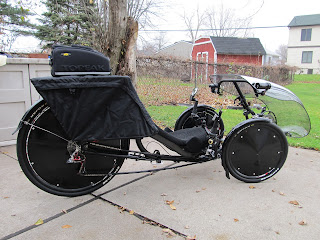 I was looking for a little more protection during upcoming cooler weather, so decided to build a fairing for my ICE Vortex tricycle, something that could be taken off without too much problem, if need be.
What you see here was the patterns made from cardboard for testing, which were held to the framework with wrapping tape..
The more-or-less finished fairing attaches the corrugated plastic side panels to some strips of aluminum bar stock with screws, nuts and rivets, covered with duct tape.
If the Vortex had center steering, my hands wouldn't have to stick out. But since it doesn't, a good pair of mittens has worked fine when the temperature was in the low 30s and the wind was blowing 10 mph.
I bought the 2011 Vortex used with about 100 miles on it. (Starting price new for the sub-29 pound Vortex is $3,860 – www.icetrikes.com).
I wondered why the guy sold it with so few miles and discovered he may have had the same problem I did. The crank geometry was off, so it hurt to pedal, that is, the cranks seemed to be too low for me. I experimented for three months and even thought of selling it, but finally found a position I could be comfortable with, which I achieved by folding a seat pad in half and putting it at the front of the seat, thus raising the front of the seat.
I still can't go fast with the Vortex. I am used to spinning about 90 rpm and higher. On the Vortex, the best I can do is about 70 to 84 rpm, so to compensate, I must push a higher gear to get into the 20 to 26 mph range, unlike on my Predator (an Optima Baron low racer with Doug's homemade fairing – see photo below).
But the more I ride the Vortex, the more I like it, because I don't have to put my feet down to stop. The fairing is an added bonus. 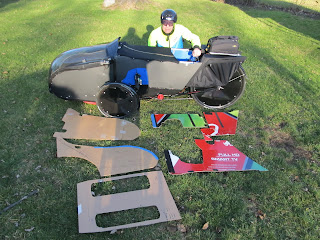 Doug with the more-or-less finished velomobile. The corrugated cardboard used for patterns is in the foreground.

I started turning the Vortex into a velomobile a year ago, but didn't start seriously working on it until September or October. It is an ongoing project, since I can only work on it outside. I have too much junk in my garage to work on it there and it's too wide to take it into my house. So when the weather permitted, if not at my job, the only hours I had to work on it were from 8 to 9 in the morning until 8 to 9 at night.
The windshield part of the fairing is a Windwrap GX , which sells for $224 plus $20 for tinting (mine is tinted), plus its One Point tilt mount, which clamps to the boom tube behind the bottom bracket, $375. Windwrap is owned by TerraCycle (www.t-cycle.com), which makes and sells all kinds of interesting accessories, mostly for recumbents. I also bought a light mount from them for $12. Add shipping and handling and the total was $660.96. Cha-ching.
The cover over the cockpit opening is Lycra stretch fabric.
I had been looking at trikes for a couple of years and finally bought the Vortex after an accident I had on the Predator at about 4:30 in the morning. I went about 3 feet and fell over. I had my small waist bag containing keys and phone on my side – which I usually don't do – and happened to fall on that side, cracking or breaking some ribs. That hurt for at least three months.


Unlike on a two-wheeler, not having to worry about stopping at stoplights, either trying to do track stands or unclip, has become great to me.
The bad side is my average speed on the Vortex is 18 mph, and usually 16-17 mph in the city, with a maximum of 32 mph, compared to 36 mph on the flat in the Predator.
With my head exposed, I like being able to go out in the Vortex and not worry about the greenhouse effect. In the Predator, if the temperature and humidity were “wrong,” the inside would cloud up. Not being able to see where you are going is no fun and I've been there too many times.
Because of an operation this year, my training miles were down.(As of mid-December, Doug had pedaled 1,304.17 miles this year, compared to 2,000+ in a normal year. Maybe in 2013, riding more miles will improve my performance on the trike. 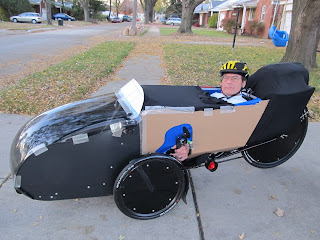 DOUG IN the almost finished velomobile. The cardboard (light brown) side panels were later replaced with corrugated plastic panels. 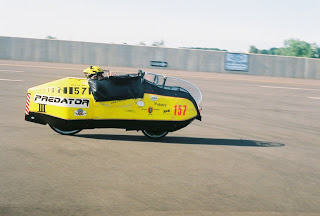 DOUG IN THE PREDATOR – an Optima Baron with homemade fairing – at the Michigan Human Powered Speed Challenge in 2009 at the Ford Motor Co. proving grounds near Romeo. On the 5-mile oval, he pedaled 100 miles in 4 hours, 3 minutes, 52 seconds for an average speed of 24.6 mph. He's gone as fast as 37.2 mph in the Predator, but not at the MHPSC.

Editor's note: Doug also wrote a review of his Louis Garneau Vorttice Black Knight aero helmet (www.louisgarneau.com):
I have worn it a couple of times in cold weather, including Dec. 23, when it was 30-34 degrees. It looks like that was the last day I will wear it for a while.
European sizes run differently, it would seem, than in the U.S.A., which I should have learned by now. It seems their sizes run one or two smaller sizes than ours. I wish I had bought a small and a large size (there's no medium), then return the one that didn't fit right.
My head size fit in the small size range (20.5-22 inches), but the small size I bought fits really tight. I have a bit of a problem with the visor and my glasses. If I wear a balaclava, it helps pad my ears, but, did I say it fits tight?
The helmet design helps circulate the air, but I never got cold. The small vents on top and the funny looking slashes in the visor some way (so far) keep the visor and my glasses clear, that is, no fogging, which is the opposite of my experience with other helmets in past years.
When I first put the Black Knight on, my wife said, “Yep, your head looks like a golf ball.” It has dimples and a few other do-dads that I assume direct the air flow. Those dimples make me wonder if covering my bike with them would make me go faster.
Laugh if you want, but my grandson went to a Pinewood Derby some years ago and a kid showed up with a car that looked like someone beat it with a ball peen hammer... Guess who won? 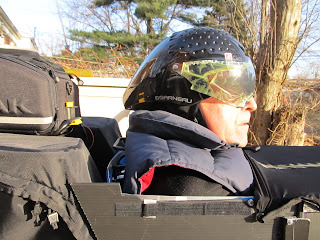 I can't really say what kind of aero effect the Black Knight has, but with its short tail, I can get inside my partially enclosed trike with no problem. There's been no rubbing problems.
Despite the price (manufacturer's list price is $260), I bought the Vorttice Black Knight because I liked the name, it looks neat, especially with the visor down, it keeps my head warm and – a special, welcome treat – my glasses clear.
Also, the strap adjuster is easy to get to and requires only one hand to adjust the wheel on the back of helmet, Just turning it one way or another gives a good fit.
It will be interesting to see how the helmet operates in hot and humid air. The strange sticker warning on top says: "Do not expose the helmet to the sun or any other potential source of heat for a long time." Well, there goes my competing in the Ironman triathlon in Hawaii this year.
Posted by mike at 11:45 PM No comments: