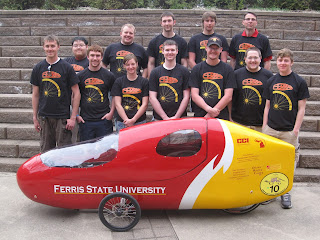 The Ferris State University HPV team poses with its entry in the American Society of Mechanical Engineers eastern region competition, which Ferris State hosted for the first time. This was the fifth year the university has entered; with all of its vehicles being tricycles. (Ferris State Univ. photo)


Words and photos (except one) by Mike Eliasohn 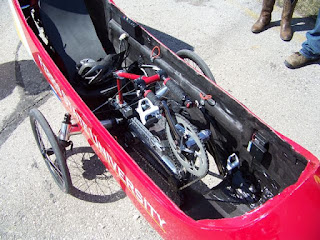 In the ASME competition, vehicles have to accommodate various size riders, male and female. Ferris State's solution for quick rider changes was a bottom bracket that could be pivoted back and forth, made possible by having the chain go from the single chainring to an idler/pivot point beneath. (The low-tech method some teams used was easily removable seat padding; the shorter the rider, the thicker the pad.) 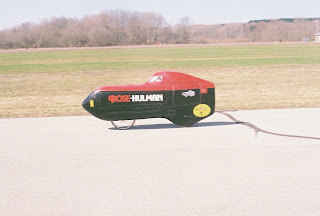 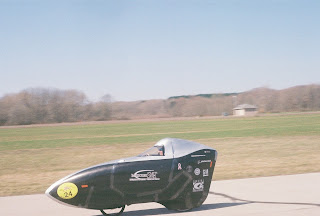 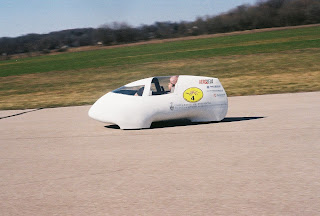 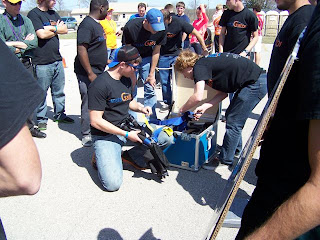 During the innovation judging, the team from the University of Florida in Gainesville demonstrates their InstaGator, all of which can be transported in the blue case. (The 18-inch wheels will fit inside, with the rest of the disassembled bike, but spokes might get bent, so the wheels were carried separately.) 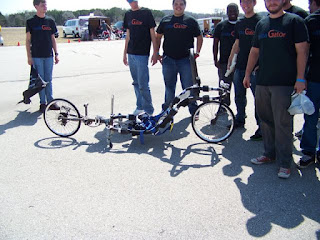 When finished, the result is this front-wheel-drive recumbent, with rear-wheel steering (and two outrigger wheels). Holding everything together are eight torque couplings, two of which are necessary to hold the ASME-required rollbar. "A lot of our fun is trying new designs," said team member Daniel Ross of Merritt Island, Fla. The InstaGator earned second place in the innovation judging and ninth overall. 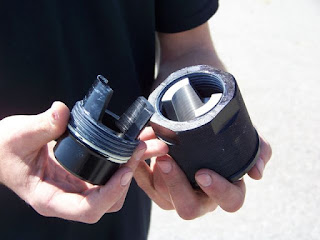 Each of the InstaGator's custom designed and machined couplings weighs 2.3 pounds. The frame is made from 1.5 inch .065 inch wall 4130 chromoly tubing. Fourteen U-F team team members made the 22-hour drive from Gainesville. 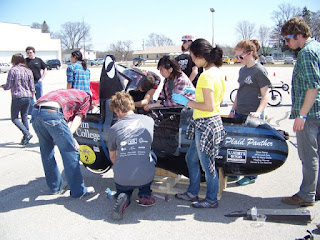 Students from Franklin W. Olin College of Engineering in Needham, Mass., work on their vehicle April 27 at the airport.A goal in its design and construction was to save weight over Olin's previous vehicle, which weighed 70 pounds; the new one is 15 pounds lighter. Olin is an engineering-only college that started in the fall of 2002. It has about 350 students. 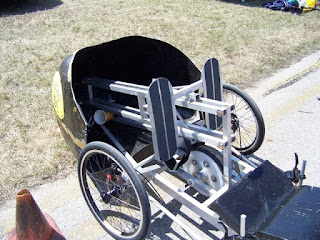 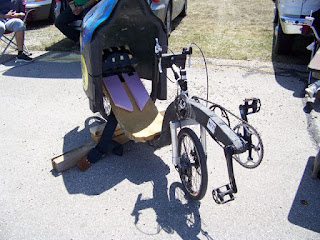 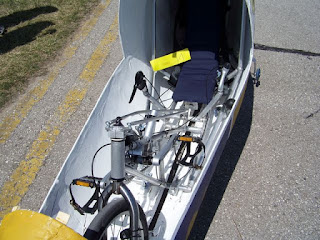 The College of New Jersey (in Ewing) entry featured push-pull lever steering. The drive system consisted of triple chainrings in the front, a crossover drive and 8-speed internal hub as the final drive. The fairing consisted of inner and outer layers of fiberglass, with an 1/8th foam layer in-between.

Although all the entries were recumbents, I found it interesting that the bikes I saw students riding when not competing were all conventional uprights.
In a follow-up e-mail, after reviewing a draft copy of this article, Archibald wrote:
"For your interest, we have had upright bikes compete, including a bamboo frame and some very nice carbon frames. In general, the uprights do well, but they are just not fast enough to win the races. I have seen some exciting drag races between the recumbents and uprights. Our length of 400 meters is long enough that the improved aerodynamics makes the difference, and the faired recumbents win in the end.
In addition to the schools already mentioned, also competing were Union College, Schenectady, N.Y.; Daniel Webster College, Webster, N.Y.; Central Piedmont Community College, Charlotte, N.C.; University of Missouri - Kansas City; University of Wisconsin - Madison; Mississippi State University; SOuthern Illinois University - Edwardsville; University of Southern Indiana; Virginia Tech; University of Kansas; West Virginia University; University of Wisconsin - Milwaukee; Ohio Northern University; and Southern Polytechnic State University, Marietta, Ga.