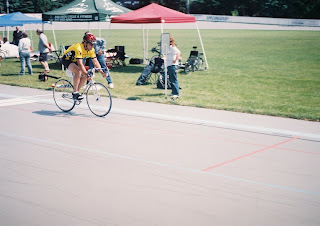 THE RACES AT NORTHBROOK and the next day in Kenosha, Wis., were both on velodromes, so Tedd Wheeler of Reed City raced his Bianchi fixed gear track bike. In the stock class at Northbrook, he finished 9th in the 50-lap race at an average speed of 20.6 mph; in the 200-meter time trial, 5th at 29.02 mph. 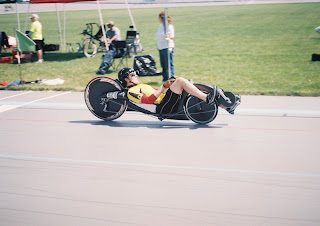 AT THE MHPVA WINTER MEETING in February, John Morciglio of Waterford showed the carbon fiber low racer he custom built for Alan Arial of Illinois. Here's Alan on the bike at Northbrook. In the 50-lap stock class race, he finished third at an average speed of 25.21 mph. 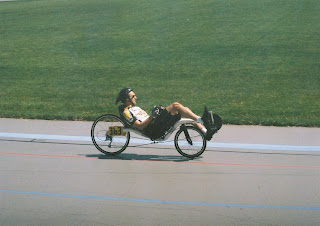 MHPVA PRESIDENT MIKE MOWETT, no longer "upright Mike," on his Baron. In the stock class at Northbrook, he finished fourth in the 50-lap race at 24.74 mph and in the 200 meters, 31.82 mph. Mike, next time, for safety's sake, helmet straight on your head, not tilted back. 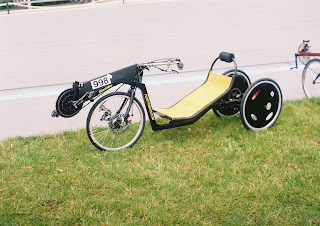 TWO VIEWS of the leaning tricycle built and raced by Tim Hicks of Barrie, Ontario. He won the 20-lap tricycle race at an average speed of 23.54 mph, and again on Sunday in Kenosha. For more information on his very innovative trike, go to his Web site:www.fleettrikes.com, then click on "BlackMax." 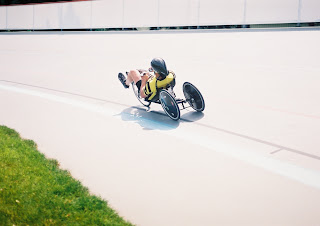 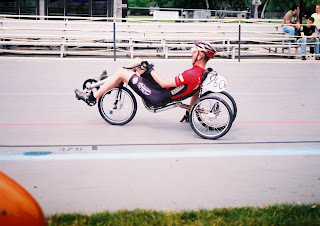 AFTER Tim Hicks won both tricycle races at the HPRA races in Indiana April 25-26, Dennis Grelk of Donnellson, Iowa, built his own leaning trike. The rear axle assembly, with drum brakes (Tim uses disk brakes) bolts onto one of Dennis' home-built front-wheel-drive low racers. He finished fourth at Northbrook, switched the axle to a different bike for Sunday, then finished second at Kenosha. 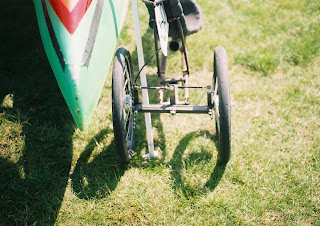