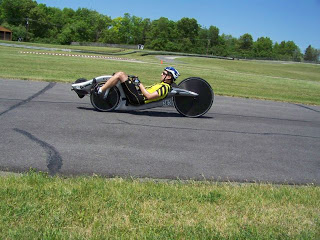 MHPVA PRESIDENT MIKE MOWETT on his John Morciglio-built M1 during the 200-foot sprints at the Michigan HPV Rally in May 2012. In the stock class, he was second fastest in the top-speed event, 39.5 mph. (Mike Eliasohn photo)

Last year was an exceptional racing season for me.  I set multiple stock recumbent records and won multiple races with my M1 carbon fiber lowracer built by John Morciglio of Waterford, Michigan.  In doing so I became perhaps the nation’s fastest-ever stock recumbent cyclist.  (Note: A stock class recumbent is one without an aerodynamic fairing. )
I was proud to race a homegrown product, be the 2012 state 20-kilometer time trial champion, and be faster than nearly all the “pro” Category 1 and 2 cyclists riding upright bikes that I raced last year.  My average speeds of 28- 30 mph on my M1 lowracer I could have only dreamed about in the past on any other bike.  Lance Armstrong’s book, “It's Not About the Bike,” is not correct when you have a bike as fast as a M1 – that is what I told people at the races last year.
I didn’t train any harder, but I went a lot faster due to what the M1 enabled me to do.  It was also a lot of fun to go fast and set speed records!
John Morciglio has built a variety of carbon fiber recumbents over the past five years, but the M1 is his fastest – until he builds something faster!  He is a remarkably gifted craftsman with about 30 years of experience as a master woodworker building custom homes and other projects. He built a few carbon-fiber racing kayaks in the past,before building his first carbon bike.  John got into this sport about five years ago, after he was passed by Chris Evans, also of Michigan, riding a Velokraft NoCom lowracer at a local park.  John had no idea what type of bike had passed him, nor did he have a chance to catch up to Chris who was speeding along.
John then found the recumbents.com website, and saw pictures of the NoCom.  So with little further input and working on his own, he designed and built the M1 lowracer.  He showed up at the Michigan HPV Rally in 2008, totally surprising everyone with his remarkable craftsmanship.  In his home workshop, he’s now built about 40 carbon fiber bikes, including the Apache dual 700 wheel highracer, the Arrowhead 650/700 midracer, the M2 ViperBlue midracer now raced by Brian Stevens of Grand Rapids, a swing-boom front-wheel-drive and a back-to-back tandem. He is currently building a three-wheeled tilting velomobile that will be convertible to a two-wheeler and has started making carbon fiber guitars.
The cost varies according to what the customer wants. The best way to reach John is by email: kmorciglio@comcast.net.  You can see his latest builds, as well as photos of his past projects, at http://s363.beta.photobucket.com/user/JohnMorciglio/library