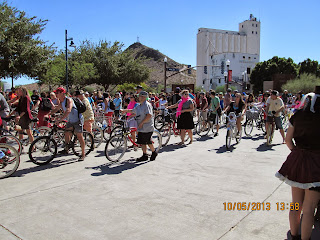 Bikes, bikes and more bikes. It was a steady flow of two (and a few three-wheelers and at least one four-wheeler) into Tempe Beach Park for the Tour de Fat. Wearing of costumes by participants was encouraged. There even were some decorated bikes.

After my 20-minute visit to the Tour de Fat in Tempe, Ariz., in 2012 (see story below posted Oct. 13, 2012), for my annual family visit to Arizona this year, I decided to go on Friday, rather than my usual Saturday flight, so I could spend more time at the event, on Saturday, Oct. 5, and still have time for my "official" reason for visiting.
The Tempe event was the last of 12 Tours de Fat this year sponsored by employee-owned New Belgium Brewing as part of its marketing efforts. The first was May 11 in Atlanta, Ga., and the others were in Washington, D.C.; Durham N.C.; Nashville; Chicago; Minneapolis; Boise, Idaho; Fort Collins, Colo. (where New Belgium is based); Denver; San Francisco; and San Diego.
The "Fat" in Tour de Fat refers to fat-tired cruisers – one is pictured in New Belgium's logo – but any type of bike is welcome. Most were store-bought cruisers, but there also were some  some skinny-tired "fixies" (fixed gear single speed road bikes); discount store bikes; and homebuilt creations. I even saw two Brompton folding bikes (made in England and considered by some to be the ultimate folders).
There certainly were at least a thousand bikes there, and maybe a couple thousand, so I didn't see everything in my approximately 90 minutes there.
Supposedly there was a parade starting at 11 a.m. and I got there shortly before 11.  I saw many bikes being ridden on blocked-off streets, but nothing resembling a parade.
Not being a beer drinker, I avoided the long line (or lines, I forget if there was more than one) for New Belgium's products. The official theme was "Beer, bikes & bemusement," so in addition to beer and bicycles, several music acts performed.
Proceeds from the event benefitted four Arizona bicycle organizations, though since admission was free for cyclists and spectators, and my impression was the beer samples were free, so I'm not sure where the "proceeds" came from. 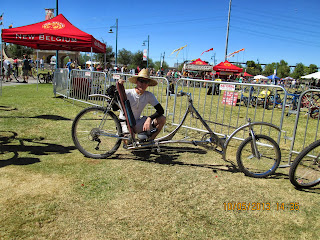 ERIC KROGH of Mesa creates sculptures, furniture and paintings for a living and as a long-time cyclist, "I did this because I wanted to build a bike." He first drew it to scale, then made full-size drawings to use as a guide in bending the mild-steel tubing.  Coming up with the correct head angle for the BMX fork took planning – and some educated guessing. But it  came out right; coasting downhill at 35 mph, he said, "It's very stable." Krogh "finished" the bike two years ago, but didn't keep riding it. He got it back on the road for the Tour de Fat, so now plans to finish it. Still to come are a front deraileur mount, so he can use all 14 gears; capping open tube ends; mounting a headlight at the end of the "stalk" extending from the head tube; paint; and replacing the bicycle saddle with something more comfortable. 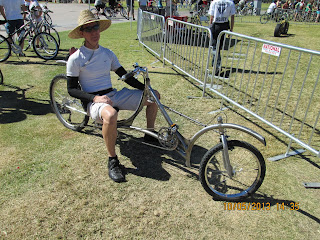 Parts for Eric Krogh's creation came from at least three bicycles. It has a 26-inch rear wheel and 20-inch in front. Another view of the bike can be seen on his website, www.surrealnouveau.com 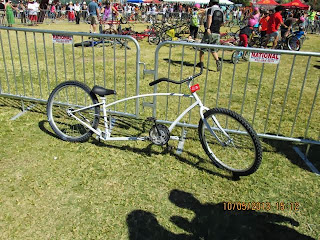 The rider of this stretch cruiser said he and a friend built it in four hours the day before the Tour de Fat. 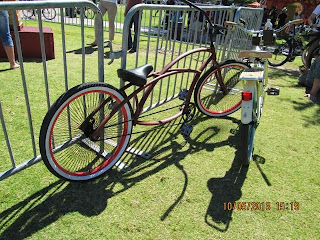 Not sure if this was a homebuilt stretch cruiser, or manufactured. Regardless, with all the curves, a stylish machine. 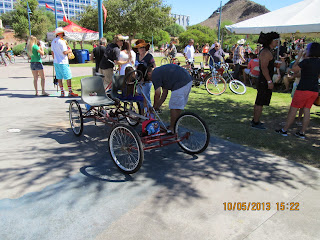 An interesting four-wheeler. Again, not sure if it was homebuilt or bought from a manufacturer. 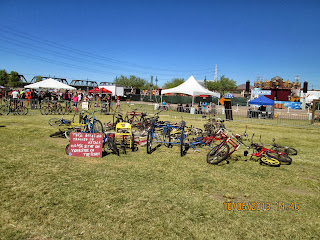 I'm not sure what this was, other than a bunch of weird, obviously homebuilt bikes, in a fenced-off corral, with two security guards at the gate. Later, and seemingly all at once, the bikes were being ridden, which wasn't necessarily easy on the grass. One interesting bike, second from right, was a side-by-side tandem upright two wheeler. 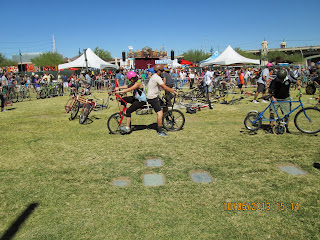 Action in the corral. Apparently on this bike, the rider doing the steering pedals in a normal manner, while the rider in the rear pedals "backwards."