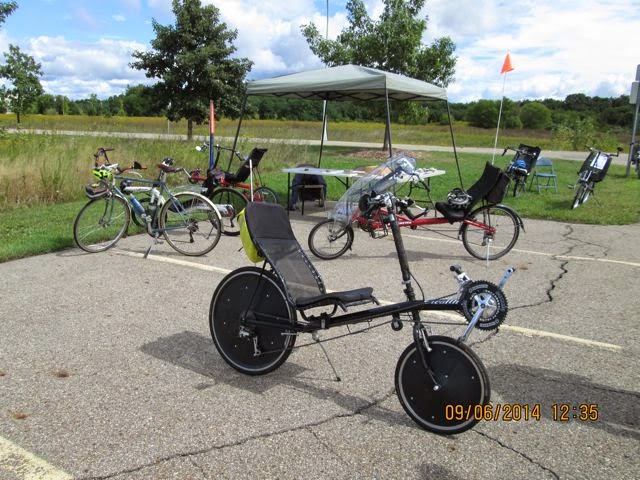 The annual Michigan Recumbent Rally - West, organized by Paul Pancella, took place Saturday, Sept. 6, in the parking lot outside the College of Engineering building on the Western Michigan University Parkview Campus in Kalamazoo.
There was a good turnout of recumbent two- and three-wheelers, some of them for sale, and some non-recumbent cyclists who took advantage of the opportunity to try some laid-back cycles. 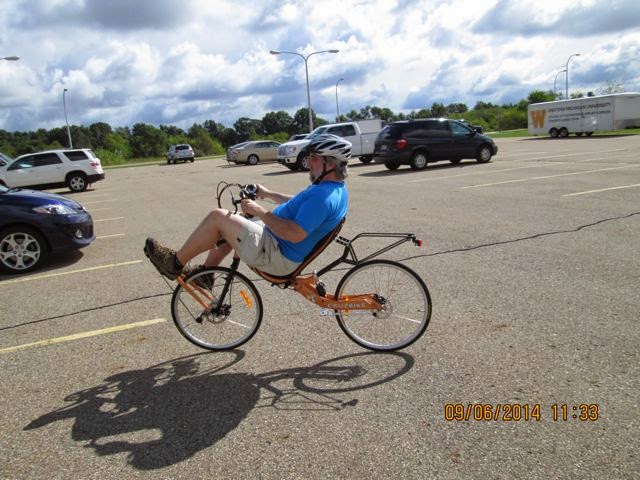 David Middleton of Kalamazoo has been at the past few rallies with a mountain bike converted into a front-wheel-drive recumbent with use of a Cruzbike conversion kit.  He's now taken the financial plunge and bought a Cruzbike Quest, which folds. Wheels are 26 in/559mm and gearing is a SRAM Dual Drive, which combines a 3-speed hub with nine deraileur sprockets.  Learning to ride a FWD with moving bottom bracket takes patience. 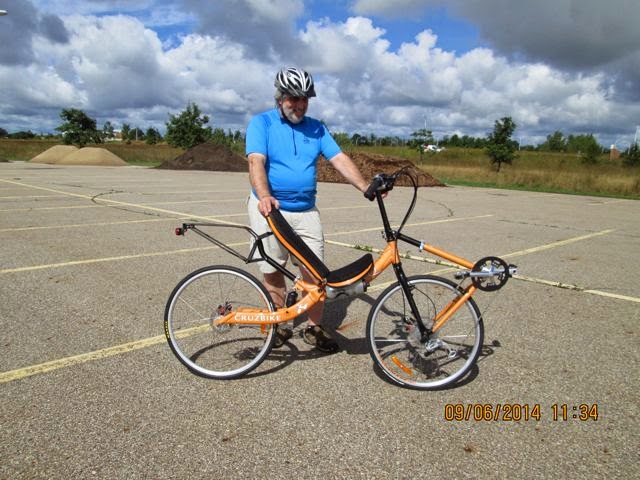 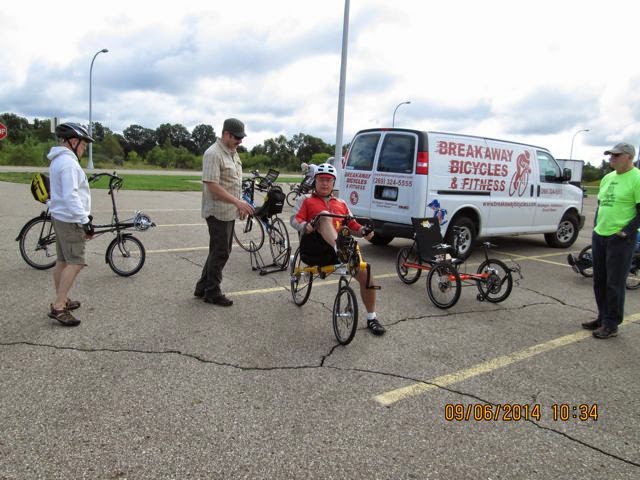 Gabe Lagina (tan shirt, gray cap) from Breakaway Bicycles and Fitness in Portage came with two TerraTrike three-wheelers and two Bacchetta two-wheelers. In addition to those brands, it also sells Sun recumbents – and lots of upright bikes. There's also Breakaway stores in Grand Haven and Muskegon. The orange TerraTrike Rambler by the van's rear wheel now belongs to the editor of this blog. 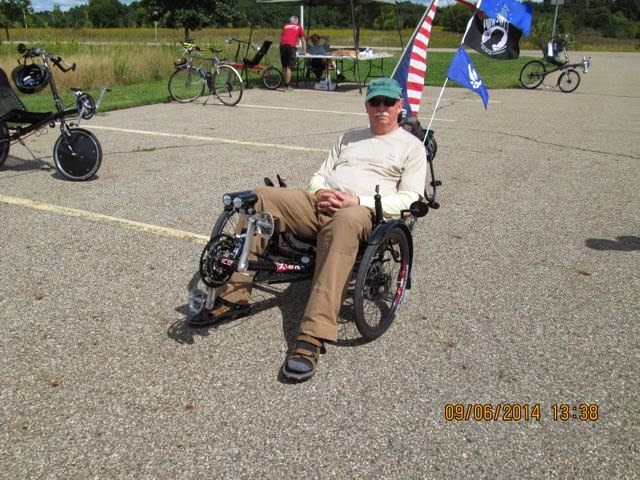 Richard Tool came from Dayton, Ohio, with his ICE Sprint FS. All three wheels are suspended, it folds, has 30 speeds (3x10 gearing) and weighs 43 pounds. He bought it in February 2014 due to equilibrium problems and is his first recumbent. He said it's only slow going up hills. The next day he rode it in the nearby Vineyard Classic Bicycle Tour, which starts and ends in Paw Paw. 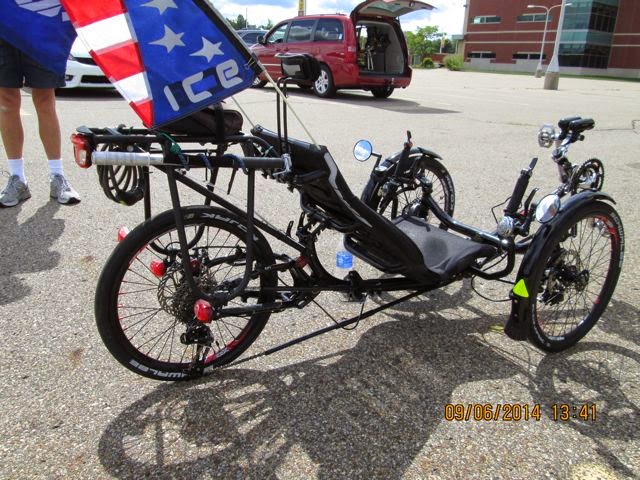 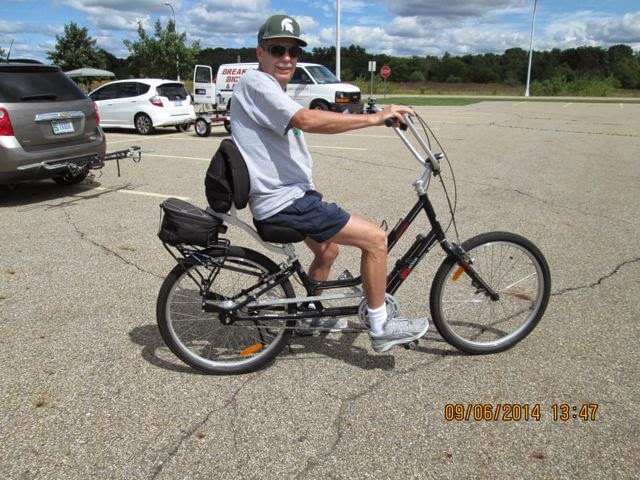 Andy Knight of Cooper Township (Parchment area) brought his Day 6 Journey, which has a Shimano Nexus 7-speed hub gear.  Last year, he rode it 41 miles to South Haven. Day 6, which apparently is having business problems, is based in New Hudson in southeastern Michigan. 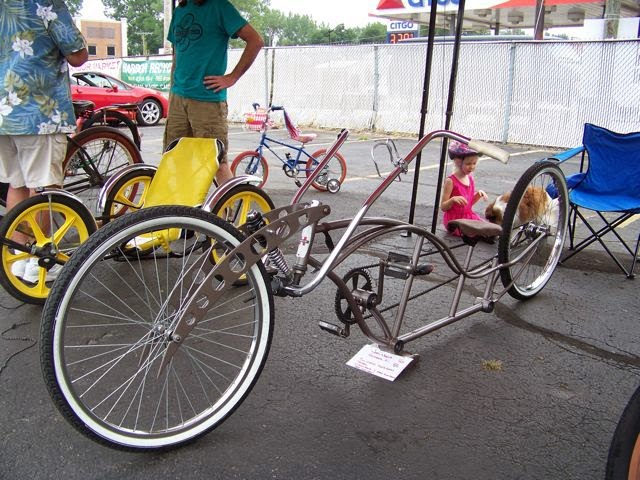 This bike was not at the recumbent rally, but I (Mike E.) thinks it's cool, hence the photo here. Builder/owner Joel Wiggins of Kalkaska brought it to the fourth annual Cycle-Re-Cycle bicycle show and ride Aug. 23 in Benton Harbor. (C-R-C is a all-volunteer non-profit bicycle shop.) Joel built the bike using an old Huffy tandem frame. It's what's called a burrito bike, described as long and low. Add a backrest and more than one gear and it becomes a recumbent.
Posted by mike at 11:48 PM No comments: 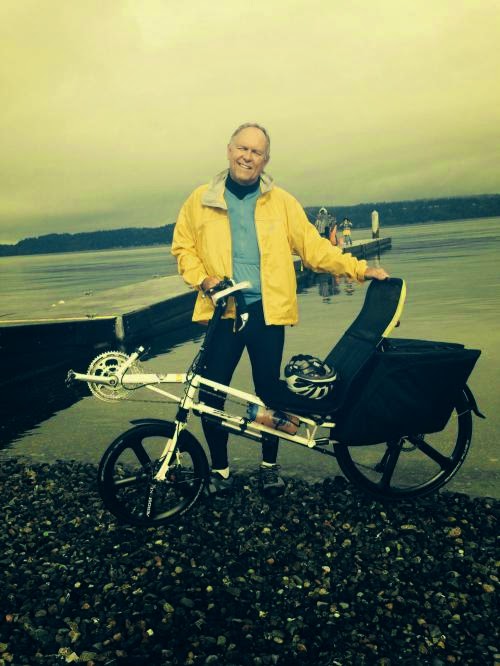 Wally Kiehler started his journey June 15 by dipping the rear wheel of his Lightning P-38 in the Pacific Ocean at Everett, Wash.

More than 1 million pedal revolutions is what my fellow riders and I figured we pedaled when we rode coast to coast (C2C) from Seattle to Boston with Cycle America this summer (9 weeks / 4,200 miles).
We got this number by using the average number of hours on our bikes each day and our average cadence each day.
Each day we cycled 60 to 100 miles.  My average cadence is 60.  Almost every day we climbed hills.  Some were steep hills for me.  A few times I decided to walk.  Some times I just couldn't pedal up 15 percent hills for a long distance.  A few times I decided to walk because I could only pedal 4 mph and it was much easier to walk 3 mph.
(Editor's note: The journey started June 15 in Everett, Wash., and ended 4,244 miles later on Aug. 16 in Gloucester, Mass.)
When we crossed through Michigan, I decided to exchange my heavy Lightning P-38 with both panniers for my lighter/more aero carbon fiber M5 with small cargo bag.  I found this increased my average speed by 15 percent.
None of the riders on their 15-to-20-pound  diamond frame bikes had to walk any hills.  Many of their bikes only had two chainrings.  They were at an advantage at climbing – but a disadvantage in comfort.  I noticed some of the male riders using butt creams in the locker room.  I heard that it helps relieve their butt sores.
We started in the state of Washington in June.  The weather, as expected, was terrible.  Cold and rainy.  And hilly.  We had a few major climbs that required rain jackets and gloves.
I remember one 16-mile climb.  I was in my lowest gear all the way up.  Then we rode through the most scenic areas out west such as Yellowstone, Tetons, the Badlands, Crazy Horse and Mount Rushmore.
As we crossed the middle of the country we were blessed with moderate weather because it usually is 90 to 100 degrees there during the days in July.  As we rode to the eastern part of our tour we visited Niagara Falls and Lake Pacid.
For more descriptive entries (including photos) you can read my daily journal at:
www.crazyguyonabike.com/, then click on "journals," then search for "wallyk." (www.crazyguyonabike.com/wallyk also works.)
This adventure was a long range goal of mine for several years.  And now that it is over, I don't have another bike adventure to look forward to.  Nine weeks was a very long time to be on the road and away from home.  I think I will stay with much shorter touring adventures. 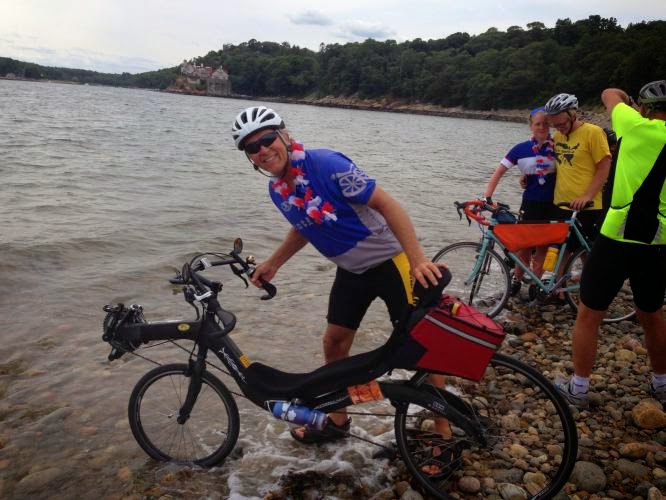 Wally ended his journey Aug. 16 by dipping the front wheel of his carbon fiber M5  in the Atlantic Ocean at Gloucester, Mass.

It has been five days since this long tour ended. Five days without riding. Just trying to catch up on chores around my house. Lots of mail to open. My bike arrived byFedEx yesterday. I put it together today. I don't feel like riding this week, since I rode almost everyday for nine weeks.
As of today I rode 5,200 miles since last winter. My normal year is only 2,000 miles. This coast-2-coast tour has been my long range biking goal for several years.
I knew that the tour would take over two months and that I would be retired when I did it. Another bike club member, Bob Krzewinski of Ypsilanti, said he wanted to join me. At first we discussed riding either "supported" or "self supported." Each method has its advantages and disadvantages.
We eventually agreed that "supported" was the best fit for us. We chose Cycle America because it was the least expensive, it toured the preferred northern route, and it started in June. We made the right decision.
Cycle America owner, Greg, does an amazing job on this tour. He was on the tour and in control of everything for all nine weeks. He has an experienced staff of 10 to 12 that knows how to make everything go smoothly. We crossed the country from town to town like an experienced traveling circus. Three passenger vans pulling three trailers, one router car, and around 50 riders each week. Cycle America has been running this northern route for 20 years. They know what destinations are worth riding to, the best roads and bike paths to take, and what towns to spend our Sundays off.
I rode a recumbent. So I was challenged almost every day with hills. Some were steep enough that I had to walk them. But all were fun to come down on. A few downhills were up to 10 miles long and fast.
Thirty-four riders started the coast-2-coast, 30 finished. Bob K had to drop out at the end of week No. 2 because of health issues. He since has had surgery and is doing fine. Around 15 riders rode every mile cross-country. I missed 1.5 days.
It was amazing to experience the bond between the 30 C2C riders. We all had the same goal. We got to know each other quite well. We rode from town to town in small groups determined by each biker's speed. Some of us tent camped. Some slept inside. We ate our breakfasts and dinners together. I already miss seeing and riding with the riders.
I would highly recommend Cycle America for your C2C tour. They also offer one-week tours that I'm sure would be just as fun.
But I would not recommend doing the hillier tours on a recumbent unless you can climb hills a lot easier than I can. I ended up changing recumbents when we crossed through Michigan to my lighter/faster recumbent. And that helped me a lot.