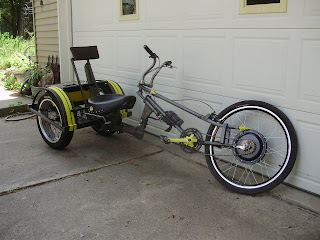 THE KRAIT, built by Dave "Big Mo" Moeller has front wheel drive, with power from pedals and the electric hub motor. (Photos by Dave Moeller)

Here's the latest from Dave Moeller of Linden. Several of his previous projects can be seen on this blog.
The Krait has front wheel drive, powered by pedals and an electric hub motor. The toolbox holds four gel acid batteries providing 48 volts.
The frame comes apart behind the steering post and is held in place by two front wheel skewers running through a sleeve joint. The only connection between the halves is the battery cable. This allows for easier transport but is intended to allow modifications without having to do a total rebuild Possible conversions could be into a two wheeler or with different front ends. 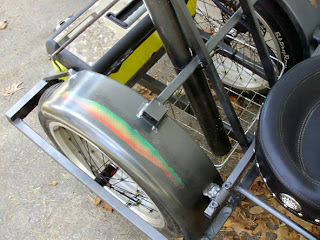 The dual disc rear brakes are activated by a lever alongside the right side of the seat.
The fenders were purchased at Tractor Supply Co., sold as replacements for their trailers, and the seat is a motorcycle mechanic stool bought at Harbor Freight Tools. The rear wheels are from Schwinn Stingrays. 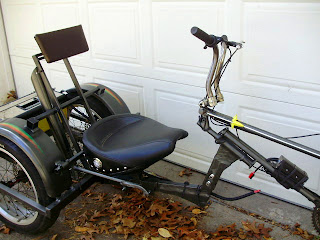 Dave started building the trike after the Ann Arbor Classic Bicycle Show April 25 and finished it in time for its public debut at a bicycle show in Owosso in August, where he rode it 10 miles on a trail ride.
"I decided to do something more sedentary for the winter, so I bought a couple of airbrushes and all the stuff," Dave wrote in an e-mail. "I haven't touched an airbrush in 30 years plus. My first project was the toolbox and fenders for thr Krait."
He's also been painting on muslin, with the intent of doing some painted quilts. (Dave and his wife are quilters, she does the
piecing and he does the quilting.) An example of his air brushing is shown below. 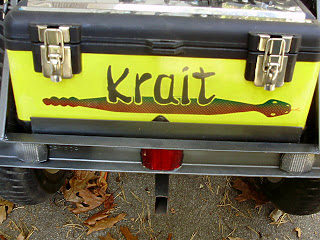 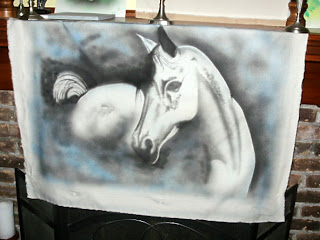 Morticia, from Terry Gerweck's "dark side" 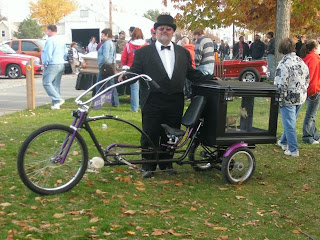 TERRY GERWECK and Morticia at the Oct. 30, 2010, Tombstone Derby in Elmore, Ohio. (All photos by Terry, except for this one, obviously.) 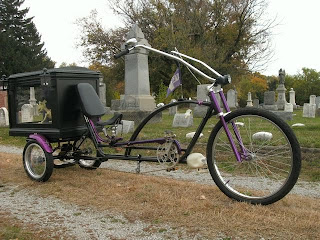 The finished Morticia. Notice the background.

2010 has been a very active building year for me. I finished my city 'bent early in the year; a successful build in
that it meets all the goals I intended. (See "Terry Gerweck's new recumbent" article below from June 24, 2010)
After the Waterford HPV rally in June, where I was re-introduced to my "dark side" roots, I set out to build an idea that
had fermented in my brain for far too long. Beyond my need for human powered speed, there is always the desire for human powered fun and Morticia is the incarnation of my adolescent wish to own a hearse.
Morticia's beginnings were quite humble. An old adult trike, cut in half and stretched. Two Orange County Choppers bicycles for the rear rims, tires, fenders and a few miscellaneous parts. (The 16-inch rims were laced to the original trike hubs, with some help at Jack's Bicycles in Monroe.) Some muffler tubing and conduit, bits and pieces from a child hauling bike trailer, a futon, and what ever else was lurking in my garage that seemed to fit. Fire up the welder, grind judiciously, shake a couple cans of paint at it and you've got a bike. (The two curved tubes running to the head tube originally formed the canopy supports on the bike trailer; tubing from the futon furnished the "truck bed.") 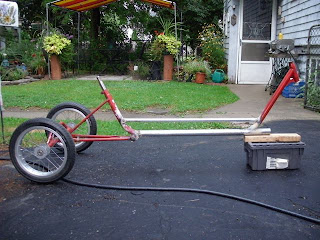 I found a couple pictures of horse-drawn hearses and scaled them down to trike size. The hearse coach body was made from quarter-inch plywood and wood moldings. Added details like lanterns came from the garden department, trim pieces from auto and motorcycle sources, a purple funeral flag (from an undisclosed source,) the biggest ape hanger handlebars from the local bike shop and miscellaneous skulls and other semi-scary stuff from the dollar store.
I guess my favorite piece of fabrication is the brake disc. It would be an OK piece if I had used a lathe (I don't have one), but for making it in a vise and a drill press with a hack saw and a couple of files, I'm really proud of it. I'd be even prouder if it worked worth a damn. 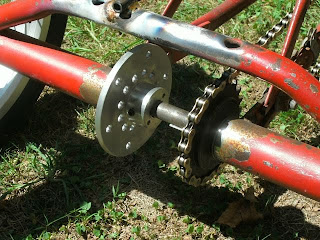 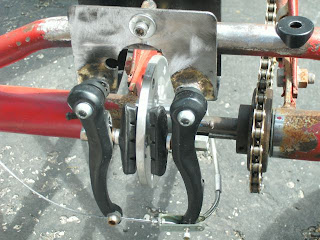 The brake disc hub came from a piece of aluminum bar and a chunk of aluminum plate was used for the disc itself. The axle is a single full width bar. The drive wheel bolts to one end and the other wheel freewheels on a set of bearings. The whole axle slides out of the frame and the brake disc, drive cog (and eventually, maybe a pulley for an electric drive) slide on to it in the middle of the axle frame work.
But the caliper brakes with stock bicycle brake pads don't develop a great deal of braking power. The 3,500 mm (137.8 inches) brake cable probably doesn't help much either. The brake cable was a stock item, also from Jack's, and is the longest stock cable I've ever found.
Morticia's public debut came Oct. 30 at the Tombstone Derby in Elmore, Ohio, southeast of Toledo. The mayor of Elmore welcomed Morticia and me, thanked me for coming out and sort of suggested he wouldn't be opposed to a human powered addition to his festival, so there could be a freak bike event as part of next year's Tombstone Derby.
Elmore is on the west end of the North Coast Inland Trail System (at least a 69-mile chunk of it, which is prime for a ride. The Tombstone Derby includes casket races and a parade. There's plenty of room and semi-demented spectators, perfect for a
pseudo bike show all contained within a loosely organized festival.
Opportunity abounds to do it right.
Morticia isn't done yet, there are so many details that can be added. I guess she'll be finished when I move on to the next build. 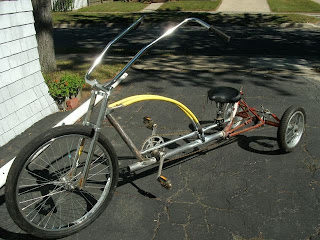 Almost ready for painting. The two curved tubes running to the head tube originally formed the canopy supports on a bicycle trailer for transporting children. 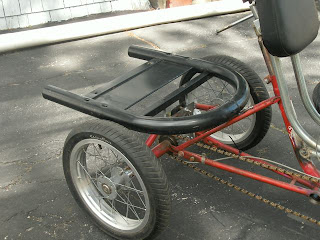