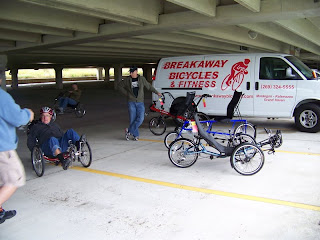 JOHN MATHIESON (standing at rear) of Breakaway Bicycles and Fitness brought a Sun EZ-1 and T3-AX trike and a Bacchetta Giro 20.

Rain during a cycle event usually means either cancellation or being miserable.
But rain all day during the Michigan Recumbent Rally - West Saturday, Sept. 11, at the Western Michigan University Parkview Campus wasn't a problem.
The usual location is the parking lot in front of the Department of Engineering and Applied Sciences building. The building and parking lot are adjacent to a large parking garage, which is almost empty on a Saturday, so the lower level provided a nice, dry location for test rides and talking.
Unfortunately, the rain likely kept some people away who were unaware of the "indoor" location.
Among those attending were representatives of two west Michigan bicycle shops who brought several recumbents for people to test ride and hopefully buy.
John Mathieson of Breakaway Bicycles and Fitness brought a Sun EZ-1 compact long wheelbase, a Sun T3-AX two-wheels-in-front tricycle and a Bacchetta Giro 20 short wheelbase with 20-inch front wheel. Breakaway has stores in Portage, where John is based (269-324-5555), Muskegon and Grand Haven. 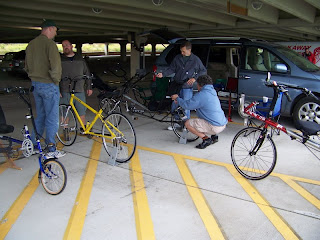 NATE SCHMOEKEL, of Village Bike & Fitness, a Rans dealer, shown here adjusting the seat on a Stratus XP for a test rider, also brought a Zenetik, V3 and F5. 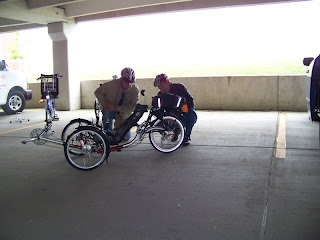 DAVE MIDDLETON (left) of Kalamazoo and Joe McCormick of Troy discuss Joe's ICE trike, which has fold-under rear suspension. It's Joe's third trike and as of Sept. 11 he had ridden it about 8,700 miles in the four years he has owned it. 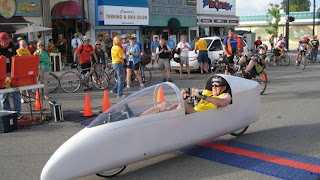 At least 13 recumbent riders were among the 325 cyclists competing in the Avita Water Black Bear Bicycle Tour July 25, 2010, with laid-back racers finishing first and third overall.
The 100-mile ride runs from Grayling to Oscoda, in conjunction with the Weyerhaeuser Au Sable Canoe Marathon. The pedalers started 11 hours after the paddlers, with the goal of getting to Oscoda before the first canoe arrives, which didn't happen this year.
Dave Johnson, 53, of Olivet, in his Rick Wianecki-built Great White streamliner, finished first in a time of 3 hours, 42 minutes and 41 seconds, for an average speed of 26.9 mph. This was the fourth time Dave has ridden in the Black Bear and he's finished first all four times. The first time, which he recalls was in 2004, he arrived in Oscoda ahead of the canoes.
Second was Alex Vanais, 31, of LeRoy on an upright road bike in 3:54.11, an average of 25.6 mph. Third was Bill Hannon, 67, of Springfield, Ohio, in/on his Lightning F-40 recumbent with full fairing (solid nose and stretch fabric sides) at 3:56, an average of 25.4 mph. 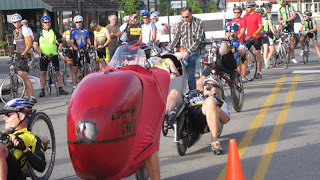 BILL HANNON of Springfield, Ohio, in his Lightning F-40 (red bike) waits for the start of the Black Bear. He finished third overall in a time of 3 hours and 56 minutes (25.4 mph). 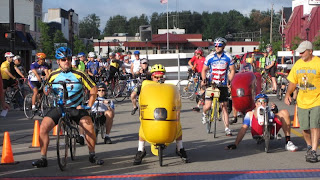 THE RECUMBENT RACERS and a few others await their 8:18 a.m. start in Grayling. In the yellow Lightning F-40 is Wally Kiehler, who finished in 4 hours and 48 minutes (20.8 mph.)

Here's Dave Johnson's account of his ride (slightly edited by Mike Eliasohn):
While hearing my name called for the next wave of riders, I was busy cutting the bottom of the fairing to get more front wheel clearance. I had slid the front wheel back in the fork so handling was better when turning. As old as Great White is, the tires still seem to find a way to rub on the fairing at the worst possible time.
When the gun sounded, I was hardly ready to ride. Water hoses not clipped to the front of my shirt. ear plugs not in, food bag not in place, and shoe strapping not tight. I spent too much time talking to other riders instead of preparing for my ride. The first few miles were slow while I was getting situated, warming up, and just watching the rough road.
I did have my laminated map folded correct and clipped to the handlebar, determined to stay on course for the whole ride. Then at precisely 34 miles and Red Oak Road, I turned south, just what my map shows but not what the corner marshals is insisting, that I go straight. My map showed south on Red Oak! Should I follow the map or take the marshal's advice and go
straight? I think it over and finally coast to a stop, get out, turn the bike around, climb back in, and continue straight on Miller
Road. I now know that routes change frequently due to road conditions. I should have used to map from the ride packet, rather than the one I got from the website.
At this point, I had not caught the pace truck and was just slowly passing other bikes. Finally at the edge of McKinley, I was behind the pace truck but only for a few miles... as I struggled with Heartbreak Hill. The approach was a gradual incline as I pedaled slower and slower -- 30, 25, 20, 15, 10, finally 5 mph.
My lowest gear was getting jumpy, better not break anything, needed to dismount and walk the 66-pound rig up the hill. With the streamliner, I find that the aerodynamic advantage disappears below 20 mph. Normally when going up a hill, at that time you wish you had a lightweight upright bike.
So finally after walking to the top of Heartbreak, at the corner, I get in and try to start. Oops, not happening. I tip over, half in the ditch. Bad timing as several upright riders easily roll by, saying, "Augh, that's too bad". I say to myself, "Nice job," as I rolled in the sand and gravel with sweaty skin. After unclipping and crawling out, I manage to get Great White upright
and pointed in the correct direction. Several guys at the corner helped me get rolling and on my way.
I easily make my way to the pace truck and try to gain some distance on the uprights before "Block and Tackle Hill". The rolling hills were a blast, flying along now, hitting my top speed for the day at 53 mph.
I knew the large hill would soon be here, so I kept my speed up as much as possible. Finally a large downhill began and I cranked it up; it's the AuSable bridge! I remember hitting 44 mph, cranking hard wanting to roll to the top. Still had to gear down, but did not need a block and tackle to reach the top. Along River Road, just before Monument State Park, my speed was easily increasing to about 40 mph because of a gradual downhill. Due to the many trucks, cars, campers, and confusion I had to back off to avoid risking a collision. Now rolling at about 27 mph and 10 miles from the end, I remember to do a goo. As I'm calculate in my head that I'll be just a few minutes off my best time, the goo kicks in and I'm rolling at 30 mph. Darn, should have had the goo before the hills.
The finish arrived quickly and I slowed for the timing strips, so as to not hit the canopy with my helmet. Final time 3:42:41 first place overall.
Thanks to all the volunteers for putting on such a fun race/ride.
Posted by mike at 10:30 PM No comments: