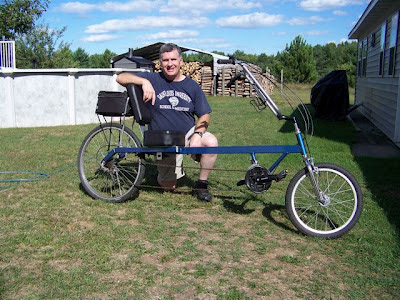 In the March 1994 MHPVA newsletter (printed on paper) was a report on a new recumbent bicycle, the Brampton Bike, being manufactured by Tom Bell Jr. in Brampton, near Gladstone. Eighteen years later, I (Mike) finally traveled to the Upper Peninsula in August 2012 and met Tom, saw the bike and found out "whatever happened to ..."
The 1994 flier called it "a high quality, high performance recumbent bicycle at a low affordable price. Perfect for commuting." The price was $549.
After building some prototypes, including this final one shown in the photos, Tom built three bikes which he sold. But he started thinking, "I don't want to build the same bike over and over again," he said, so he stopped. He then started Brampton Bike & Ski in downtown Gladstone, which remains in business, although Tom no longer owns it. He now works as a paramedic.
Tom made the bikes in his garage. The only things he didn't do himself were the paint and upholstery. The main frame tube is 1x2-inch mild steel; the rear stays are 1x1-1/2; and the cross tubes connecting the stays are 1x1. Tom bought parts from J&B Importers/Sun Bicycles. The three bikes sold used Shimano Tourney components, had triple chainrings and seven-speed freewheels.  The bike shown here has some different components than on the production bikes, including the handlebars from Sun/J&B. Tom bent the handlebars on the production bikes from galvanized tubing.
The wheels are 26-inch in the rear, 20-inch in the front, with aluminum rims. Three frame sizes were to be available: 63, 66 and 69-inch wheelbase. Weight was about 45 pounds. A single quick release allowed easy adjustment of the seat position.
The Brampton Bike is obviously simple, but Tom's worksmanship is very nice. It makes me wonder if a small welding/machine/fabricating shop when its normal business is slow could produce similar bikes. 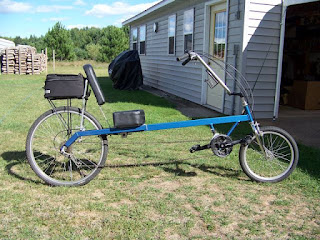 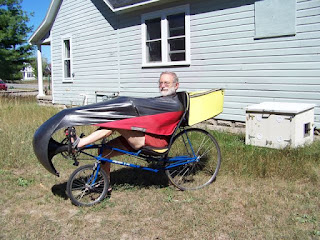 On my way to the Upper Peninsula, I stopped in Empire to see Reuben Chapman. Back in 1982, Reuben was living in Ann Arbor and publishing Getting There by Bicycle 10 times a year. The October 1982 issue had an article by Reuben about the first recumbent gathering in Michigan, on July 11 of that year, organized by me and Terry Gerweck in conjunction with the River Raisin Tour in the Monroe area. Six recumbents were there, which led to the creation of the Michigan Human Powered Vehicle Association and the annual Michigan HPV Rally. Reuben and his wife, Mary Ann, have lived in Empire, west of Traverse City, since 1999. He still rides his Lightning, shown here, and other bikes. 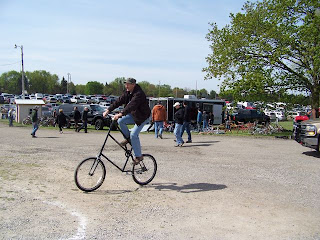 In the bicycle world, there are low racers and low riders – and tall bikes. At the Ann Arbor Classic Bicycle Show April 29, 2012, Joseph VanLoozen was showing and promoting his Very Big Bike, which he is manufacturing. A 7-speed bike costs $1,395; frame sets are $750. The website is www.verybigbike.com, which includes a video of how one gets on the thing to get started. On Sept. 15, VanLoozen and his brother, Pat, who make up VanLoozen Brothers Bicycles in Levering (south of Mackinaw City), each rode one of their bikes 31 miles in the Tour de Troit in Detroit. The frames are manufactured by BSM Technologies in Romulus, powder coated and then assembled by the brothers. Joseph built his first tall bike in 1978 in a school shop class. So far, he said, about 20 bikes have been completed and seven have been sold. A single-speed for the rental market and "twenty-niner" (mountain bike with 29-inch wheels) are now under development with BSM. 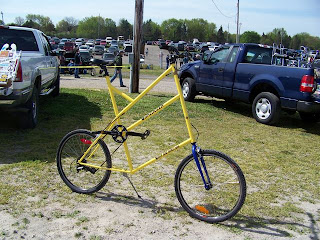 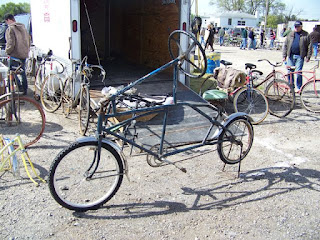 Also at the Ann Arbor Classic Bicycle show was this interesting bike owned by Brian Pikielek, owner of Bike Tech in Detroit. He told me in September the bike was built by Andy Toth, who operated Andy's Bike Shop in Melvindale from the 1940s to the mid 1990s. Brian also owns two other bikes Toth built, neither a recumbent.  The remote steering using a shaft resembles recumbents made in the 1930s in Europe, but they used a universal joint to link the shaft to the fork, rather than the bevel gear on this bike. Bike Tech, at 18401 E. Warren in Detroit, sells new and interesting/unique old bikes. In addition to the usual bicycle repairs, it also does frame repairs (that is, brazing). The website is www.biketech.us and the phone number is 313-884-2453. 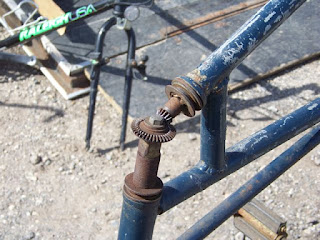 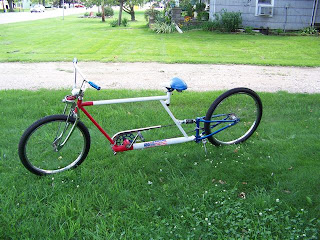 This interesting stretch cruiser is owned by Jim Baney, owner of Jim's Vintage Bicycles, 6656 S. M-139, Berrien Springs, ph: 269-408-0430. He said he bought it at the Ann Arbor Classic Bicycle Show, but didn't know anything about the builder. Notice the use of a rear swing arm, presumably from a mountain bike. Jim sells and restores vintage bicycles, as well as more modern used bikes.
Posted by mike at 2:12 PM No comments: