Note: Complete results and more photos can be seen at www.recumbents.com, then under "recumbent racing," click on "HPRA racing results and pictures."

By MIKE ELIASOHN, MHPVA president (photos by the author unless otherwise noted)

The 31st annual Michigan HPV Rally drew an excellent turnout of 42 competitors, coming from as far as Iowa, Tennessee, North Carolina and Toronto, and ranging in age from 8 to 78.
It also was notable for the presence of three Cruzbikes (front wheel drive, moving bottom bracket and fast!) and five velomobiles (for the unknowing, fully faired three-wheelers intended for street use, as well as competition).
The rally was scheduled June 13 and 14, but with rain forecast for Sunday, we moved the flying start sprints through the 200-foot timing trap (the top speed event) from Sunday morning to late Saturday afternoon.  Also that day were the two one-hour time trials, hill climb/coast down and the urban transportation contest.

Amanda and Dan Zolyniak of Toronto competed at the 2014 rally with the streamliner they built.  Since then, they built this carbon fiber low racer, on which Amanda won the women's class.  (There was only one other competitor, but Amanda likely would have won had there been several competitors.) Her speed in the flying start sprint was 32.78 mph.  (Dave Mendrea photo)

The rain came on Sunday, so the scheduled two road races and tricycle race were not conducted. At about 9 a.m., we conducted the awards ceremony and everyone then went home. It was the first time in the 31 years of the rally that a full-day's events were washed out.
Cash prizes were presented to the top three in each class except for the stock class, which because of the large number of competitors, the top five took home some money. Here's the top three or five:
Streamliner (5 entries):  1) Dan Zolyniak, Toronto, Ont., Mistral built by him and his wife, Amanda, 225 points, 2 -tie) Dennis Grelk, Donnellson, Iowa, Barracuda built by Warren Beauchamp, and Calvin Moes, University of Toronto Vortex, 220.
Streetliner (6 entries):  1) Michael Hinterseher, Farmington Hills, Milan SL velomobile, 230; 2) Wally Kiehler, Grosse Point Woods, Lightning F-40 (the only non-velomobile in the class), 205; 3) Bruce Gordon, Buchanan, Greenspeed Glyde, 189. 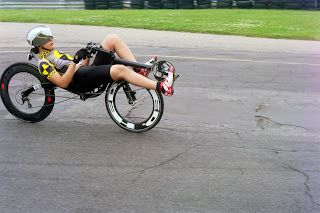 Florian Kowalik, 16, of Deerfield, Ill., in his first year competing against adults, finished a close second in the stock class on his M5 M-Racer. In the flying start sprint, he went 38.96 mph. 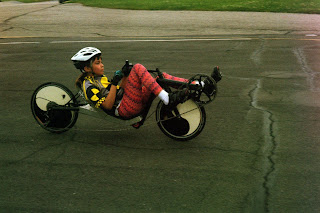 Genevieve Kowalik, 10, on her Rick Gritters-built low racer bested three of her siblings and one non-Kowalik to win the junior class. Her speed in the flying start sprint, 29.45 mph.

Discussion about future of MHPVA
Following the dinner break, the scheduled informal meeting was held to discuss the future of the Michigan HPV Association and the Michigan HPV Rally.
I (Mike E.) started  by saying I, as president, and Bill Frey, as treasurer, accepted our positions at the annual meeting in February with reluctance. We both held those jobs previously for many years and now in our early 70s, feel it's time for others to take over.
I also mentioned  that it's possible for the Michigan HPV Rally to continue without the MHPVA, provided at least one person is willing to be the organizer. All of the other Human Powered Race - America events are organized by individuals, not by groups similar to the MHPVA. 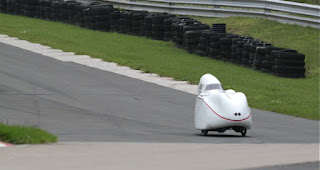 Michael Hinterseher of Farmington Hills in his Milan SL won the streetliner class despite finishing third in the one-hour time trial after crashing late in the event.  The rear inner tube blew, he lost control and the Milan flipped onto its right side. "I was skidding quite a while on my side," he said, which left "skid marks" on the fairing. A new inner tube was installed and Michael won the hill climb, coast-down and flying start sprint at 40.11 mph. (Dave Mendrea photo taken before the crash)

Some comment or  answers to questions:  Bill Frey: The MHPVA is incorporated, which requires a $20 annual payment to the state. If the MHPVA dissolves, the money in the treasury must be donated to non-profit organizations. It cannot be divided among the members. However, it isn't necessary for the MHPVA to remain a non-profit organization to continue. We pay $600 over two days to the Waterford Hills organization for use of the track.
Garrie Hill: Insurance for the rally costs us $53 per day. There have been zero claims from any of the HPRA events. The cost per event will increase if there are fewer events to insure. The individuals who organize the other HPRA events are usually reimbursed for their expenses from entry fees after the event is over.
Bruce Gordon:  $10 of the rally entry fee goes to the League of Michigan Bicyclists. Part of the "problem" is many of the competitors at the rally don't come to the MHPVA annual meeting each winter and many people who come to the meeting don't participate in the rally.
Terry Gerweck:  Wait until the next annual meeting. Then if some new people don't step forward to assume leadership roles, dissolve the MHPVA.
And that likely is what we will do. If others don't want to "take over the ship," we will dissolve. If the MHPVA continues in some form, we may need to revise the bylaws.
Regardless, the consensus seemed to be the Michigan HPV Rally should continue for the foreseeable future, with or without the MHPVA.  Everyone seemed to be having such a good time that it would a shame to let the rally die. 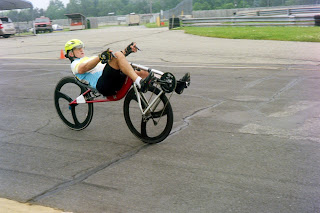 Larry Oslund came from Hendersonville, N.C., to compete on his Cruzbike Vendetta. He finished fourth in the stock class. In May, he won the men's division of Calvin's Challenge in Ohio, pedaling 264 miles in 12 hours.

One on Sunday: Tom Buzzinett of Brighton came to the MHPVA winter meeting with the Baron low racer he bought in fall 2014.  Family obligations kept him away on Saturday, but he came to the rally Sunday, hoping to compete on the Baron. Despite the rain and no competition, he did get on the track, long enough to get wet and verify that canceling Sunday's events was a wise decision. Canceled were two road races and the tricycle race. 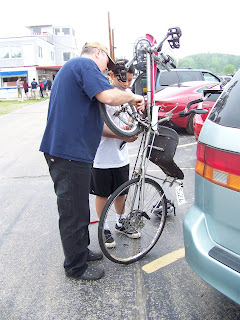 Peter Amminger and his son, Ishtey, work on Ishtey's Hypercycle. They came from Memphis, Tenn.  Peter bought the Hypercycle in the 1980s.  Ishtey, 12, finished fourth in the junior class. Hypercycles were entry-level recumbents in the early 1980s. Complete bikes sold in 1981 for $390 and frame kits for $180. (Car nuts: Notice the Jaguar F-Type in the background.) 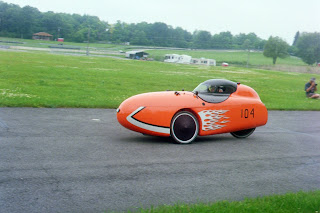