The annual human powered vehicle races took place July 25-26 at the velodrome in Northbrook, Ill.
In past years, Saturday racing was usually at Northbrook, then on Sunday, on the velodrome in Kenosha, Wis.  (A few times, it was the reverse.) However, the Kenosha oval is being repaved this year, so both days were at Northbrook.
It was hot and humid, so kudos to the racers who endured, especially those in the streamliners and velomobiles.
Complete results and photos can be seen at www.recumbents.com, then click on "recumbent racing," then "HPRA racing results and pictures." 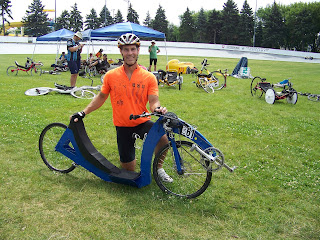 Tim Wright came all the way from Peach Tree City, Ga., with his front-wheel-drive low racer that he finished about a year ago. It was the first time he raced it. Of the 14 entries in the stock class, he finished 7th, with a best of 4th in the standing start kilometer. The frame is made of .060 inch aluminum sheet, cut to shape using a CNC water cutting jet at work. (Something you can't do if you work in a bank or law office.)  The pieces were then welded together. Wright said he should have used thicker aluminum, to reduce stress cracks. He also made the fork. 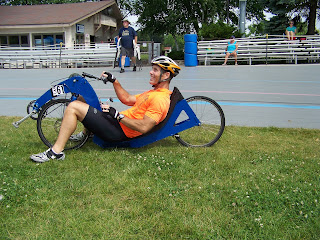 Both wheels are the larger 20-inch size (451mm).  There's a single chainring, so only seven speeds, with a crossover at the top of the front wheel. Wright said for his next bike, he's planning a more laid-back, hence more aerodynamic, seating position. 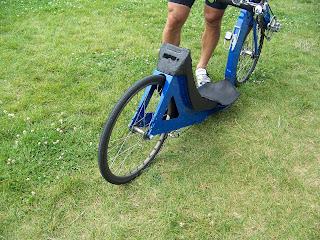 The slender rear stays can be seen in this photo.  The slot in the seat foam holds a cell phone. Wright hasn't weighed his low racer, but figures it's no more than 30 pounds. 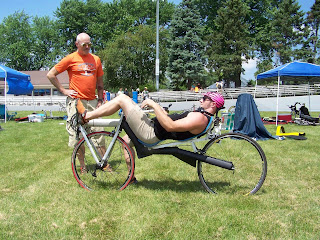 Thom (standing) and Charlie Ollinger, from Dayton, Ohio,  with their latest creation, a front-wheel-drive moving bottom bracket design  (similar to a Cruzbike). Thom did the machining and his son did the welding.  The frame is made from 6061 aluminum aero shaped tubing, intended for airplane wing struts.  Both wheels are 700c. Charlie said weight is in the low 20s.   Charlie only competed on Sunday, finishing 4th in the stock class in the standing start kilometer and 6th in the 1-hour time trial. 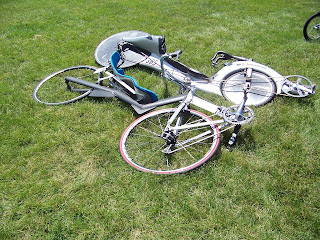 The Ollingers' bike, with its aero-shaped tubing, lies next to Mike Mowett's John Morciglio-built M1.  Mike, of St. Clair Shores and MHPVA vice president, won the stock class class over 13 other competitors. 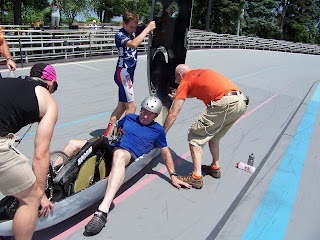 Sean Costin of Arlington Heights, Ill., immediately after winning the 100-lap race Saturday afternoon for the streamliner and streetliner classes. It was extremely hot and humid. which felt even worse for the eight  competitors in their fully enclosed vehicles. "I was ready to throw up," Sean said. "I was just exhausted." During the race, he said he was thinking, "It was these laps can't come fast enough."  Sean's son, Jonathan, 12, who competed in the junior class, holds the top half of the fairing. 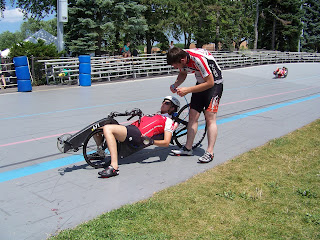 Husband Dan Zolyniak attaches the drinking tube for wife Amanda before the start of the 50-lap race Saturday afternoon.  She was the only competitor in the women's class.  The Toronto, Ontario, couple built this carbon fiber low racer and the streamliner in which Dan won that class over four other competitors.  In the 50-lap race for stock class entries, Amanda finished 10th overall, completing 43 laps at an average speed of 23.621 mph. (When the first place competitor finishes his 50th lap, all other competitors finish the laps they are on and are done.) Clifford Lofgren (shown here during the 25-lap race) and Adrian Kowalik, both age 6 and riding KMX trikes, were the youngest competitors. Clifford is the son of Eric and Charlotte Lofgren and grandson of Bruce and Linda Gordon, all of Buchanan, Mich. Clifford's father, on a Cannondale upright bike and grandfather, in his Greenspeed velomobile, also completed.  The oldest competitor, in his Mini Moby streamliner, was Rich Myers, 79,  of Xenia, Ohio. 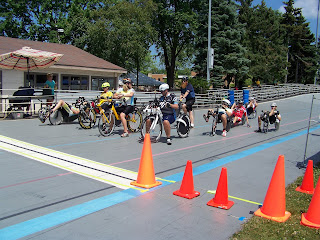 Riders get ready for the start of the 50-lap race Saturday afternoon for stock class entries.  Eric Lofgren, standing by his upright Cannondale, is eye-level with the still-standing riders on their high racers – until they get started and are almost horizontal.