Three wheels and an old crank 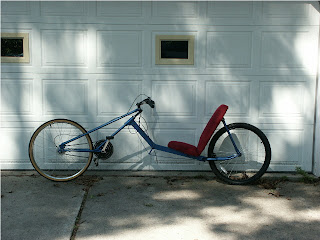 MY FIRST BIKE, THE TWO-WHEEL F'LOWROLLER

I'm psycho about trikes.
How did this mania begin? I need to make things. I have been a lifelong woodworker/wood turner, along with many other interests. My wife made 17 quilts last year and I machine quilted them for her.
I retired in December 2003, and we moved to Linden and a new purpose-built woodshop. About two years later I realized we had all the furniture we needed and was looking for a new challenge (along with the new quilting hobby). And then I saw Howard Hung's Wooden Chopper. (Go to www.bikerodnkustom.homestead.com/index or try www.mywilson.homestead.com/gallery.html and find his entry. (Editor: Or go to www.bikerodnkustom.homestead.com, scroll down to "articles," then click on "more wooden bikes.") There was no going back now.
While I began plans for my own bike, I continued to surf the Net and found Robert Horn's F'Lowroller. (There are two versions shown in the bikerodnkustom gallery). I was helpless. I bought a welder.
I made a short series of bikes and scooters to learn to weld. These have all been dismantled to hide the evidence. I then built the F'Lowroller, according to Horn's plans.
It was more of a challenge learning to ride it than building it. I soon discovered it took a lot of uumph to get it going. I should explain that by then I was about 64 years old and I'm 6-foot-5 and weigh around 280 pounds. I hadn't ridden any bike in years and now I was trying to ride my butt down the street on this thing. I learned to ride it but the physical strain soon took the fun out of riding it.
It was trike time. I bought two 20-inch and two 26-inch front forks and two 20-inch BMX wheels with 14mm axles from the local bike shop and converted the bike to a trike. It is front-wheel-drive with a seven-speed hub. Yes, there is some pedal steer but I'm a recreational rider, so it is not a problem. I did discover that during hard cornering there was a tendency to lift a rear wheel, which of course was a little disconcerting. 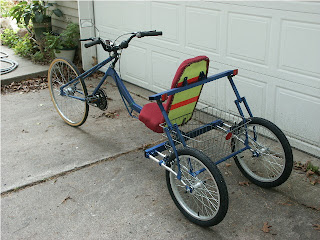 THE FIRST VERSION OF MY TRIKE, CONVERTED FROM THE TWO-WHEEL F'LOWROLLER

This led to what is the latest version, the MOEroller. I used the same forks but reconfigured them into a more flowing design, which also lowered the center of gravity by about 4 inches. Success! I also switched from foam seating to a web seat using trampoline material. 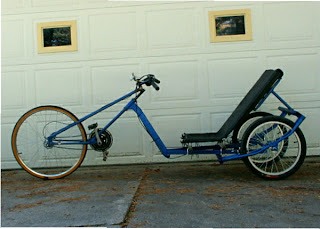 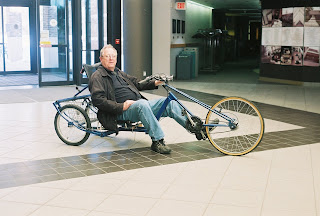 This configuration reduced pedal steer by changing the alignment of my legs in relation to the pedals. Yes, the wheel kicks your foot off the pedal in a tight turn. At high speeds you don't turn the wheel that far anyway (more than once). To make a U-turn on the street, I get up enough steam to zoom through the turn without pedaling. I feel as if I were in my Triumph TR4 roadster again!
During all this, I discovered www.atomiczombie.com. Between alterations on the F'Lowroller, I built the Delta Wolf Speed Trike. (Plans are available from atomiczombie.) After the photo was taken, I added a seven-speed hub "transmission" just behind the seat, making it a 21 speed. 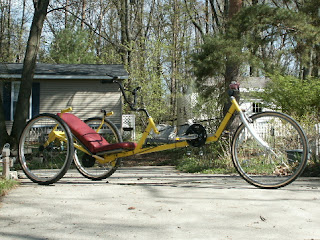 My only criticism of the Delta Wolf is that it is heavy. It currently is on the workbench and torn down. Note: Measure doorways before making the rear end. I'm narrowing it so I don't have to tip it up and rassle it through the doorway.
The transmission works well, but under heavy pedal pressure the assembly twists and throws the chain. A heavier, better designed mount should correct this. The foam and vinyl seat will be replaced by a web seat and won't be quite as laid back.All the trikes can be found on the Zombie site' gallery.
I live in Linden, about 10 miles south of Flint. You can contact me at dfmoeller@earthlink.net if I can be of any assistance.
Posted by mike at 10:21 PM No comments: