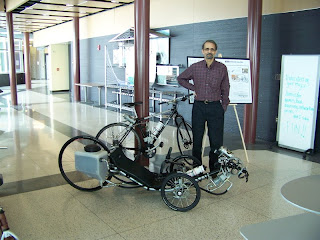 ALAMGIR CHOUDHURY, Western Michigan University Dept. of Industrial and Manufacturing Engineering associate professor and Chainless Challenge team faculty adviser, made a presentation at the MHPVA meeting on the team's efforts. The Chainless Challenge is sponsored by Parker Hannifin, a maker of motion and control systems. WMU has entered the competition for college engineering students four times. The WMU team won first overall and reliability in 2007 and first in reliability and second overall in 2008. Dr. Choudhury stands with the team's two entries - a modified Catrike and a Surly - built for the 2009 competition, which was canceled. The Chainless Challenge is/was limited to hydraulic drive systems, which are not as efficient as conventional chain drive, Choudhury said, but they can store energy to use as needed. He said for maximum efficiency, it will be necessary to use hydraulic components made specifically for bicycle drive systems, rather than the industrial components used so far. (For more information, do an Internet search of "Western Michigan University Chainless Challenge."

Approximately 25 people attended the MHPVA annual meeting Feb. 27, 2010, in the engineering building on the Western Michigan University Parkview Campus in Kalamazoo. This was the first time since the first annual meeting in 1984 that the meeting has been held farther west than Jackson and East Lansing.
Board members elected were: President, Mike Mike Mowett, St. Clair Shores; vice president, Mike Eliasohn, St. Joseph; secretary, Paul Pancella, Kalamazoo; treasurer, Bill Frey, Grosse Pointe Farms; and at-large, Don Smith, Chesterfield, and Terry Gerweck, Monroe. Terry was the only person newly elected, replacing Paul Bruneau of Portage. Not that Terry is really new; he and Mike Eliasohn organized the first two Midwest HPV Rallies in 1983 and 1984 in Monroe that led to creation of the MHPVA.
The 26th annual Michigan HPV Rally will be Saturday and Sunday, June 12-13, at the Waterford Hills sports car racing track in in Clarkston, the site since 1986.
Mike Mowett described potential events, but there wasn't time to vote on which ones will take place. So probably we will run the same events as in the past:
Saturday – One-hour time trials, hill climb/coast-down, standing start kilometer runs.
Sunday: 200-foot sprints (top speed runs), 20-lap road races (about 12.5 miles) on a course that bypasses the hill, tricycle race.
Presumably Paul Pancella will again run the urban transportation contest on Saturday. 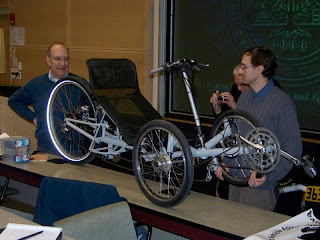 RICK WIANECKI (left) of Okemos showed his homebuilt hybrid electric-pedal tricycle, which combines a Rohloff 14-speed hub and electric drive. There's suspension on all three wheels and a fairing is under construction. At right is Mike Mowett. For more, especially on the fairing construction, go to www.recumbents.com, then click on "forums," then "velomobile 6."

Other events considered included a race with a LeMans start (riders run to their vehicles), a slow race and last man out race
"We also thought of an idea where the first five laps of the one-hour TT could be looked at as sort of a mini-time trial,"Mike wrote. "The AMB computer with the transponders can give you lap-by-lap times making it easy to get this info out. I iscussed this with Bill (Frey) on the ride over. The local upright (bicycle racing) guys who train twice a week at Waterford do a five-lap time trial every three weeks to gauge their fitness. Last year, they had more than 60 riders do this, and all together there's been something like 250 riders do this in the past eight years.
"I've compared this data to the fastest times guys like (HPV racer) Dennis Grelk (from Iowa) have done on their first five laps of their one hour. Dennis would be third overall compared to all these (upright) riders. And remember, that was only the first five laps of his longer one-hour.
" I hope to get some of these fast upright riders out (to the HPV Rally). One of them is a state Masters champion, who's been to nationals several times. I competed in their time trials twice last year. They also let me ride my recumbent around with them on another occasion." 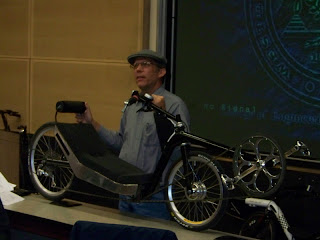 TEDD WHEELER of Reed City showed his Rick Gritters-built No. 11. (For details, see article below.) Tedd was on his way home to Reed City, north of Grand Rapids, from Florida, and had started that morning in Kentucky. He rode his new bike about 300 miles in Florida, including participating in the HPV races Feb. 20-21 in Canyon City. "Every time I get on it, I like it more," he said. Despite the crank being at the end of long boom, "I can detect no flex."

The only questions asked about the racing were:
1) Explanation of any changes in Human Powered Race - America rules for this year. Rick Wianecki and Mike M. attended the HPRA meeting and Rick explained, "There will be no class jumping allowed this year. Whatever vehicle you have can only race for HPRA points in the class that it is in. Also, if there are two separate races for say streamliner and superstreet in race No. 1 and all others in race No. 2, then a stock class bike cannot race in the streamliner/superstreet race."
There was some concern about fast stock class guys upgrading to get streamliner points and/or being a hazard to the streamliners on the course. The streamliner guys somethings can't see a lowracer on the course.
2) There will continue to be trike-only races. This is a growing field. We'll have to go over the details of the trike course at Waterford again. On the Sunday we had the race in 2008, some cars were parked in the infield too close to the course, so we changed the course at the last minute. Maybe this year, we'll have to rope parts of it off beforehand.
We will have to follow up on plans for a barbeque dinner Saturday night at the Waterford Hills lodge, which we did at the 2008 rally.
Three HPVers attended the meeting from the Chicago area, Chris Cortez, Ed Gin and Gary Toy. 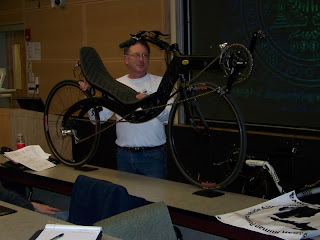 JOHN FOLTZ of Haslett showed his M5 Carbon High Racer (made in the Netherlands), which he purchased last year. Both wheels are 700c and it weighs 23-24 pounds. He went from triple chainrings to double and installed a TerraCycle tilt stem, which added a half-pound. He said it's the best handling recumbent he owns. 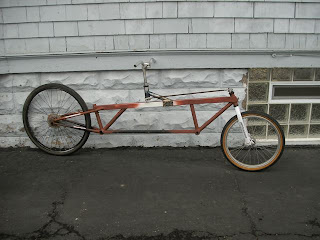 TERRY GERWECK of Monroe showed his project-in-progress. (This is a photo taken by Terry prior to the meeting, by which time he had fitted a temporary seat.) The frame includes pieces from four bicycles, a day bed and a store rack.
Posted by mike at 9:50 PM No comments: