Note:  The Michigan Human Powered Vehicle Association was formed in July 1984 and officially came to an end Sept. 30, 2016, due to a lack of active members willing to run the organization. However, for the foreseeable future, the Michigan Human Powered Vehicle Rally will continue (the 2017 rally will be the 33rd annual), as will this blog, website (www.mhpva.org) and Facebook page (www.facebook.com/mhpva).
Articles for this blog are always welcome and needed.  E-mail me at mikethebike2325@comcast.net.

Recumbent Cycle-Con, conducted by Recumbent & Tandem Rider Magazine, took place Oct. 7-9 at the Sharonville Convention Center, just north of Cincinnati.
With thoughts of finding a recumbent tricycle more suitable than my last one for getting it in and out of my apartment (which requires carrying it up and down stairs and through doorways), I set off on Friday, Oct. 7, to drive the 282 miles from St. Joseph.  I had a reservation for that night at the LivINN next to the Convention Center, with the goal of being at the show when it opened at 9 Saturday morning.
This was the fifth annual RC-C and the second at the Sharonville center. With most of the major recumbent manufacturers there, plus makers of many accessories, ranging from tires to car carrier racks, it's the ideal place for recumbent shopping (admission was $20), as well as talking to fellow enthusiasts and the manufacturers.
For instance, there was Greenspeed founder Ian Sims, all the way from Australia; Lightning founder Tim Brummer; and Randy Schlitter, co-founder of Rans Bikes, though he no longer is the owner.
Conspicuous by its absence was Grand Rapids-based TerraTrike.
There's a test riding area outside the center, but it's uphill to the turn-around, then downhill (of course) back to the building. The only level area is just outside the overhead door into/out of the building. 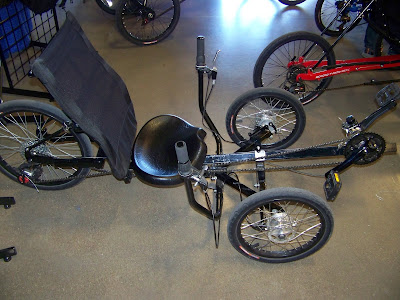 In addition to its full line of recumbent bikes and trikes, SunSeeker/J&B Importers brought this experimental leaning trike to test rider interest and whether it should be put in production.  Most bicycle dealers can order recumbents from SunSeeker.  (Parent company J&B, based in Miami, Fla., distributes bicycle parts to shops nationwide.  It also sells upright Sun bicycles and tricycles.)

Before I entered the show, I knew that if I wanted to check out all the bikes/trikes I was interested in, I couldn't spend too much time talking.  Unfortunately, I ignored my own advice, so by the time I left at 2 p.m. (in order to drive home that day), there were too many cycles I had failed to check out, much less test ride.  I'm still kicking myself (figuratively speaking). 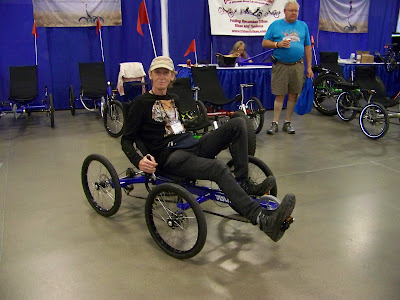 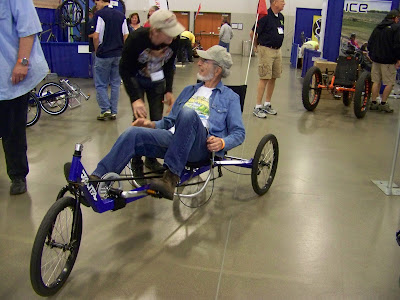 Rudy Van Es (standing) shows the delta version of the Blue Line trike to a potential customer. In the U.S., the Jouta Blue Line is being distributed by Trident Trikes of Lincolnton, N.C., which also has its own line of trikes and a two-wheel recumbent (www.tridentrikes.com).  In turn, Jouta is Trident's European distributor.

Upon entering, what was immediately noticeable was that most of the attendees were “old people” like me (age 71) and most were test riding tricycles.  That reflects what those who follow the recumbent business are saying, that the strong part of the market is tricycles, plus high end (that is, expensive) two wheelers purchased by serious cyclists.
If there were young adults at RC-C checking out recumbents because they’re cool, there weren’t many. 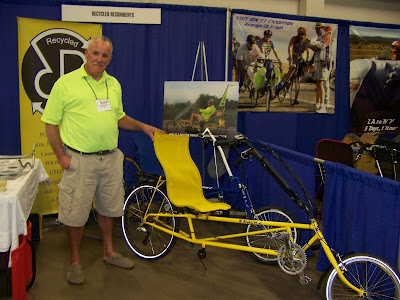 A.D. Carson operates Recycled Recumbent, building 30-50 recumbents a year in his garage in Milwaukee.  He makes the frames from parts of old lugged upright bike frames, plus new tubing.  Frames for his Mach 2 models, such as the one shown here, typically cost around $300; a frame plus seat and related parts, $450; and complete bikes for $800.  There's also a Mach 3 with dual 26-inch wheels; a complete bike is about $1,000.  Plans for building your own can be downloaded for free.  (www.recycledrecumbent.com)

I didn't do a very good job of photographing many of the interesting cycles that were there.  So, if you want to see what I missed, check out bentrideronline.com and for an almost two-hour video report, laidbackbikereport.com.
The 2017 Recumbent Cycle-Con will be Oct. 6-8 at the Greater Philadelphia Expo Center, 100 Station Ave., Oaks, PA 19456. (Note:  This is a change: Originally the 2017 event was again going to be at the Sharonville Convention Center.)  If the same format is followed next year, Friday, Oct. 6, will be open only to those in the trade (manufacturers, bicycle shop owners, etc.), while Saturday and Sunday will be open to the public.  (www.recumbentcyclecon.com) 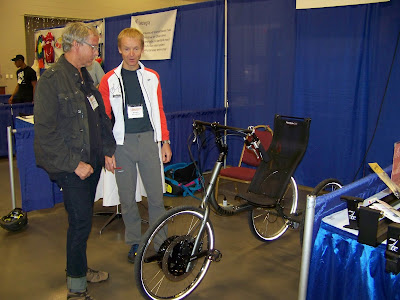 There's been a lot of interest in the recumbent world in the front-wheel-drive direct-drive KerVelo, which has 12 speeds in the front hub and no chain.  Project leader Marc Leborgne (right), came from Norway with prototype No. 4, a steel-frame leaning trike.  There's also a two-wheel version. (Notice the single-blade fork.) He's talking to former Rans Bikes owner Randy Schlitter. Marc said the next version will have an aluminum frame, weight about 35 pounds for the 3-wheeler (obviously less for the 2-wheeler) and 18 speeds (if my memory is correct). He said he hopes production will start by Christmas. Leborgne was seeking an American distributor.  Lots more information and videos at www.kervelo-bike.com. 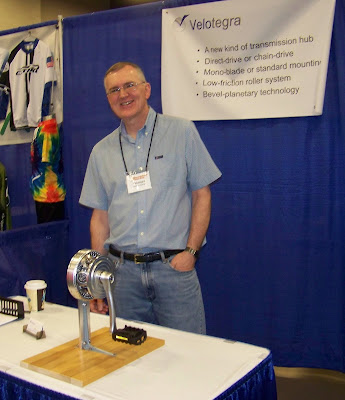 Jeremy Garnet of Montreal, Quebec, built a front-wheel-drive direct-drive recumbent in 2003, using a Schlumf Speed-Drive bottom bracket gear modified to become the front hub drive, but with only one speed.  He's been developing the concept since and at RC-C he was promoting his patented Velotegra 4-speed hub, which as shown here can be a direct-drive hub (no chain) for a FWD recumbent, or can fitted with a sprocket for conventional rear-wheel chain drive.
The four gear ratios of the prototype hub are: First: 1:1; second: 1:1.89; third, 1:2.57; and fourth, or 27, 51, 69, and 88 gear inches with a 700C wheel. For direct-drive, the hub could be designed for other ratios. For FWD, the hub can be mounted on a single- or two-blade fork. Garnet is looking for a manufacturer. (www.velotegra.com) 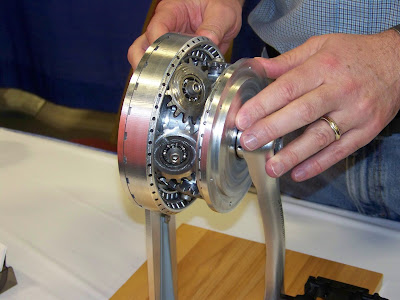 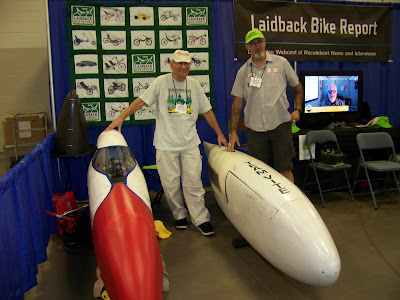 The HPV racing world was represented by Rich Myers (left) with his MinMoby built many years ago by Terry Hreno and Thom Ollinger, with the streamliner he built for Sean Costin to race at the World HP Speed Challenge at Battle Mountain, Nev. Rich and Thom live in Ohio. 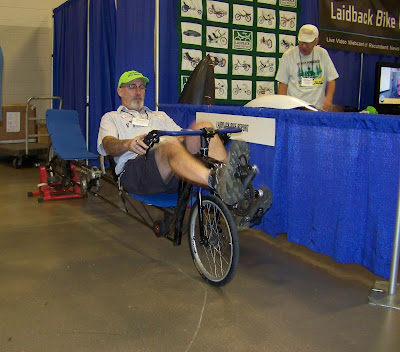 Thom also brought this recumbent tandem that he built about 10 years ago and later bought it back from the couple he built it for. 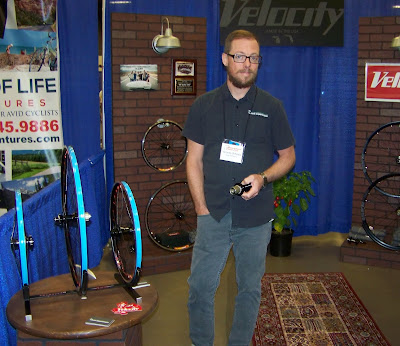 Ryan Olthouse, Wheel Department manager at Velocity in Grand Rapids, was one of two representatives of the bicycle wheel manufacturer at RC-C.  Velocity has been manufacturing its rims (from straight aluminum extrusions) in Jacksonville, Fla, and then shipping them to Grand Rapids, while wheel building for all types of bicycles, including for some recumbent manufacturers, takes place.  Ryan said rim manufacturing is being moved to Grand Rapids, so all operations will be under one roof. On the wall behind him is a photo of Eta (and the AeroVelo team), which Todd Reichert pedaled to a record 89.59 mph in September at Battle Mountain.  Velocity made the rims for Eta.
Posted by Michigan Human Powered Vehicle Association at 10:37 PM No comments: