Editor's note: Paul Pancella's electric car isn't human powered, but since he and Rick Wianecki are active members of the MHPVA and many HPVers are gearheads, I thought this article would be of interest.

Our editor, Mike Eliasohn, asked me to describe a recent non-HPV project of mine for this blog, and I am happy to oblige. I hope some of you will find this interesting, and there are some connections with the HPV world.

In early 2007 I found myself with a golden opportunity. My 1992 Honda Civic hatchback motorcar, with 192,000 miles on it, was dying. What, that doesn’t sound like a good thing? Well the only problem was in the engine, and it wasn’t worth repairing.

Still not following? For a long time now I’ve wanted a street-legal electric car. The big carmakers keep promising, but mass production is always a few years away. I had learned that many hobbyists, tired of waiting for a commercial product, have been converting gasoline burners to battery electric cars for some time, and have built up a considerable knowledge base online (with pictures! See www.evalbum.com

Since my little Honda was already a second car in my small household, the limitations of electric vehicles should not be a problem. It should be possible for us to use even less fossil fuel by replacing short trips in our Prius with an EV around town. I could even drive it to work when I had too much cargo for my recumbent, or when weather or road conditions were awful.

Turns out early 1990’s Civics are nearly optimum for this conversion. They were already very efficient, getting hybrid-like gas mileage in part because of their light weight and good aerodynamics. (This may be why two of the first HPV guys I ever met, Bryant “Bad Cat” Tucker and Bill Murphy, drove this same car; we all appreciated efficiency.) If you want to convert a gas car to electric, your range between rechargings is mainly determined by how many batteries you can stuff into it. Batteries are heavy, so you definitely want to start with a light car.

Although a 15-year-old Civic with a bad engine is nearly worthless on the open market, my car had several other features which made it an attractive platform for electric drive: Manual transmission. No air conditioning or power steering to steal drive power. (A white car in Michigan hardly ever needs air conditioning.) No power windows, door locks, etc., means relatively low load on the existing electrical system. Many were manufactured, and they last, so spare parts are plentiful. Driver’s side airbag.
Rest of the structure and systems were all sound; I knew this car’s history.

The only problems (besides convincing my wife we should spend a bunch of money on this project) were finding a place to do it and getting some people who knew about cars to help me.

It took a while, but I eventually concluded that I could do it in my own two-car garage if I had enough help. And when I got Rick Wianecki, a real craftsman and experienced car (and HPV) project guy, interested enough to help, it was time to start. That was the summer of 2008. I finished the design, ordered most of the items with long delivery times, and we started tearing my car apart in mid-July, with the deadline that it had to be moveable again before the first snowfall (so we could get the shiny Prius back in the garage). 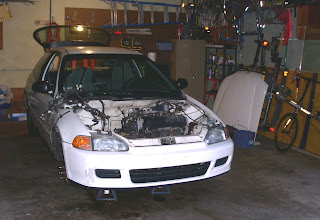 HERE IS THE CAR up on jackstands in my garage at the start of the project. Hood and front wheels are off, and we are getting ready to pull the engine.

I couldn’t have met that deadline without the help of Rick and a bunch of other guys around here. Since I know very little about cars in a practical sense, I especially needed help removing stuff correctly. The electric drive system is very simple compared to all the things you need to run an internal combustion engine. So you start by taking out a whole lot of dirty junk: engine, radiator, air intake, exhaust system, fuel tank, hoses, wires and tubes. In my case, I also removed the clutch, its pedal and hydraulics, but kept the original 5-speed transmission. 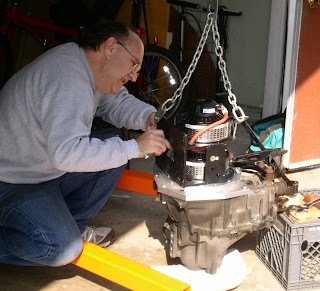 HERE'S RICK attaching the new electric motor to the old transmission. That motor sure looks small, but it should have enough power for me to keep up with city traffic, if I can give it enough volts and amps.

In common with HPVs, the severely limited power available forces one to design for efficiency. Fortunately, a modern electric motor can convert over 90% of the power stored in a battery to useful motion, whereas a similar figure for internal combustion is less than 25%. Other choices are determined by available financial resources. The most expensive part of a conversion is usually that big pile of batteries. Very useful conversions have been done by amateurs for less than $10,000. These all use lead acid batteries, the same chemistry used in ordinary car batteries. There is a lot going on in the world of storage batteries, and I could write several pages on the various options, but I’ll try to keep it brief.

Lead acid batteries have pros and cons for powering vehicles. They are the least expensive option, with a lot of built-up experience. However, they are extremely heavy and must be replaced every few years if you really use them. (In a car like mine, it takes about 30 pounds of lead acid battery for every mile of range.) Lithium-based batteries can store a lot more energy per mass, but are much more expensive and only now becoming available in large formats. In between lies nickel-metal hydride (NiMH), the same battery chemistry now used (in small quantities) in gas-electric hybrid cars. NiMH has proven longevity in cars, has almost double the storage capacity per mass that lead acid has, and "on paper" should last three times as long. It’s really hard to obtain large NiMH batteries, but when I lucked onto a source, I went for it. Instead of 1,200 pounds of batteries, I could have a 500-pound pack that theoretically would give me 35 miles of range at city-type speeds. Theoretical lifetime was triple that of good lead acid batteries, albeit at almost triple the price. 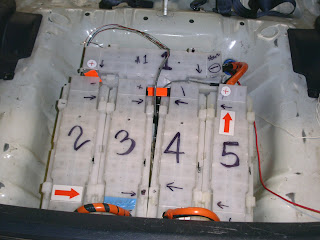 HERE IS WHAT the batteries look like. They are built as nominally 12V modules. Five of these modules, wired in series, are seen here in the spare tire well at the rear of my car. Seven more plus a partial battery were placed up front under the hood. My conversion maintains the original seats and most of the cargo space.

I also drove up the cost by specifying a non-standard motor. My electric drive system is DC, with a nominal battery voltage of 150V. Most converters don’t bother with regenerative braking because it is very difficult to do with DC systems and the most common motors, and the gains are small. However, I couldn’t bear wasting all that energy in heating the brakes, so I paid extra for a controller and motor combination that would be able to recover energy whenever the car needed to slow down (with the drive motor acting as a generator). The place where the clutch pedal used to be was a great spot for a new pedal to control regen.

With all that, the bill for parts, materials, and a few special tools came to a bit more than $15,000. Even if gas goes up to $5 per gallon, it will take a long time for the car to pay for itself in fuel saving alone (although the equivalent electricity is dirt cheap). But it was a very fun project, and I enjoy having a car that pollutes a lot less than even our Prius. One should also note that EVs generally require a lot less maintenance than gas-guzzlers. No oil changes, muffler, pipes, radiator, etc. The motor has one moving part!

If regen works, the brakes should last forever. Yes, it still uses fossil fuel, in that some of the electricity I use to charge my Civic comes from burning coal and natural gas, but the basic efficiency advantage means much less CO2 produced per mile traveled, and pollution controls at power plants are much better than on individual automobiles. 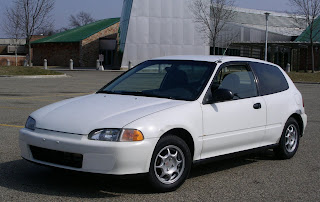 FROM THE OUTSIDE, the finished EV still looks like a normal car. Just a few aerodynamic modifications so far. Side grill openings at the front are covered; the one on the driver’s side hides the charging port. The right outside rearview mirror has been replaced by a camera and LCD screen to reduce drag. And since I don’t have to change the oil or the drain the radiator, there is a big coroplast sheet covering the bottom front half of the car.

The batteries have been a disappointment so far, however. They were not as robust as I thought, in terms of maximum power drain. This past March, in testing the range, I went over 30 miles on a charge, but that seems to have caused some damage. Most of this summer (2009) was spent replacing some modules and nursing others back to health, while learning how such damage appears and what to avoid.

Now I’m confident I can go 20 miles without damage, and probably more, (depending on speed and terrain, of course) but nowhere near the 35 miles I designed for. Even at that, there are still a lot of trips for which the EV will be useful, and they don’t all have to be round trips, since I can charge anywhere there is a standard outlet within 50 feet that has 20A service. After a 20 mile trip, I need less than 3.5 hours to recharge back to full. Since the charger tapers the current as the batteries get full, the amount of partial recharge is not a simple fraction of that time. Even an hour of charging allows me to go another 8 miles or so. 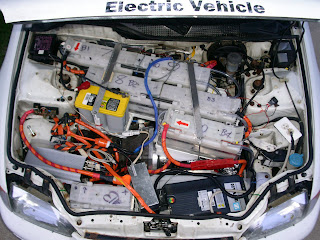 HERE IS THE VIEW under the hood, with the motor, transmission, and some of the batteries hidden from view. The long silver box at left is the controller, the electronic brain that takes input from the accelerator pedal to regulate how much current to send to the motor. The yellow top battery powers the old 12V system for lights, radio, wipers, etc. The silver box in the middle converts the 150V DC from the traction pack down to 13.5V DC to keep the yellow top charged (since there now is no alternator). The dark gray box at front right is the charger for the main battery pack, mounted on board so I can use regular AC house current to recharge anywhere. (I carry a 50 foot extension cord.) Those fat orange wires are 2/0 gauge welding cable, used to carry the main current, which can go as high as 300 amps. The “Electric Vehicle” graphic is on the front nose of the hood.