Some creations by Charles Brown (old and new)

Editor's note: Charles Brown is an ex-Michiganian. He and his wife, Blue, moved from Ann Arbpr to Clearwater, Fla., in August 1994, and on cold days like this (Jan. 17, 2015), he sends us warm thoughts.
To us old-timers, Charles is best known for the wood-frame recumbents he built, some of which are shown below. But in more recent years, he's been building frames from cheap steel, doing the welding on the patio of his first-floor apartment (there's no apartments or patios above him), using a $300 mig welder he bought at a home improvement store.
He makes sure his next-door neighbors are gone when he does the cutting, pounding, etc., inside his apartment.
Charles has taken his many years of experience in building recumbent bicycles and put them on "paper," so to speak.  Go to www.recumbents.com, as as of when this is being posted, "Charles Brown Recumbent Design" is the lead item.  It's divided into four sections:  Frame design, steering and ride, air drag and a very comprehensive summary with lots of charts.
I found in my "Charles Brown" file two cartoons he drew, but I never used, so I added those.
—Mike Eliasohn, editor 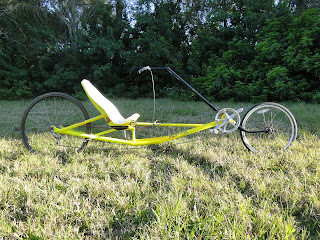 This is the most recent bicycle I've constructed, in 2014. Mike E. has been asking me for a while to write something about this bike for the blog. This one? It is not technically very innovative, just a long wheelbase bike with the seat lowered to 13" above the ground.
Other people tell me this is the best- looking bicycle I've built in a while. I agree. The triangulation is pretty good. If you look carefully, the idler is well- braced by the trusswork. I think many other people's idler mounts should be more solidly constructed - even some big-name manufacturers. More on my reasoning behind it can be found on "recumbents.com".
It's fun and comfortable to ride. I've found the air drag could be made lower by raising the feet and laying the seat back, which is where my thinking is now days. 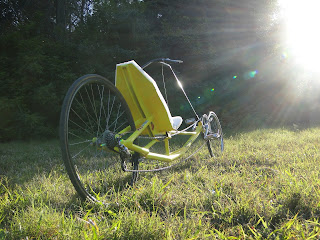 The 'Moonlight' series of bicycles
by Charles Meredith Brown


Disadvantages with traditional long wheelbase bikes, as I see it, are the air drag is too high, and there isn't enough weight on the front wheel, so it slides out more easily than it should.
I started to think, if the whole rider position were rotated back to reduce air drag, space opens up under the cranks so you can push the front wheel back. Leaning back the seat means the back wheel has to move back to make room for it, so moving both wheels backwards relative to the rider puts more weight on the front wheel. The result would have speed, sharp cornering, and the smooth long wheelbase ride.

Here are pictures of several of the bikes. Almost all used the monotube frame design. The reason for this is that most of the frames are made of wood! Wood has an Achilles' heel of being flexible in torsion, so most successful wooden recumbent frames are monotubes of large diameter, hollow construction to cure this.
I did not own a camera for a long time, so many interesting bikes are not shown here.  Several used indirect steering.  I learned good-quality ball joints purchased from Wicks Aircraft (www.wicksaircraft.com) made a hugh difference, with much less lost motion in the steering. 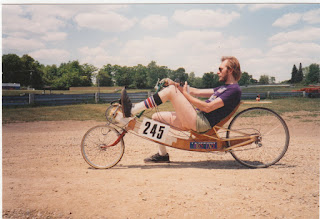 This is Charles during the last Michigan HPV Rally he competed at, in June 1994.  The frame is a box structure, with thin plywood sides and half-inch thick wood top and bottom. Except for the tapers at the ends, the "box" measures 3 inches wide and 5 inches deep. The box runs to the right side of the rear wheel  and tapers to a solid fiberglass dropout. The left side stays were made of solid white pine.  The bike weighed only 26 pounds.   It was designed for a 16-inch front wheel, but there's a 20-inch wheel in the picture to squeeze a little more speed out of it for the race, which was okay as long as Charles was careful in tight turns. 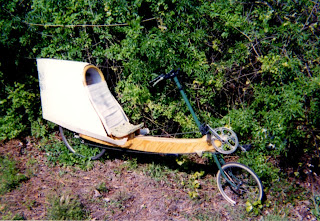 This one has a varnished wood frame and tailcone and was designed around a light, high-performance 16 x 1 front wheel produced for racing wheelchairs, using a Primo tire and Sun Metal rim.  The wheel was surprisingly durable in this use.  The hole  in the back of the seat was the storage compartment - just stuff in your things and go!  My bikes were used for commuting, so I had to be able to carry a few things.  The seat back was some stiff cloth webbing wrapped tightly in a one-piece spiral around two uprights.  This was uncomfortable at first, but slowly it shaped itself to my back and became quite nice, while still providing something stiff to press against.  The bike accelerated and climbed hills well, helped by minimizing how much the chain changed direction at the idler and a light, stiff frame. 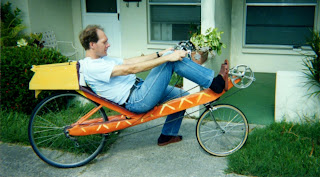 This is OLYMA  (stands for On Your Left, Mr. [Lance] Armstrong!). The front wheel is unusually far back in the picture.  Many of my bikes ended up with a series of headset holes running down the frame as I tested different steering geometries, handlebar setups, and the like. 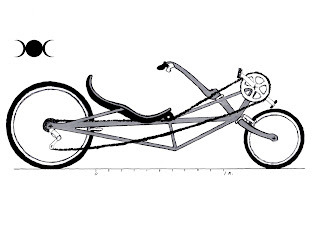 If you’re using almost any construction material other than wood, I recommend a truss structure as the design puts considerable vertical loads on the frame. This drawing shows how I’d build it if I were using metal tubes. 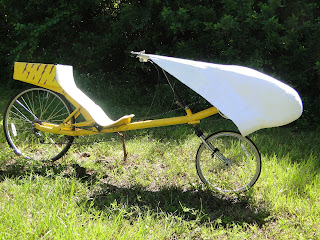 This bike's frame consists of a giant steel tube.  I had more steering tests to do on it, and this construction virtually eliminates torsional flex. 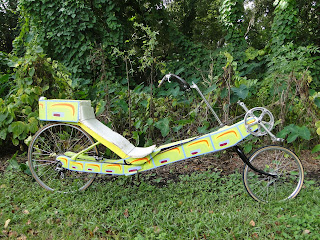 I didn't write anything about this lime green bike 'cause I couldn't think of anything that really stood out about it. 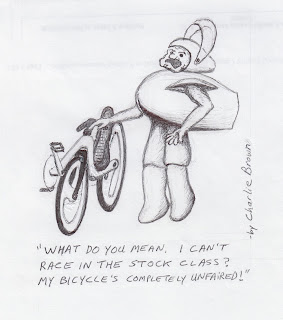 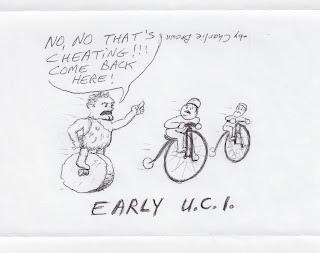