INFORMATION ABOUT THE MICHIGAN HPV RALLY JUNE 18-19 IS THE NEXT ENTRY DOWN.

It's been a few years since I last attended what is officially the Ann Arbor/Saline Classic Bicycle Show and Swap Meet. My excuse for not going always was I had too many other things I had to do.
I still have too many other things to do (one of these days I need to retire from retirement), but at 6:35 a.m. on Sunday, April 24, I was on the road to the 36th annual show – 152 miles from St. Joseph.
At the previous shows I've attended, I've seen maybe one or two recumbents – though for bicycle nuts like me, there always were interesting cycles to see.
But this year, there were enough recumbents to be noticeable.  I talked to a fellow who bought a Rans Vivo short wheelbase suspended recumbent.
There was even a bicycle shop that specializes in selling recumbents – Fremont/Elmore Cycle & Fitness (with stores in both of those Ohio towns) with several Sun recumbents for sale (all out-of-production models, as I recall).
Also a change from past years, from what I recall, there were a lot more old school BMX bikes (and probably many not-so-old-school) for sale.
Inside one building is the actual "show," with bicycles on display in many categories, which were judged. But the vast majority of the space on the Washtenaw Farm Council Grounds, inside the other buildings and outside, is occupied by people selling bikes (like-new, restored, in need of restoration or perfect for a rat rod or cutting up to make into a recumbent) and parts. 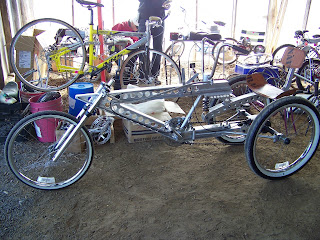 Two views of this amazing tricycle, one of several creations made by Rick Legato of Rochester.  "This is bad ass," said one viewer. "... This is really unique."  Rick, who works as an aircraft toolmaker (machinist)  did the design and machining, but not the welding.  The frame is mostly made from aluminum I-beam.  The tricycle is for sale. The yellow bike behind it is a much modified mountain bike. 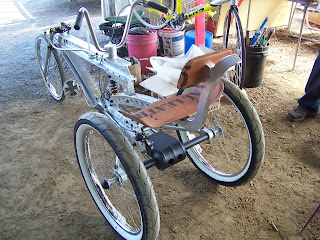 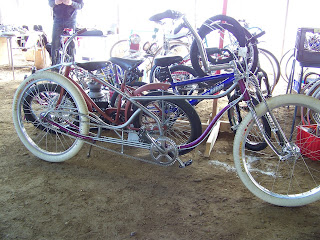 A stretch cruiser by Rick Legato, also for sale.  The purple part was a 1966 Schwinn Starlite.  The silver parts of the frame are new tubing.  A Brooks leather saddle (made in England) provides the seating.  The rust colored bike behind it is another Legator creation. 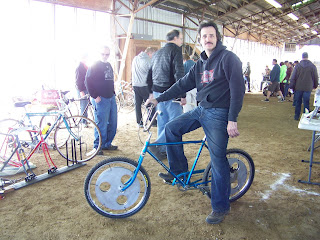 Rick Legato astride what he calls his "clown bike."  The front and rear hubs are off-center, so the bicycle bounces up and down as he pedals.  Such bikes are usually built by lacing conventional hubs and rims together using varying length spokes.  But Rick machined the from and rear disks with the hubs mounted off-center, but the spokes are all equal-length. 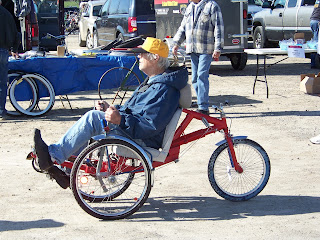 This gentleman pedaled by on this apparently homebuilt front-wheel-drive, rear-wheel steering tricycle just after I arrived. I thought I would find him later and get some information, but didn't, unfortunately.  There is, or was, a production FWD, rear-wheel steering trike, the Sidewinder. Its website still exists, but all four of its models are  "out of stock ," so the status of the company is unclear. 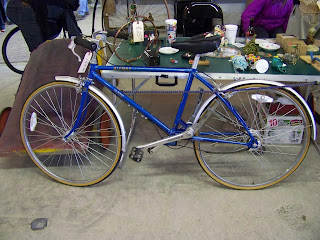 This lever-drive Alenax was for sale for $165.  An article in the May 1984 issue of Bicycle Business Journal said the company was projecting sales of $100 million (presumably annually) and manufacturing in the U.S. within 18 months.  Production was somewhere in the Orient. The lever drive system was said to be suitable for any type of bicycle – road, mountain, BMX, juvenile and adult tricycles. But the Alenax was not a success and production apparently ended in 1993. 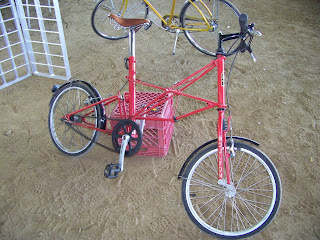 This 3-speed Alex Moulton sold for $600.  Alex Moulton introduced his small-wheeled bicycles with front and rear suspension in 1962  Some models over the years have been produced by other companies.  Moulton died in 2012 at age 92, but the Moulton Bicycle Co. still manufactures bikes in Bradford on Avon, England.  They are available for sale in the U.S.  www.moultonbicycles.com.uk 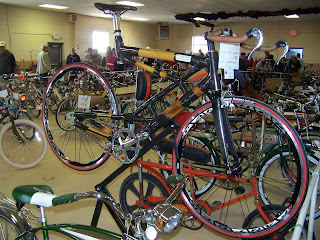 This bamboo beam bike was judged "best unrestored" bike in that category in the "show" part of the Ann Arbor bicycle show.  That is, the seat is at the end of the bamboo beam, which flexes to provide suspension for the rider.  The bike is a one-speed "fixie." 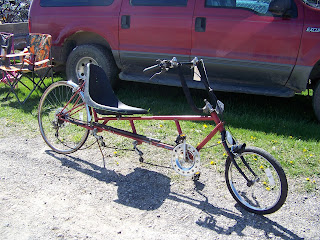 This sort-of Tour Easy clone was apparently homebuilt.  Construction quality was good , but the bike was very heavy.  If there was a price on the tag, I neglected to write it down. 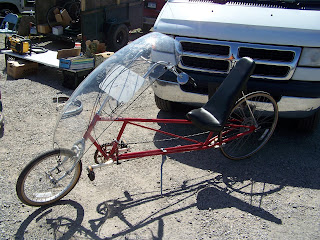 In contrast, this was a genuine Easy Racers Tour Easy, apparently an early model.  The card said, "make offer," and listed the owner's phone number.  The owner wasn't nearby to talk about the bike. 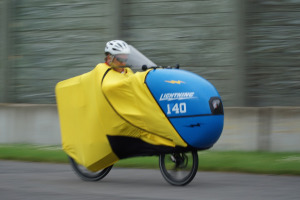 The rally will be held at the Waterford Hills sports car racing track on the Oakland County Sportsmen's Club grounds in Clarkston, near Pontiac - the location since 1986.The oldest such event in North America is open to riders of all human powered vehicles — recumbents, regular bicycles, tandems and handcycles.There are classes for streamlined, unstreamlined cycles, tandems, women, youth and tricycles. The rally is conducted using Human Powered Race America rules (www.recumbents.com, then under "recumbent racing," click on "Human Powered Race America," then on "racing rules." Note: HPRA rules require all vehicles to have a mirror or mirrors enabling rear vision to both sides.The track is 1.4 miles around, with nine turns and one hill. Sunday races use a shorter course without the hill.


The Michigan HPV Rally is continuing, but the Michigan HPV Association is going out of business (see article below).  So to help empty the MHPVA treasury, the entry fee is only $10 for the weekend (both days), per entrant, even for those racing more than one vehicle. Register in advance by going to http://register.bostonandpop.com or at the rally.Spectators free. Even if you don't want to compete, come and see some unusual and some very fast bicycles and tricycles. Prize money will be awarded to top finishers in each class. Again, to help empty the MHPVA treasury, prize money is being boosted this year. 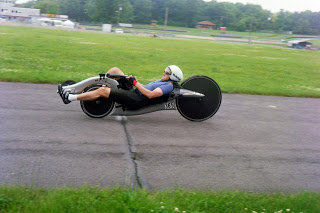