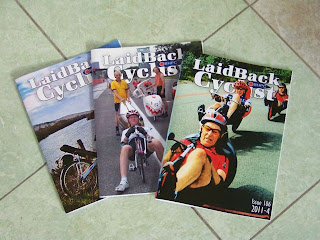 Sure, there's lots of information about human powered vehicles to be found on the Internet, but long-time HPV junkies like me fondly remember when we read about the latest creations and innovations on paper in publications that came in the mail.
The International Human Powered Vehicle Association published HPV News and Human Power on a regular basis, and there also was Recumbent Cyclist News, published five or six times a year.
But there's still one publication for HPV junkies, LaidBack Cyclist, published quarterly, and the British Human Power Club last year lowered the price and beefed up the content in an effort to attract more overseas subscribers.
The rate is 20 pounds, which as of this writing in early February was $31.63 U.S. and $31.70 Canadian. Subscriptions can be made with payment via PayPal. Go to
http://www.shop.bhpc.org.uk/products/102-overseas-membership.aspx. The club's website is www.bhpc.org.uk.
I started subscribing after a visit to England in May 2011, which included a visit with BHPC Chairman Richard Ballantine, author of several books about HPVs, and well-known cycle designer, builder and writer Mike Burrows, who has the title of LaidBack Cyclist commissioning editor.
Since subscribing, I've received four issues, with from 28 to 64 pages (including covers).
Common to all issues are reports and photos of BHPC races, of which there are several each year.
But there's lots more. Issue No. 106 includes a 13-page report by two BHPC members about the World Human Powered Speed Challenge in September at Battle Mountain, Nev.
There also was part 3 of Miles Kingsbury's report on his building of Quattro, a velomobile with suspension on all four wheels, front-wheel-drive and four-wheel-steering. He rode it in the 3,100-mile Roll Over America ride for velomobiles in the summer of 2011 from Portland, Oregon, to Washington, D.C.
There's also cycle reviews, including the Munzo TT tilting tricycle from the Netherlands in issue No. 106, a Raptobike lowracer in issue No. 105 and an M5 Carbon High Racer in No. 103.
Of interest to homebuilders are the technical articles.
In issue No. 106, Dave Tigwell described how he builds front-wheel-drive forks. Issue No. 104 had an article, translated from Dutch, on building of wood velomobile, mostly from red cedar. In No. 103, Lee Wakefield described the building of his front-wheel-drive streamliner.
LaidBack Cyclist also is seeking articles from overseas. Issue No. 5 included an article by this writer on the 27th annual Michigan HPV Rally and the Human Powered Race America series.
The BHPC is primarily a racing organization, “formed by a group of people who wanted to race their fast but funny looking bikes and trikes more than once a year,” it says in “Who we are,” included in each LaidBack Cyclist issue. “...but we also have a social side. And individual members will organize touring rides and other non-competitive events.”
Posted by mike at 10:10 PM No comments: