A rolling tribute to 'Chainsaw' 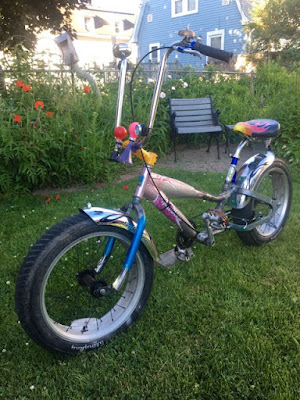 Editor’s note: Jim “Chainsaw” Johnson of Holly, who played a big role in creation of Terry Gerweck’s latest project, died April 22 at age 60. Among survivors were his wife, Dora “Giggles” Johnson, who also is mentioned in this article.
From his obituary: “Jim was a co-founder of Freakbike Nation; he grew a huge family of followers of like-minded people having fun with a hobby."

My latest project bike is my answer to a fat tire cruiser, with the usual urge to have something you can’t go buy!
Like all my builds, it floated around in my head long enough for me to “acquire” most of the raw materials to start construction.
The rear portion of the frame and bottom bracket are from a really rough Schwinn / Orange County Chopper Stingray purchased at the Ann Arbor-Saline Classic Bicycle Show and Swap Meet (while there with Jim and Dora). 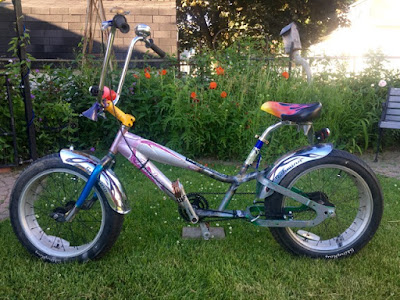 The front triangle of the frame is from a kinda unique 20-inch wheel Parker bicycle picked up from someone’s trash. A couple chunks of curved tubes from my “raw materials” stock formed the top tube.
The fork and the front wheel (which is really another rear wheel) came from Jim’s stash of parts when Dora was attempting to clean out their storage unit.
The wheels and tires are both 20 x 4 -1/4 inch units from Schwinn / OCC Stingrays.
It has wheelbase of 48.5 in., is currently running as a single speed and is geared to go “nowhere fast.” It might eventually be upgraded to have gears and a derailleur. I haven’t weighed the thing, but it’s not too bad, probably 35 pounds or so.
This was to be a conspiracy build with Jim Johnson. We were going to do the actual build – welding, assembly and all – on Saturday morning at Bike Fest in Owosso last summer. We had talked and schemed about it, sharing the plans and parts list. Jim was gonna bring the welder and I was gonna bring the grinder.
But we didn’t get around to it last year and then Jim got sick and, well, procrastination won. 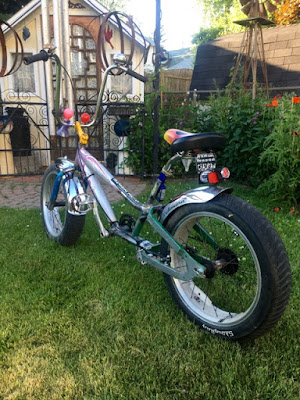 As I still had most of the pieces and parts, the bike still wanted to be built and a tribute to Jim seemed the perfect motivation.
To top it off Dora, in an effort to spread the love, invited their freak bike friends to Jim’s “work shop” to cherry pick his years’ long collection of EVERYTHING that could be imagined in a freak bike that Jim would have built.
More than one of us “cherry picking’ Freaks” have or will dedicate the build the acquired parts turn up in to Jim’s spirit. In my case, the front wheel and fork and a couple things yet to be determined went into this project.
The motivation part came when Dora chose to have a memorial Freak Bike Ride in Holly on June 5 to take Jim to his final resting place. So you see, Jim and Dora, “Chainsaw” and “Giggles,” still had a hand in this build. Just not the way originally planned. 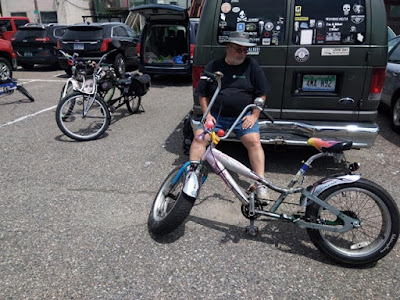 Terry and his yet-to-be-named creation at the memorial ride for Jim "Chainsaw" Johnson June 5 in Holly.  About 20 Freakbikers participated.

At the moment, it is finished in typical freakbike fashion, that is welded, assembled, and ridden, no paint required! It will likely get a coat of paint, some special stickers and there are a couple additional modifications planned.
The still un-named project rides as well as I intended (and better than I deserve) and I think Jim would approve.
Of course it runs a tag that says,“Why run with scissors when you can ride with CHAINSAW”.