A look at some very old recumbents

Long time recumbent enthusiasts know, or should know, that recumbent bicycles are not something that were created in the 1970s or '80s.
The chapter devoted to recumbents in Bicycle Design: An Illustrated History by Tony Hadland and Hans-Gerhard Lessing (The MIT Press, 2014) shows patent drawings of the designs by Charles Challand, patented in Switzerland in 1895, and Irving Wales, patented in the U.S. in 1897.
Doing Yahoo searches of "vintage recumbent bicycles" and other online research has unearthed numerous photos of old designs.  For some, I have no or little information. Some information also came from various print (on paper) publications and recumbent expert John Riley in California. 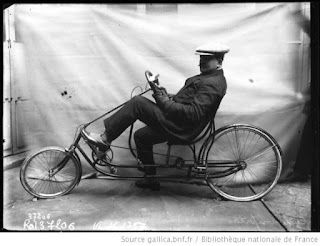 Here's a French design from 1914.  Notice the remote steering utilizing a universal joint, a common feature on early long wheelbase recumbents. An article about recumbents in the July 2001 Popular Mechanics included a reprint, plus photo, from the June 1914 PM, headlined "New Type of Bicycle Seen in Paris."  It showed two recumbents that looked very much like the bike in the above photo. 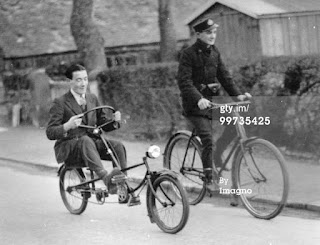 No information, but another long wheelbase with remote steering. 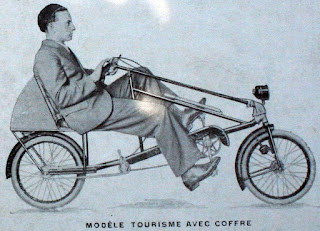 The Mochet Velo-Velocar – this one is from 1932 – probably is the best known of the pre-World War II recumbents and was manufactured (in France) in greater numbers than any other recumbent.  The were touring and racing versions.  Charles and Georges Mochet, father and son, produced side-by-side four-wheel pedal cars from 1928 to 1944 or '45 and the two-wheelers from 1932-41.  After WWII, they produced motorized microcars, scooters and motorcycles until apparently 1958.  To read and see more, go to www.mochet.org.

A Moller Auto-Cycle, also know as a Triumph Moller Auto-Cycle, since the Triumph bicycle company in England manufactured the Swedish design by Holger Moller under license. Some Mollers had steering wheels, like this one, and others had handlebars, though they also utilized the steering shaft and universal joint.  The Moller was patented in the U.S. in 1938. 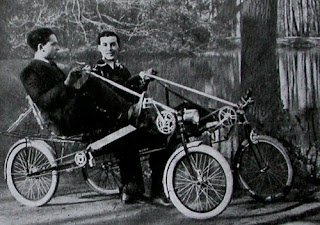 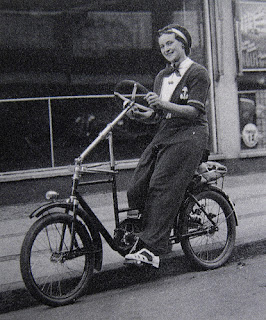 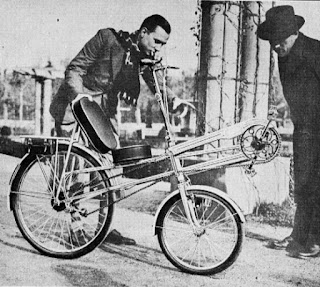 The Ravat Horizontal was manufactured in France in the mid-1930s. It was sold in the UK as the Cycloratio.  Rear wheel was 28 inches; front, 20 inches; wheelbase, 36 inches. 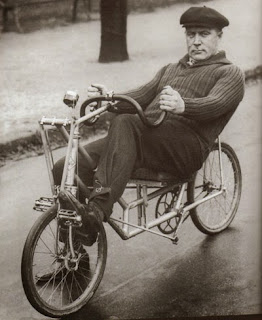 Oscar Egg, from Switzerland, set the world hour record in 1914 at 44.247 km (27 miles, 385 yards). Then after Francis Faure of France pedaled 45.055 km in an hour in on a Mochet recumbent in 1933,  breaking Egg's 1914 record  Egg built this lever-drive recumbent with the goal of becoming the first cyclist to pedal 50 kilometers (31.07 miles) in an hour.  He intended to enclose it in a fairing, that is, turn it into a streamliner. But Faure in a streamlined Mochet  was the first to accomplish 50 km in an hour, in 1938, and Egg apparently never made an attempt with his lever-driver machine. Faure's 1938 record was unofficial because after his 1933 record, the UCI governing body outlawed non-traditional designs, such as recumbents. 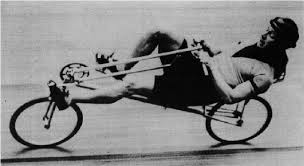 Francis Faure of France sets the world hour record in 1933 on a Mochet Velo-Velocar, 45.055 kilometers. After that, the UCI governing body required such records to be set on "conventional "upright bicycles. 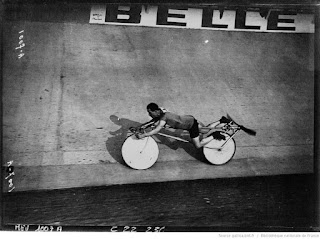 Prone position bicycles also aren't a new idea, although I don't have a date on this one. 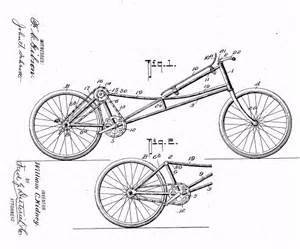 A patent drawing for another early prone design. 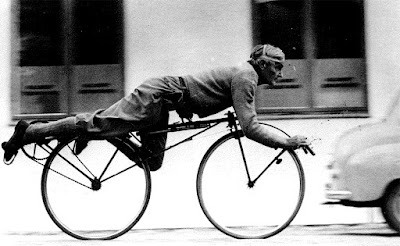 Another prone design.  This photo was taken in Sweden in the 1950s.  In 2013, an online advertisement appeared in Sweden to sell perhaps the very same bike (photo below). The ad said the bike was made in the Netherlands. 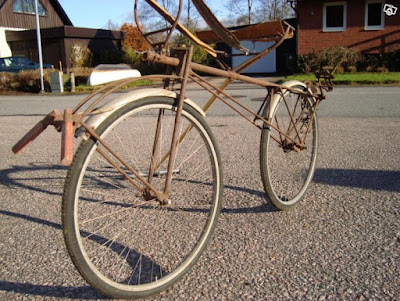 Some links:
– www.bicycleman.com, then on the home page, under "New to Recumbents," click on "Recumbent history."

– Not in English, but some interesting images:
http://wstiffel.homepage.t-online.de/HPV-GESCHICH.htm

– Also not in English, and not every cycle shown is old: https://www.velomobilforum.de/forum/index.php?threads/historische-liegeraeder-in-dresden-kleiner-rueckblick-mit-bildern.7963/

– www.oldbike.eu/museum.  Unfortunately, there's no separate listing for recumbents.  Pick a year, for instance, click on "1930s," then on "1932," then on "1932 Mochet Velocar Modele Sport Recumbent Prototype."  Under that entry, there's lots of photos and some magazine articles from that year.