Grove City College HPV team to be at Michigan rally

The Grove City College HPV racing team will be participating in this year's Michigan HPV Rally, June 24-25, for the first time.

The University of Toronto, which has competed at the Michigan rally every year since 2010, will be back, so at least two college teams will be participating.
Grove City College (www.gcc.edu), founded in 1876, is a Christian liberal arts college in Grove City in northwestern Pennsylvania.  The Department of Mechanical Engineering is part of its Hopeman School of Science, Engineering and Mathematics.
According to Dr. Mark Archibald, faculty adviser to the team, likely eight students will be coming to the rally. He said in an e-mail that the team usually builds a vehicle each year. However, this year was an exception, so they will be bringing some of their older bikes. 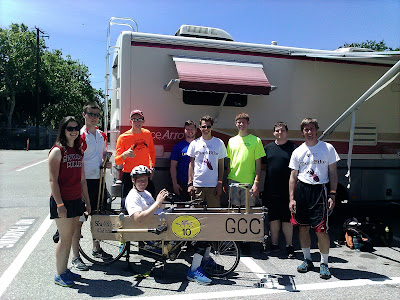 This is the Grove City College team at the 2015 American Society of Mechanical Engineers HPV competition in San Jose Calif. "Shark Bike" used a conventional rotary crank, driving the rear wheel.  The partial fairing was made from Ceconite aircraft covering fabric.  It  wasn't economical to ship SharkBike back to Grove City from California, so the frame was left with a team member’s mom, who lives in Washington state.  So "Shark Bike" won't be at the Michigan rally. 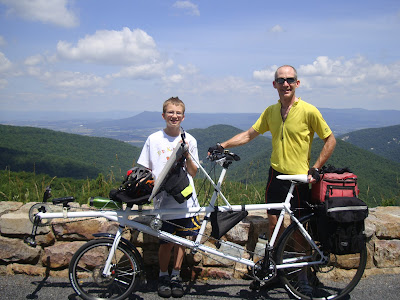 In addition to student team, members Prof. Archibald and his wife, Sally, expect to compete on this tandem he built.  He and son Max and the bike are shown during a tour of the Blue Ridge Parkway in 2010.

Earlier this year, the ASME presented its Prof. Archibald with its Dedicated Service Award.  From the GCC website:

The award comes in recognition of Archibald’s volunteer efforts on behalf of the society, particularly his work in the field of human-powered vehicles, which is marked by “outstanding performance, demonstrated effective leadership, prolonged and committed service, devotion, enthusiasm, and faithfulness,” the society said.
The award was formally presented to Archibald by Dr. Michelle Claus ’83, chair of the GCC Department of Mechanical Engineering. She called it an honor and hailed Archibald’s dedication to his discipline and his students. Archibald has advised many students as they worked on human-powered land and water vehicles and worked for many years with ASME’s Human-Powered Vehicle Challenge.
“He has served as a student advisor, a competition host, a competition judge, a global chief judge, the chair of the Human Powered Vehicle Challenge Committee and as an expert in the field of human powered vehicles. The award is presented on behalf of the Human Powered Vehicle Challenge (HPVC) Committee members and ASME in appreciation for his contributions to the HPVC community and students,” Clauss said.
Archibald has been a member of the GCC faculty since 1996.