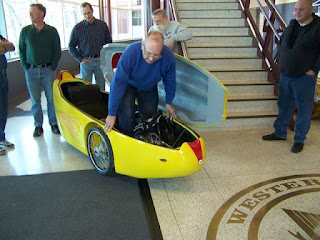 RICK WIANECKI of Okemos, shown here climbing out, brought his homebuilt velomobile with electric assist to the MHPVA meeting. It has suspension on all three wheels, can go about 24 mph using only the motor (faster if Rick also is pedaling) and has a range (electric motor only) of about 20 miles. To see the entire design and building process, go to www.recumbents.com, then click on "HPV projects and research," the "fairing building projects," then "Rick Wianecki's velomobile project." 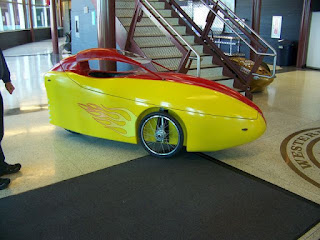 Article and photos by Mike Eliasohn 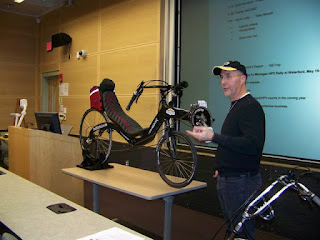 ALAN D' AUGUSTINE of Grosse Pointe Park showed his carbon fiber M5 (above) and titanium Easy Racer TI Rush. The M5, made in the Netherlands, weighs 23 pounds. The custom Zotefoam seat pad was made by Don Smith. The made-in-California Easy Racer, with carbon fiber fork, weighs a little over 24 pounds. (In addition to seat pads, Don modifies Rotor System cranks to reduce rotating drag and does other specialty work for HPVs. Contact him at bbmracing@yahoo.com.) 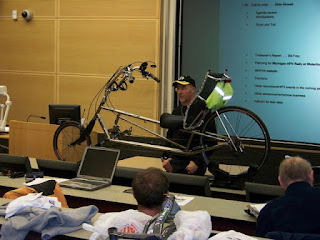 There was discussion about the Michigan HPV Rally. Due to the unavailability of the Waterford Hills track in June, our usual month, this year's rally, the 28th annual, will be May 19-20. The schedule of events likely will be the same or similar to last year. More information will be coming soon on the website and this blog.
The entry fee will remain the same as last year - $40 for both days, or $30 for one day, of which $10 will be for MHPVA membership dues. The one change is the test ride pass, which used to cost $5, will now be $10, which also will include MHPVA membership.
Mike Mowett reported there is one change in the Human Powered Race America classes for this year. "Streetliner" replaces the former "superstreet" class, with special provisions allowing velomobiles, defined as having three wheels, providing weather protection allowing the rider to commute in street clothes and the ability to carry at least three or more grocery bags. (Editor: The rules don't specify the bags - paper or plastic - have to be full of groceries, but perhaps that is presumed.) Two-wheelers s are allowed "any amount of fairing," which must have an open bottom so the rider can put his/her feet on the ground for starting and stopping.
All the HPRA rules, including full definitions of all the classes, can be seen at www.recumbents.com/hpra/rulesand.htm. 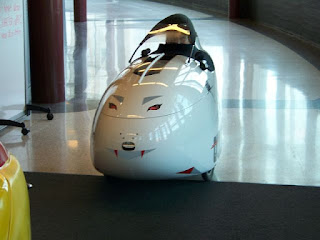 TWO VIEWS of the Blue Velo Quest bought by Chris Evans of Flint last August. In the photo below, Dave Johnson is inside the Quest and talking to Chris. Don Smith modified the three-wheel suspension so there's now five settings, from "lockout" (no suspension) to ultra soft. Chris installed a stereo system. Blue Velo, in Toronto, Ontario, sells five velomobile models (www.bluevelo.com). 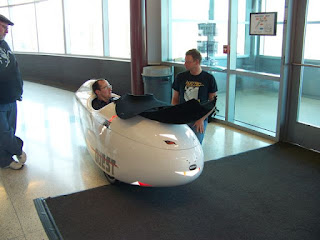 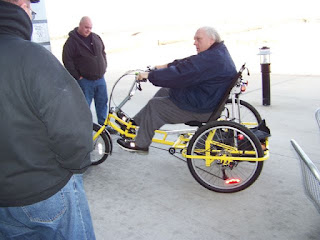 ROBERT ALWAY'S Lightfoot tricycle was too wide to come through the door, so for show-and-tell, he parked it outside, while some people looked through the window and others came outside. It's the second Lightfoot trike the Otsego resident has owned. As can be seen in the photo below, there's space for carrying lots of stuff. Lightfoot Cycles (www.lightfootcycles.com) in Darby, Mont., makes five models of trikes, plus recumbent two- and four-wheelers and velomobiles. 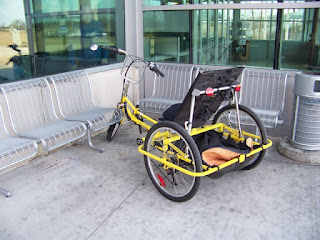