Four HPVers from Michigan participated in the July 28 races on the velodrome in Northbrook, Ill., and the following day on the velodrome in Kenosha, Wis. They were  Mike Mowett of Detroit, Cyrus Furbush, Tecumseh, and Rob Lloyd, Whitmore Lake, who finished 4th, 5th and 6th respectively in the stock class; and Rob's son, Cameron, 11, who was 2nd in the junior class.
I (Mike) only went to the Saturday races in Northbrook, hence no photos from Kenosha.
To see all the results and photos by others, go to www.recumbents.com, then under "recumbent racing," click on "HPRA racing results and pictures." 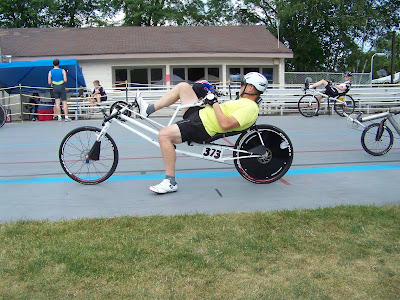 Rob Lloyd of Whitmore Lake first raced his homebuilt recumbent at the 2017 Michigan HPV Rally.  It was unpainted, which showed its beautifully smooth brazed joints.  (See blog article July 16, 2017).  He raced a modified Rans at the 2018 Michigan HPV Rally, but at Northbrook, he was on his now painted homebuilt, with a larger front wheel.  (Previous front wheel was 20-inch/451 mm). 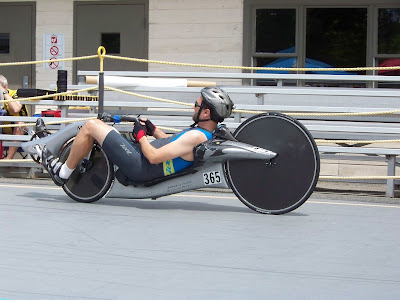 Mike Mowett of Detroit raced his Morciglio M1 at Northbook and Kenosha.  He finished 4th  in the stock class for the weekend.  In the 200 meter flying start at Northbrook, one of four events during the weekend, he finished third with a speed of 35.37 mph. 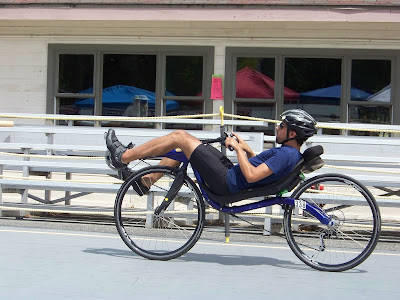 Cyrus Furbush of Tecumseh, who came to the Illinois events with Mike Mowett, raced his M5 M-Racer to 5th in the stock class for the weekend. There were 13 stock class entries.  Cyrus' speed in the 200 meter sprint at Northbrook was 34.51 mph, good for 6th place. 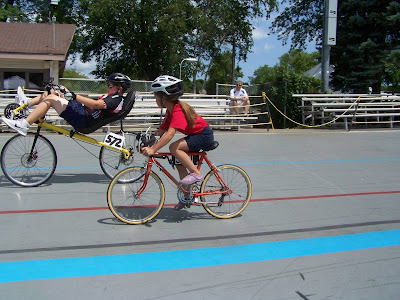 The fourth competitor from Michigan was Cameron Lloyd, 11, who came with his father, Rob and raced a modified (by his father) Rans Enduro.  During the 20-lap juvenile class race at Northbrook, he passes Martina Kowalik of Deerfield, Ill., the youngest competitor at age 7. 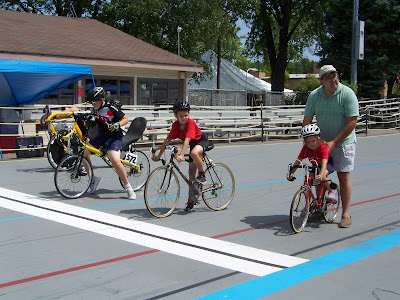 The future of HPV racing:  Lining up for the start of the 20-lap race at Northbrook were, from left, Ishtey Amminger, 15, Memphis, Tenn., who won on his Cruzbike; Cameron Lloyd, 11;  AdrianA Kowalik, 9, Deerfield, Ill.; and Martina Kowalik, 7, being held by dad Fran Kowalik. 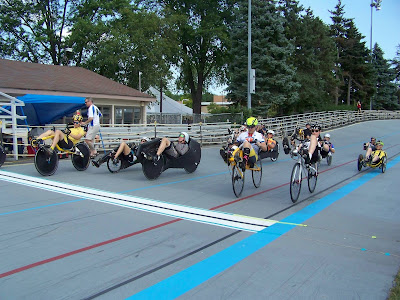 The start of the 50-lap race for unpaired vehicles at Northbrook.  The winner was Dennis Grelk of Donelson, Iowa, on the large black low racer in the center of the front row.  He rode the 50 laps (11.84 miles) at an average speed of 29.47 mph. 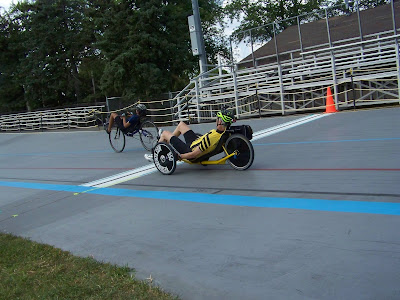 Warren Beauchamp of Elgin, Ill., had his not-yet-completed tricycle at the Jan. 20 HPVer gathering at the home of Bruce and Linda Gordon in Buchanan. Now finished (obviously), here he is racing it at Northbrook.  His complete construction diary can be seen on the home page of the website Warren edits, www.recumbents.com. 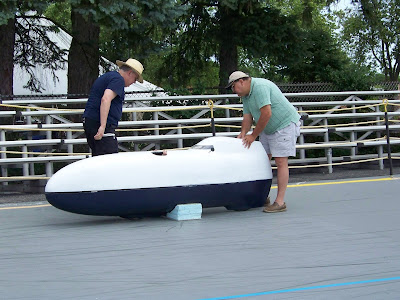 Garrie Hill (left) and Fran Kowalik get Sean Costin ready for the start of the 100-lap streamliner race. Sean won over seven other streamliners, riding the 23.68 miles at an average speed of 36.89 mph.  (The Northbrook velodrome is 382 meters around.)  Second was Dennis Grelk, who finished four laps behind Sean.  (When the winner completes the race distance, everyone else finishes the lap they are on and are done.)  A view of Sean's streamliner – built around a Nocom low-racer is below. 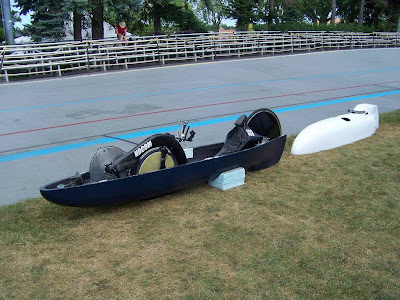 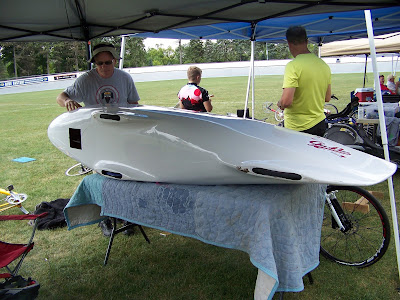 Peter Amminger of Memphis, Tenn., works on the TriSled GeeBee, owned by Garrie Hill, in which Peter's son, Ishtey, 15, hopes to set the world multi-track speed record in the 15-17 age bracket at the World Human Powered Speed Challenge Sept. 10-15 at Battle Mountain, Nev.  The current record is 57.92 mph.  If it's not obvious, the GeeBee has two wheels in front. 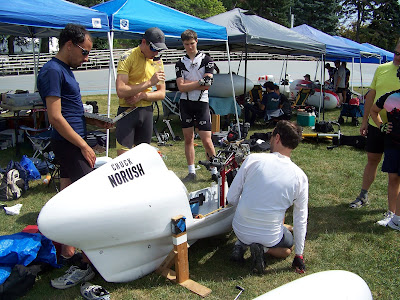 Mike Mowett (kneeling) brought what officially is his Norus streamliner to Northbrook, but didn't race it. He explains its inner workings to, from left, Cyrus Furbush and brothers David and Nathan Sommerfeld, from Iowa. David's homebuilt front-wheel-drive recumbent, which he raced at Northbrook and Kenosha, was shown in the Sept. 28, 2017 blog entry about the HPV races in Cedar Rapids, Iowa.  He said he's now building a streamliner.

Posted by Michigan Human Powered Vehicle Association at 12:37 AM No comments: