If you missed these magazine articles when they were new, they're worth reading next time you're at your public or school library and maybe, like me, making photocopies.

"The Beastie Bike," Popular Science, January 2014 – Three pages and four photos of Graeme Obree, "The Flying Scotsman" (a movie worth renting), and the lever-drive, prone position two-wheel streamliner he built and raced at the World Human Powered Speed Challenge at Battle Mountain, Nev. in 2013. Popular Science might be accused of celebrity journalism. Obree went 56.62 mph, the fastest speed ever for a prone-position bike, but Sebastiaan Bowler of the Netherlands setting a top speed record of 83.13 mph in the Velox 3 streamliner at the same event earned only one sentence in the article.

"The Improbabable Flying Machines of Sywell," Popular Mechanics, February 2014. Eight pages and five large photos of the second Icarus Cup competition for human powered airplanes at Sywell Aerodrome in the United Kingdom, conducted by the Royal Aeronautical Society Human Powered Aircraft Group. Which leads to the question, why doesn't someone organize a similar competition in the United States? 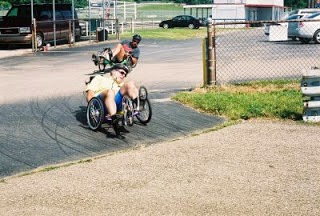 Photo taken at Michigan Human Powered Vehicle Rally
THE SCHEDULE:
7:30 a.m. – Gates open.
7:30 - 9 – Registration, trike safety inspection
9 - 11 – Solo racing.
11 – Group racing begins and will continue, with a lunch break, through the afternoon. How long it takes to give everyone their fill of racing will depend on how many show up to race.

Registration can be done online at http://bostonandpop.com/trike_rally until June 18. The cost is $20 if you register in advance online; $25 if you register at the rally.

The rally will be conducted under the rules of Human Powered Race - America, which are posted at www.recumbents.com/hpra, then click on "rules and classes."

SPECIAL PRIZES: Azee Prize for the best performing team in the solo event. Team members must be separated in age by 58 years or by having one member of the team less than 12 years old and the other older than 50.
Ceepee Team Prize awarded in the solo event for best parent-child team using combined times. Stepchildren, foster children and grandchildren are eligible. Other relationships, such as niece, nephew, etc., will be considered at the race director's discretion.

Grand Rapids-based recumbent tricycle manufacturer TerraTrike plans to be at the rally from 9 a.m.-3 p.m. with various models available for test rides. 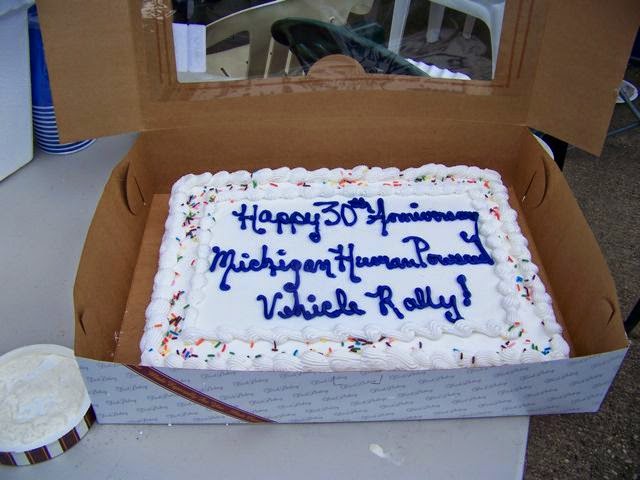 Note:  Some of these results are incomplete, due to either more than one college team member racing the same vehicle or information being incomplete on some entry forms.
Complete rally results and more photos are posted at www.recumbents.com/hpra, then click on "race results and pictures," then "2014 Michigan HPRA race results" or "pictures."    Mike E.

"Old and cold" describes the 30th annual Michigan Human Powered Vehicle Rally May 17-18, the oldest such event in North America and maybe the world.
How cold was it? The uniform of the day for those who had it, especially on Saturday, was a hoodie with the hood up, under a jacket – and gloves.  It was so cold that cars parked at the Waterford Hills track overnight Saturday "woke up" with frost on windshields and roofs.
There were 46 entries, but that doesn't translate into 46 riders or 46 vehicles. Some riders raced in more than one class and for the University of Toronto and Rose-Hulman Institute of Technology teams, there was more than one rider per vehicle, which caused some confusion in scoring results.
The Univ. of Toronto team consisted of 12 people, including faculty adviser Jun Nogami, and five or six vehicles, he said.  Rose-Hulman, in Terre Haute, Ind., had five people, including faculty adviser Michael Moorhead, and three streamliners, plus three other vehicles.
The third "team" competing was Fran Kowalik of Deerfield, Ill., and four of his children, Florian, 15, Mathias, 13, Cecilia, 11, and Genevieve, 9. But all five each had their own cycle to race. 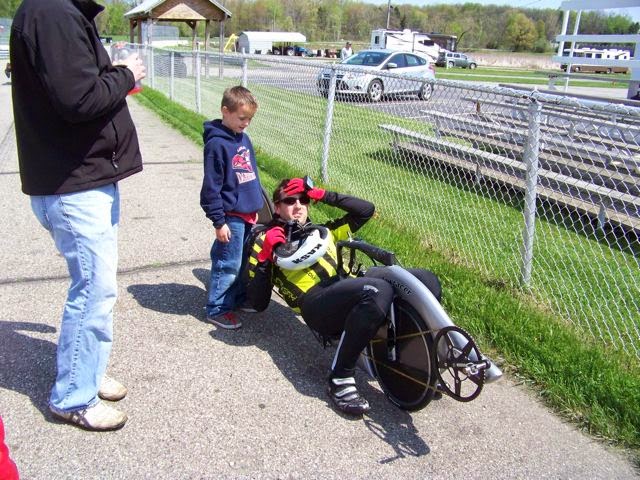 As usual, the stock class had the most entries, 20.  The top three were: 1) MHPVA President Mike Mowett, St. Clair Shores, on his Morciglio M1, 340 points; 2) Dennis Grelk, Donnellson, Iowa,homebuilt low racer, 307; and Warren Beauchamp, NoCom low racer, Elgin, Ill., 279. As usual, Dennis was the only person to compete in every event.
The top three in the other classes were:
Streamliner (8 entries): 1) Dennis Grelk in his Warren Beauchamp-built Barracuda, 312; 2) rider?, Rose-Hulman Celeritas, 310; and 3) Warren Beauchamp, homebuilt Barracuda, 283. 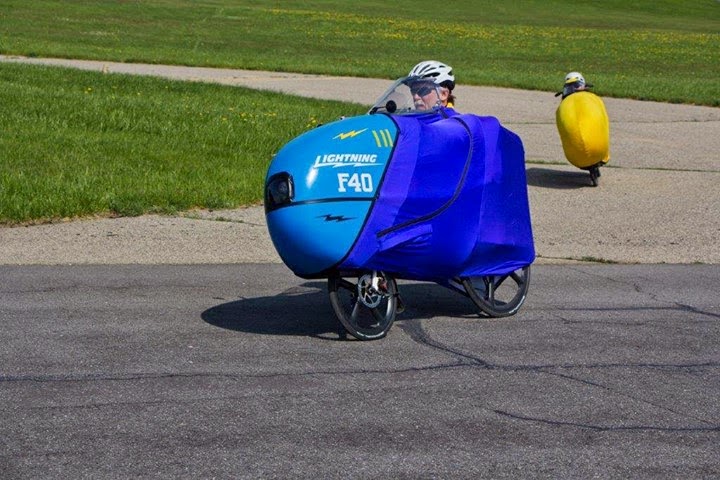 Wally Kiehler in/on his Lightning F-40, leads Richard Myers during the Sunday morning 20 lap/12-mile road race. They finished second and third respectively. On June 14, Wally and Bob Krzewinski, both riding similar bikes, but minus the fairings, depart on a 4,200-mile trip from Seattle to Boston, ending Aug. 16. Wally will blog about their journey, with hoped-for daily updates. Go to www.crazyguyonabike, then click on "journal," then "wallyk." (John Heiam photo) 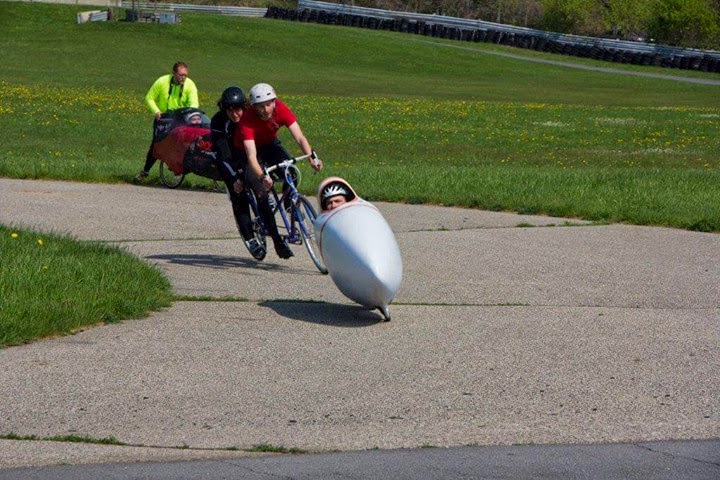 Dan Zolyniak of Toronto, in the streamliner built by him and his wife, Amanda, leads the tandem team of Matt Skorian (front) and Louis Vaught from Rose-Hulman. In the rear, Rose-Hulman HPV team faculty adviser Michael Moorhead gets the R-H streamliner, ridden by ??, back on its wheels. This was during the 20-lap/12-mile road race Sunday morning.  (John Heiam photo)

Here's the top two from each event: 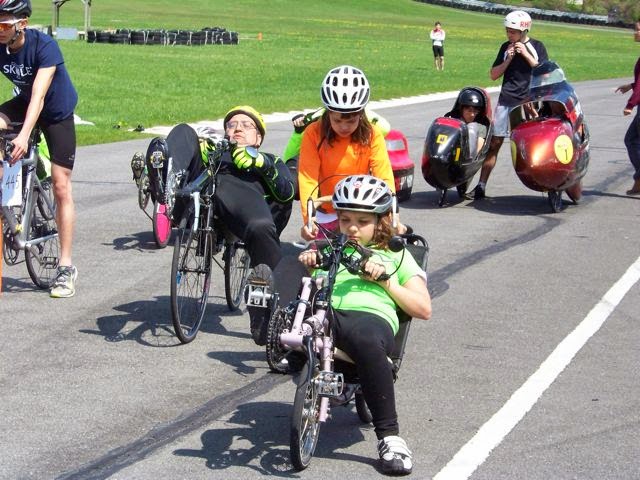 Among those waiting for the start of the hill climb / coast down are Fran Kowalik on his M-5 M-Racer and daughters Cecelia, 11, (green jersey) on an Earth Cycles Sunset and Genevieve, 9, (orange jersey) on an upright bike.  (Mike Eliasohn photo)

Urban vehicle competition: Points were awarded for time in the hill climb; finishing position in the coast down; time around two loops of an oval in the parking area, with braking performance evaluated at the finish; and points for each feature during an evaluation of the vehicle. Points were awarded for lights and fenders, front and rear; reflectors; daytime visibility; cargo carrying capacity; brakes; rearview mirrors; security against theft; convenience (getting on and off or in and out of the vehicle); weather protection; horn; bell; tools; tire pump; spare inner tube or tube repair kit; and "anything else."
Daryl Hanger on his Catrike Trail and Wally Kiehler on his Lightning F-40 tied for first with 32 points,  while John Simon with his Lightning P-38 with fairing was third. Tied for fourth were Univ. of Toronto HPV team adviser Jun Nogami on his Rock Lobster upright bike, which he uses for daily commuting and Dennis Grelk with his Barracuda streamliner, 25 points. Sixth was Tedd and Donna Wheeler on their BikeE tandem, 17 points.

Our thanks go to Mark Berend, a friend of Mike Mowett, who brought his grill to the track, bought the food (for which he was reimbursed) and cooked the chicken, hamburgers and hot dogs. There were perhaps 50 people eating. With so much time spent next to the grill, Mark may have been the only person there who was warm (albeit smoky). Making his long day longer, his vehicle ran out of gas while he and his family were going home.
Thanks also to Mike Mowett, who ordered the 30th anniversary cake from the nearby Kroger's.
A special guest was former International HPV Association President Marti Daily, who drove with  her friend from Indianapolis, in time for the barbecue and reminiscing with old friends. Because Marti had to work Sunday at Home Depot, she and her friend left after dinner and drove home. 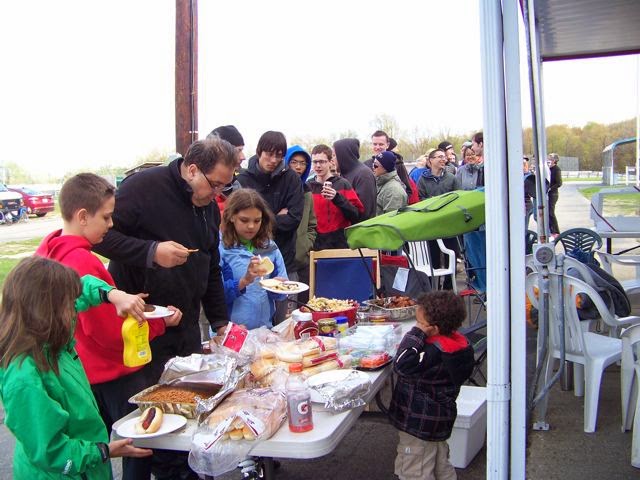 Fran Kowalik and three of his kids (left) apply the condiments during the barbecue following Saturday's events. Mark Berend did the cooking on the grill he brought to the track, as well as buying the food.  (Mike Eliasohn photo)

After dinner, Donna Wheeler, who handled everything involving the 30th anniversary T-shirts, presented special yellow shirts to Mike Eliasohn of St. Joseph and Terry Gerweck of Monroe, who started the first Michigan rally in 1983 in Monroe and have been involved ever since.  (For those doing the math, instead of the Michigan HPV Rally, in 1989, the Michigan HPV Association conducted the International HP Speed Championships in 1989 and the Michigan HP Speed Challenge in 2009.) 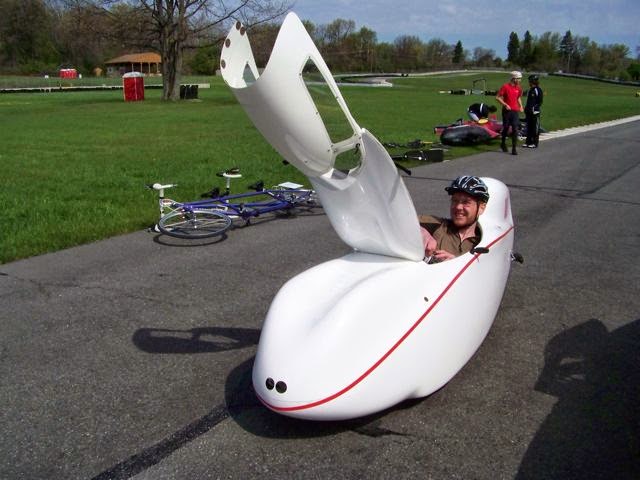 Michael Hinterseher moved last August from Germany to Farmington Hills with his family and his Milan SL velomobile. He commutes in it to work at Bosch. He spectated and took photos at the rally on Saturday, then competed on Sunday. He finished first in the streetliner class in the 200-foot sprints (39.77 mph) and in the 20 lap/12-mile road race.  (Mike Eliasohn photo) 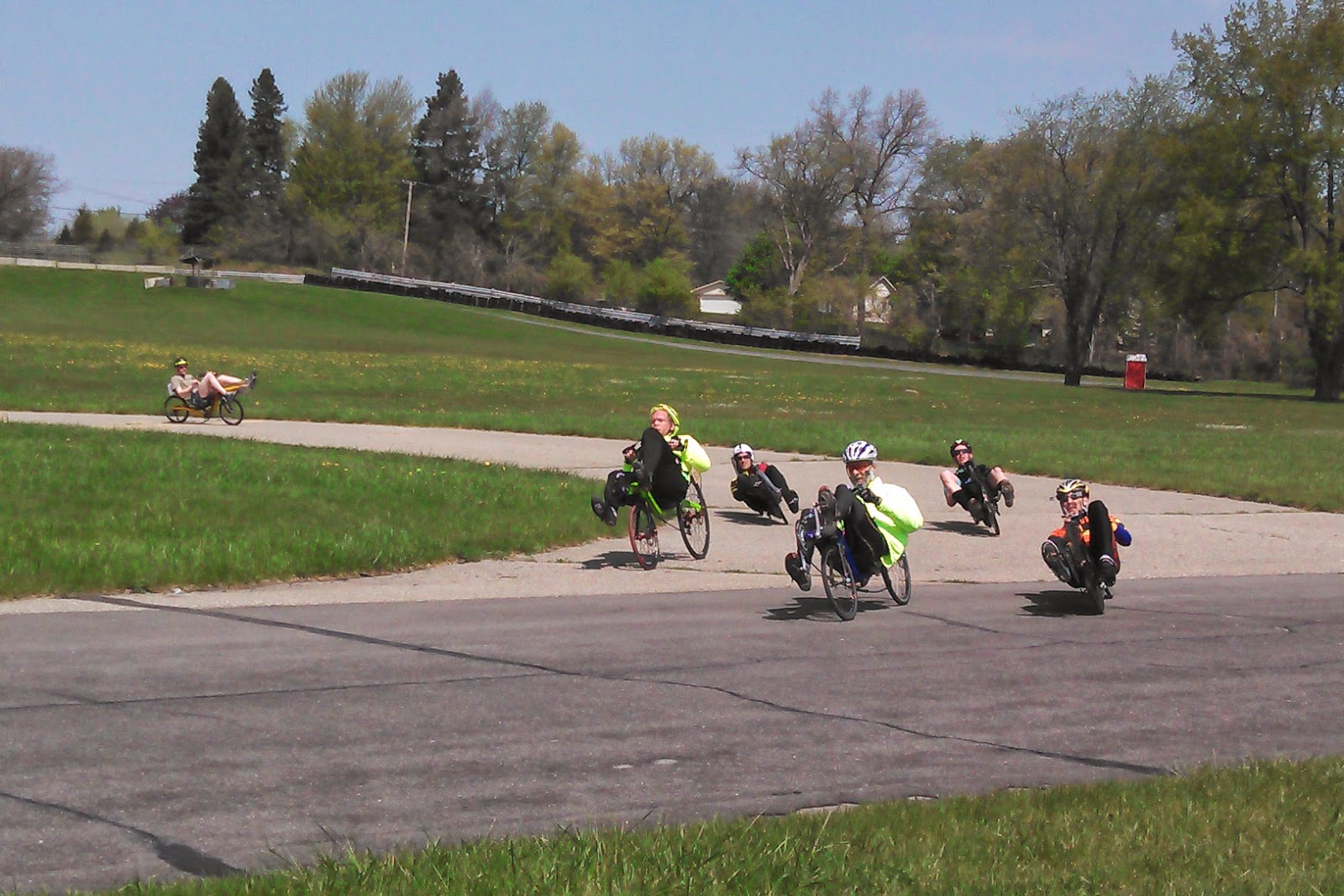 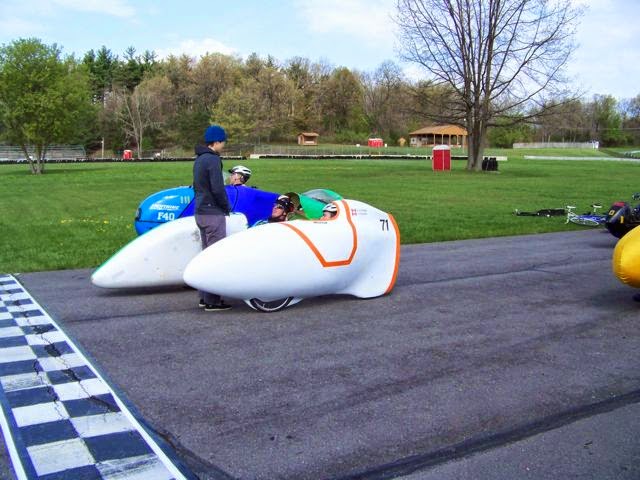 Prior to the start of the Sunday morning (I think) 20 lap/12 mile road race are, from rear, Wally Kiehler, Dennis Grelk, Amanda (standing) Zolyniak and her husband, Dan, from Toronto. The Zolyniaks were members of the University of Toronto HPV team. Now graduated, they built their own streamliner. Other than using a U-T mold for the fairing, the streamliner is their own design. They took turns racing it at Waterford Hills. On Sunday, Dan rode in the first race and Amanda in the second. In the 200-foot sprints, both had the same speed, 33.48 mph.  (Mike Eliasohn photo) George Cooney of Royal Oak demonstrated his monocycle on Saturday. It's propelled like a scooter, that is, standing on one foot and pushing with the other. Pulling down on the handlebars provides added "thrust."  (Mike Eliasohn photo)