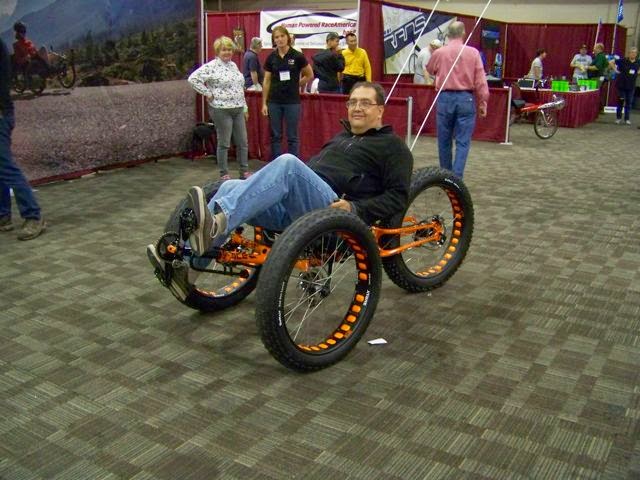 Fran Kowalik of Deerfield, Ill., well-known in HPV racing circles, on the new ICE Full Fat FS (full suspension), before pedaling it outside for a test ride. The Full Fat is the "civilian" version of the similar trike that Maria Leijerstam pedaled 396 miles from the edge of the Antarctic continent to the South Pole last December. The Full Fat will be available from the British trike maker for somewhere between $5,000 and $7,000. (www.icetrikes.co)

It was recumbent heaven for laid-back cycling enthusiasts who attended Recumbent Cycle-Con Oct. 12-14 in St. Charles, Ill., west of Chicago.
It was the third such event conducted by Recumbent and Tandem Rider Magazine (www.rtrmag.com). The first two, in 2011 and 2013, were in Pomona, Calif.  The 2015 RC-C will be in (or near) Cincinnati, Ohio.
The event drew about 17 manufacturers, plus a few recumbent dealers (as exhibitors) and makers of accessories, such as car carrier racks. Human Powered Race - America also had a display of racing bikes and trikes, organized by Warren Beauchamp.
The first day (Friday) was limited to "those in the business," while Saturday and Sunday were open to the public. Admission was $10 for "looking only," while those wanting to look and ride bikes and trikes on the test track paid $20.
There also were workshops, with some sessions limited to dealers, such as ways to increase their business, while others were of general interest, such as touring on recumbents and racing.
TerraTrike in Grand Rapids showed its new Traveler folding trike, but I neglected to take photos.(www.terratrike.com)  It goes on sale in January.
For more information about it and other bikes and trikes shown at Recumbent Cycle-Con, go to www.bentrider.bike. from which I got some of this information. (Bentrider editor Bryan Ball had a booth at the show.)
Recumbent and Tandem Rider publisher Charles Coyne and his wife, Janette Bijl, both said they found that Recumbent Cycle-Con draws people mostly within a 500-mile radius, which presumably precludes the event being held in the future on the East or West coasts. If you're shopping in the future for a recumbent, or simply want to see (and ride) what's available, the event is worth going to. 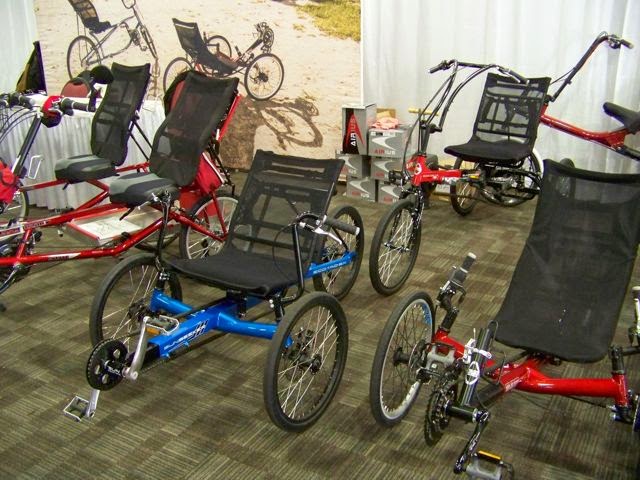 Sun Seeker had numerous bikes and trikes on display and available for test rides.  The blue trike is the new Eco Tad SX ($900) and behind it is the new Eco Delta SX ($830), with the two wheels in the rear. J and B Importers has rebranded its recumbents "Sun Seeker," to distinguish them from its "Sun" brand upright bikes and trikes. Most bike shops can order them. (www.sunseeker.bike) 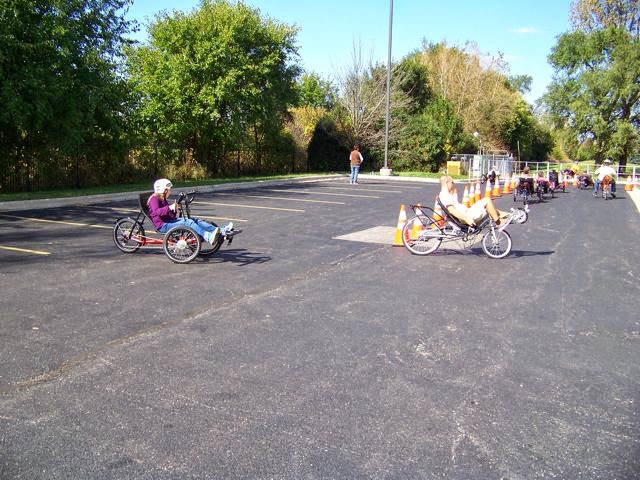 Linear Recumbents debuted its Minear, designed for shorter riders. The front wheel is 16-inch; the rear, 20-inch.  It also introduced folding versions of its Roadster short-wheelbase and Limo long-wheelbase. The frames are aluminum and the bikes are built in New York state. (www.linearrecumbent.com) 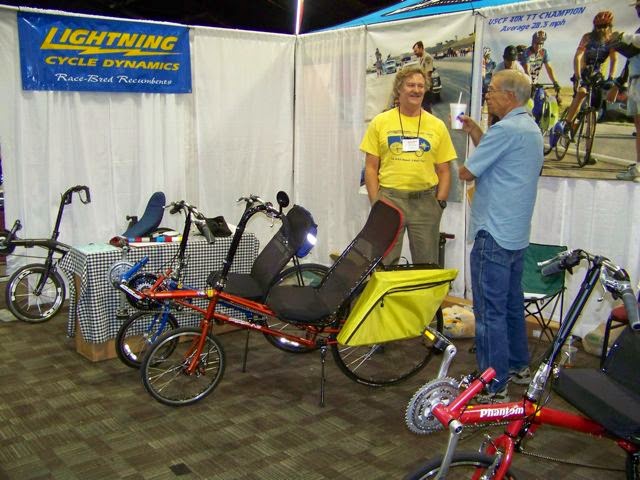 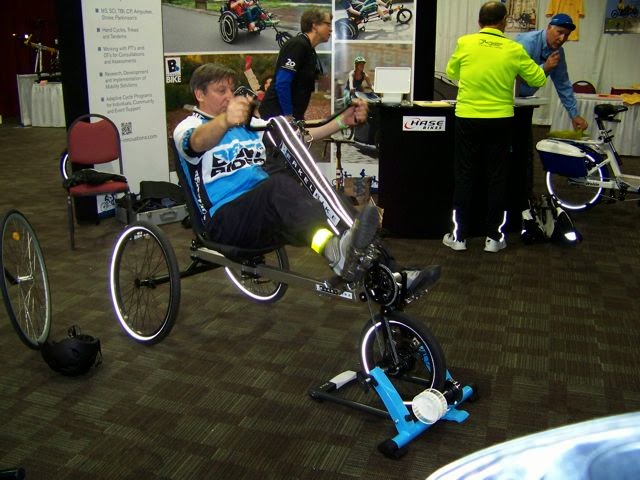 Fred Watner of Louisville, Ky., tries the BerkelBike, sold by Rad Innovations in Granville, Vt. (www.rad-innovations.com).  The front wheel is driven by conventional foot cranks, as well as the handlebars, when "pedaled" forward. Braking is done by cranking the handlebars backwards. The handlebars also do the steering, of course. The BerkelBike is intended for people with disabilities, but also can be used by anyone who wants to strengthen their arm muscles, as well as their legs. There's a choice of 8- or 11-speed transmissions. 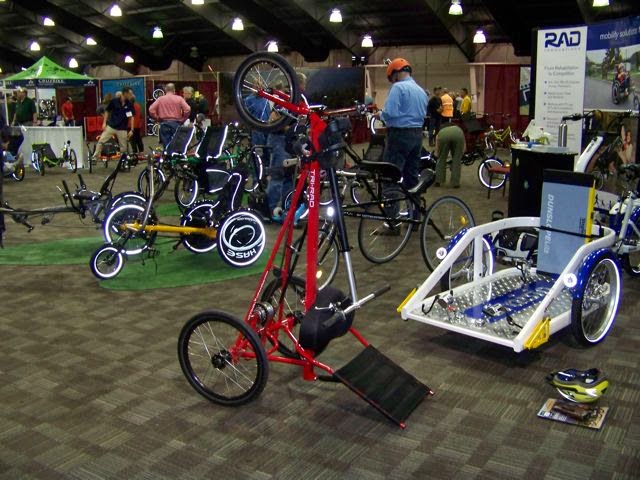 Another view of the Rad-Innovations display area. The Tri-Rad is in front, which would be ideal for anyone who wants a recumbent three-wheeler, but doesn't have much storage space. It sells for around $1,700.  Behind it is a tricycle, pedal-powered by the rider in the rear, with a platform in front for carrying a person in a wheelchair. In addition to cycles for people with disabilities, Rad-Innovations also is a distributor of Hase Bikes (which makes 2- and 3-wheelers, including some for people with disabilities) and Birdy folding bicycles.