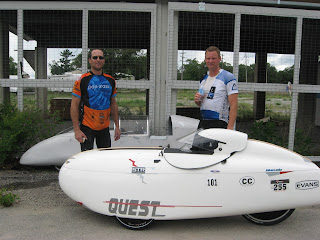 Dave Johnson (left), who won the Black Bear Bicycle Tour four times, finished second this year to Chris Evans, who won in a record time of 3:36.09 for the 102 miles. Both are standing behind Chris' carbon fiber Quest; Dave's Great White is behind them. Photo was taken after they finished.

Chris Evans, 45, of Flint, riding his carbon fiber Quest velomobile, "won" the Avita Water Black Bear Bicycle Tour July 28, 2013, finishing the 102 miles between Grayling and Oscoda in a record time of 3 hours, 36 minutes and 9 seconds.
Second fastest was David Johnson, 56, of Olivet in his Great White two-wheel streamliner, 3:43.25. It was the fifth time Dave has run the Black Bear and the first time he didn't win. He held the previous record of 3:37.39, set in 2004, which was the first year he participated.
Officially, there's no overall winner and no special award or trophy for being the fastest overall. Chris won the recumbent class and Dave finished second.  The only other rider in the recumbent class was Tedd Wheeler of Reed City, who rode his Alleweder velomobile, finishing in a time of 5:20.41.
Third fastest overall was Joshua Forsyth, 22, of Chesaning, who won the men's age 18-30 class in a time of 4:09.33 and fourth fastest was Rob Selley, 62, of Grand Blanc, who won the men's age 61-70 class only 2 seconds slower, 4:09:35. There were 267 riders.
Chris also rode his Quest in 2012, winning the recumbent class in 3:49.1. In prior years, he rode his NoCom low racer, but never was able break 4 hours.
Quest velomobiles are made in the Netherlands and by Bluevelo in Toronto, Ontario, which made Chris' vehicle. Dave's Great White streamliner was built many years ago by Rick Wianecki of Okemos.
Here's Chris' account of this year's Black Bear, from the Bentrideronline discussion group:


Start time 8:25 a.m. was nice that Chris and I both had the same start time. I hope future rides can have the same 8:25 a.m. start time.
I remember the first 50 miles going by quickly because I was just having fun riding behind Chris. On some downhills I would have to brake a little to keep from passing. Sometimes I would be eating or not be paying attention and he would begin to pull away until I pushed hard and caught up.
Then outside McKinley I developed a leg cramp and had trouble pedaling. Going thru McKinley, a gap opened up that I could not close. From that point on I could only see specs of white on the long straightaways. My leg cramps continued to get worse whenever I had to pedal hard.
I've decided this is from not enough miles in Great White this year, only having done Calvin's, Waterford and several rides from the house. I have more miles on single bike and weekly spinning classes at the gym.
On the two large uphills my legs went into total spasm, but for some reason with both legs feeling like they would lock up and shut down, I was able to climb the hills, in pain, at a 6 mile per hour pace, same pace as other years.
On the last stretch of River Road, I was only able to maintain about 26-28 mph. After seeing Chris topping the last major hill I knew he would finish really close to the course record. When I finished 5 minutes off the record and Chris was already in, I knew he had the new record. This was the fifth BB for me, finishing in 3:43:45, which is four seconds slower than the last time I did it in 2010. The first time I did it was in 2004, with a time of 3:37. Looking forward to next year...