The Michigan Human Powered Vehicle Association annual meeting will take place Saturday, March 5, on the Michigan State University campus.
The 32nd annual Michigan Human Powered Vehicle Rally will be Saturday and Sunday, June 18-19, at the Waterford Hills sports car racing track in Clarkston.
The meeting will be in the Erickson Hall Kiva Room, 620 Farm Lane. (Thanks to Tim Potter of MSU Bikes for making the arrangments.) We last met there on Feb. 21, 2009. The meeting will start at 1 p.m., beginning with show-and-tell, so if you have anything pedal-powered to show, please bring it.
The meeting date was set, in part, because the 21st annual Quiet Water Symposium (www.quietwatersymposium.org) takes place that day in the MSU Pavilion, likely from 9-5:30, so there will be time to attend that event, plus the MHPVA meeting.
Despite the "water" in the name, some bicycle organizations will be exhibiting at the symposium, so it might be worth attending, even if you are not a canoeist/kayaker/sailor, etc. Show-and-tell usually lasts at least a half-hour, so if you stay too long at the QWS, please still come to the meeting.
The Kiva Room is on the ground floor, which will make it easy to bring bikes/trikes in and out for show-and-tell.
The International Center Foodcourt is a short walk away (less than 5 minutes). There's a coffee shop that also sells donuts, bagels and pastries. Board members and anyone else who want to meet beforehand for lunch should be there about 11:30-11:45. (But if you prefer to go to the QWS, please do, rather than meeting for lunch.) There’s also a Starbucks in Wells Hall, about the same distance away from Erickson Hall.
Here’s a map link to Erickson Hall: http://maps.msu.edu/interactive/index.phplocation=eh Car and bicycle parking is available outside and is free on Saturdays.
As we discussed at the 2015 annual meeting and HPV rally, the March 5 meeting will likely be the last for the MHPVA, that is, we will dissolve, unless some new people are willing to take over the organization.
Both I and Bill Frey, our treasurer, are in our early 70s and have been involved with the MHPVA since the early days. At the last meeting, we volunteered to become president and treasurer again because no one else wanted the jobs, but did so with the understanding we would only do it for a year.
If you want to read about our discussions regarding the future of the MHPVA – and please do – see the reports on the blog about the last annual meeting, posted March 9, 2015, and the Michigan HPV Rally, posted June 18, 2015.
Bill Frey reminds us that the MHPVA is incorporated, so if it dissolves, the money in our treasury legally must be donated to non-profit organizations, so that will be a topic of discussion. It cannot be divided among the members, nor can we blow the money on a wild (or not-so-wild) party.
An option would be for the MHPVA to continue as a less-formal club, but that would still require someone to be the leader, and we might also need a treasurer.
For now, the MHPVA officers are: President, Mike Eliasohn, St. Joseph; vice president, Mike Mowett, St. Clair Shores; secretary, Paul Pancella, Kalamazoo, treasurer, Bill Frey, Grosse Pointe Farms; and members at-large, Wally Kiehler, Grosse Pointe Woods, and Bob Krzewinski, Ypsilanti.
If anyone reading this has thoughts about the future of the MHPVA, please e-mail me at mikethebike2325@comcast.net.
Even though the MHPVA may come to an end, the Michigan HPV Rally will continue as long as someone is willing to be in charge (thank you, Mike Mowett) and people want to compete. We will discuss the rally at our meeting, but chances are there will be few if any changes from past events. All the details will be published on this blog after the meeting.
At the meeting, we also will be discussing ex-Michiganian Charles Brown's proposal for creation of a sport subclass to the stock class. You can read previous discussion on the blog, "A sport subclass?," posted July 11, 2015.
To qualify for the sport subclass, a riders' eyes would have to be at least 42 inches from the ground. Charles' thinking is that such riders are safer when riding in traffic, since they are more visible to motorists than lower bikes/riders, but have an unfair disadvantage when racing when compared to the low racers.
And speaking of Charles, he spent a lot of time researching, writing and making drawings for his thesis on recumbent design, which was recently posted on www.recumbents.com. It's divided into three parts: Frame design, steering and ride and air drag. It's somewhat technical, but worth reading, or at least looking at. – 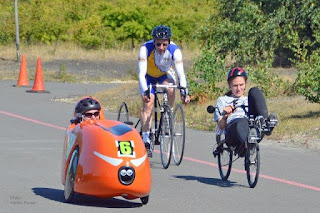 A variety of vehicles raced at Fowlmead.  From left are Ian Perry in a DF velomobile; Mark Vowells on a Ken Rogers tricycle; and Magdalena Williams on a Challenge Fujin Tour.

My friend, Martin Purser, who lives in England, sent me some photos he took at the British Human Power Club races Aug 8-9, 2015, at Fowlmead.
The BHPC is a very active organization, with 11 racing events in 2015, most at auto road racing tracks. Fowlmead was the only two-day event, the rest being one day.
At Fowlmead, several Tricycle Association members participated, including Martin and his wife, Alison, on their tandem trike. Most TA members ride upright trikes – think of a "10-speed" road bike, with two wheels in the rear (or just look at the photos). The Pursers, whom I've known since at least 1980, are both very active in the TA.
I found most of the information for the captions in issues of LaidBack Cyclist, the BHPC magazine. I (Mike) am a member of the BHPC and the TA, both of which publish quarterly magazines (unlike a California-based HPV organization I could name).  The winter 2015-16 issue of LaidBack Cyclist totals 54 pages, including an 18-page report on the World Human Powered Speed Challenge at Battle Mountain, Nev. The autumn 2015 issue of the TA Gazette is 56 pages.
I have some issues of both magazines I don't need to keep. If interested, please e-mail me at mikethebike2325@comcast.net.
The websites for the two organizations are www.bhpc.org.uk and www.tricycleassociation.org.uk. 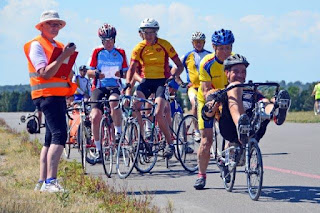 Racers await the one-at-a-time start of the five-lap time trial on the short course (total of 4.05 miles) on Saturday. The longest race at Fowlmead, on Sunday, was 2 hours plus one lap of the long course (1.99 miles).

Tricycle Association President Geoff Booker (standing, wearing yellow jersey) sorts  out the teams for the mixed relay (upright tricycles and various HPVs) at Fowlmead. The teams were selected from aggregate times achieved by competitors in the time trial. 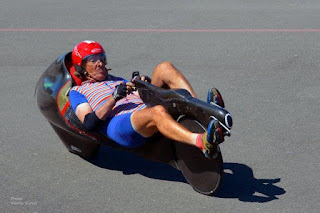 Well-known cycle designer, builder and author Mike Burrows on one of his carbon fiber creations.  He finished 4th overall on Saturday and 13th on Sunday.  The single blade fork is on the left side. The fourth edition of his book, Bicycle Design, was published this year. 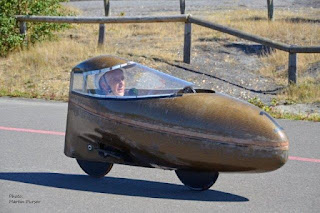 Steve "Slash" Spade in Beano finished first overall on Saturday and Sunday at Fowlmead. He won the 2-hour + 1 lap race Sunday (63.7 miles) at an average speed of 31.3 mph. He also was BHPC 2015 season champion in the open class.  The other classes are partial-faired, unfaired, ladies, ladies partial-faired, street, sports, multi-track, faired multi-track and junior. 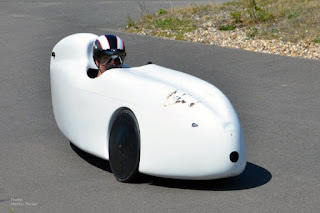 Brian Robertson in a Go-One Evo KS, made in Germany.  At Fowlmead, he was third overall on Saturday and Sunday.  He was BHPC season champion in the faired multi-track class. 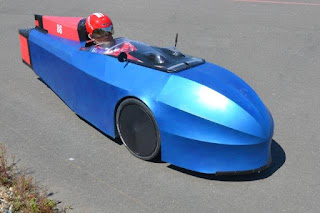 John Lucian in Blue Wave finished 9th overall on Saturday and 8th on Sunday at Fowlmead.  He was second in the faired multi-track class for the season. The fairing appears to be "shrink wrap" aircraft fabric over a tubular (presumably) framework.  Rick Gritters of Iowa used the same technique for building a fairing for his two-wheel low racer. 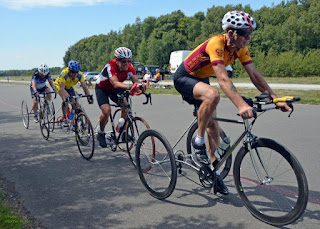 Lez Young (Trykit) leads Sid Charlton (Ken Rogers), Geoff Booker (Trykit)  and Ian Mathews (in rear, Higgins) in this criterium, eventually won by Booker. In addition to being Tricycle Association president, Booker operates Trykit Conversions Ltd., making upright tricycles and conversion axles for mounting to two-wheeler frames. The other current manufacturers of high quality trikes in the U.K. are Longstaff Cycles (two wheels in the rear) and Roman Road Cycles (two wheels in front). The vast majority of TA members ride upright trikes with the two wheels in the rear. 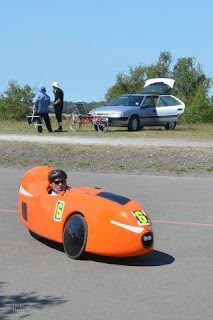 Ian Perry in a DF velomobile finished second overall on both days at Fowlmead.  He's also in the photo at the top of this story.